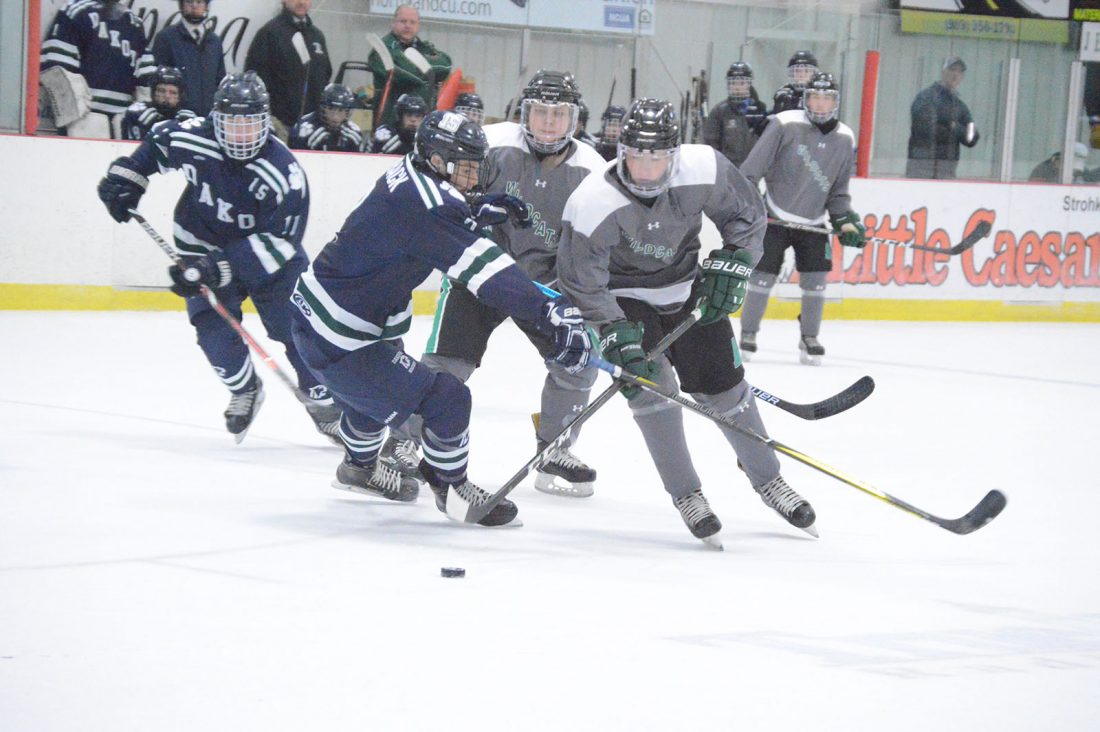 News Photo by James Andersen Alpena's Cam Young, center, battles with Macomb Dakota's Shane Romback for control of the puck during the first period of a hockey game on Saturday at Northern Lights Arena.

Chalk this one up as a learning experience.

Joey Gavlinski scored a natural hat trick and six different players scored for Macomb Dakota as the Cougars skated to an 8-0 mercy-rule win over the Alpena High School hockey team on Saturday at Northern Lights Arena during the final day of the Fall Showcase.

Beset by some injuries to some key players during the game and hindered by numerous penalties, the Wildcats struggled to match Dakota’s intensity and paid for it. Alpena (0-2) was outshot 31-5 for the game with just one shot on goal over the final two periods.

Nate Puma scored with 9:06 left in the third period to give Dakota the mercy-rule win.

“(The lessons we can take from the game are) huge; learning how to compete, the level they have to play (to) at the varsity level, so many great things that we can learn from and know what we have to put in,” Alpena coach Chris Limback said.

Dakota had a goal waved off less than 30 seconds into the game, but it did little to stop the Cougars’ offense. Dakota connected four times on the power-play and held a 3-0 advantage after one period.

Ethan Julin opened the scoring for Dakota with 13:50 left, taking a pass from Galinski across the slot and sliding a puck into an open net.

Shane Perceful put Dakota up by a pair just 1:12 later with the Cougars on the power-play. Perceful drove home a rebound. Dakota connected on the power-play again with 4:20 left as Gavlinski poked a shot past Lightfoot, putting Dakota ahead 3-0.

Limback praised Lightfoot who got the start Saturday as well as Jimmy Bolanowski, who started for Alpena on Friday in a loss to University Liggett.

“I thought our goaltending was great all weekend. I thought Jimmy and Collin played great,” Limback said. “We have to be strong because up front we’re young and our goalies are going to be tested.”

Alpena spent the early part of the middle frame on the penalty kill after being whistled for three penalties in the first seven minutes. The Wildcats held their own, but were dealt another blow when they were called for a major penalty for charging with just over five minutes left.

The Cougars were successful on the subsequent power-play as Gavlinski scored again with 2:47 remaining, burying a point-blank chance after taking a pass from a teammate.

Gavlinski completed his hat trick with 49 seconds left in the frame, banging in a rebound on the power-play to give the Cougars a 5-0 lead.

“We knew they were going to be a good team and it was going to be a great challenge. We were missing some key players, so a lot of kids got some valuable time,” Limback said. “Now they know what they have to do. It’s just one of those days where it’s a good day to learn what it means to be a Wildcat.”

Alpena returns to the ice this weekend for the Thanksgiving Showcase. The Wildcats play Negaunee at 4:30 p.m. on Friday and will play again on Saturday in either the consolation game or the championship game.