Alpena hockey team faces off with Liggett in season opener 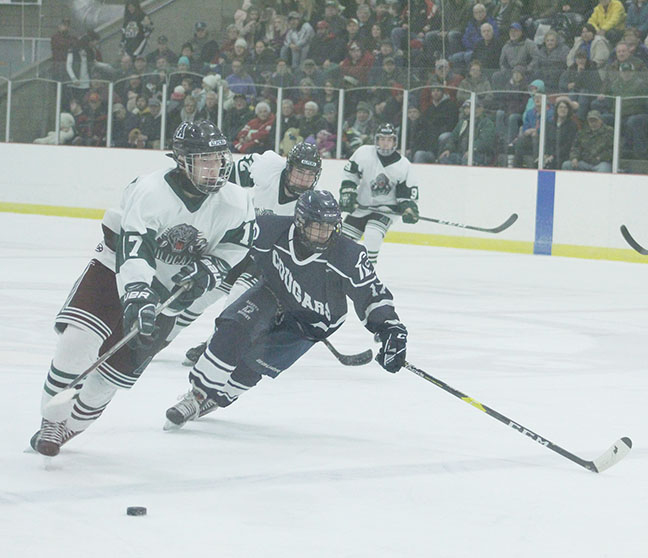 News File Photo Alpena forward Blaise Keller (17) skates up the ice during a hockey game at Northern Lights Arena during the 2018-19 season. Keller and the Wildcats open the 2019-20 season tonight at home against University Liggett.

Last season was special for the Alpena High hockey team.

The 2018-19 Wildcats set a school record for wins (21-5-1), captured both a Big North Conference and regional championship and advanced to the state quarterfinals.

Last year’s Wildcats team raised the bar and put Alpena back on the map, but with last season in the past, what will the future hold for this 2019-20 group of Wildcats?

It will nearly impossible for Alpena to make up for the loss of some of its star seniors from a season ago as their two major goal scorers and point-getters Kyle VanDusen and Colby Plowman both graduated, along with defenseman Owen Limback gone and Dream Team goaltender Cooper Black no longer in the net for Alpena.

A group of players like that doesn’t come around often despite all of the changes heading into tonight’s season opener at Northern Lights Arena, the Wildcats are determined to pick up right where they left off a year ago, continue to excel and carry the torch that has been lit for them.

“I hope there’s just a lot of growth this season. We have a young group and our goal is just going to be to teach the kids how to play and hopefully they learn how to work and play together,” Alpena coach Chris Limback said.

Alpena faces off with Liggett at 6:30 p.m., tonight and will have a fresh group of skaters on a roster consisting of seniors, seven juniors, seven freshman and one sophomore.

Senior goaltender Jimmy Bolanowski returns after spending the past two years backing up Black and will have a larger role this season. Seniors Charlie Halleck, Brett Ciupka and Sean Stevens are the trio of skaters that return from last year’s team.

Matt Thompson is the lone returning sophomore and the freshman class is made up of capable skaters in Jaden Marchlowski, Jack Steinke, Brody Thompson, Anden Marceau, Ian Lightfoot, Cam Young and Easton Schultz.

This year’s team is made up of a perfect balance of new and returning players as they return 11 players from a season ago and welcome in 11 new skaters.

“We have a nice mix of young players and old, new faces and familiar faces, but our goal is to just get better each day,” Limback said. “Mistakes are going to happen this year, we’re going to encourage the kids and as long as they come with a great work ethic and the drive to be successful, good things will happen.”

Alpena will once again be tested this season, beginning this weekend. The Wildcats also Macomb Saturday at 1 p.m.

The Wildcats will play in five showcases including the one beginning tonight. Throughout the season, Alpena will be matched up against traditional downstate hockey powers such as Plymouth, Howell, Flint Powers Catholic and Grand Rapids Catholic Central.

Despite a difficult schedule ahead, the Wildcats are focused on tonight’s game and they’re hoping to prove that Alpena hockey is not only back on the map, but the Wildcats are bound for success once again this year and this group’s quest begins tonight.

“We won’t know what to expect tonight. We’re so much different and my goal for the kids is for them not to get too caught up in the moment,” Limback said. “I want them to be excited, but I want them to come out with a lot of energy. I know a lot of them are going to be on pins and needles with putting the Wildcats jersey on for the first time and for others, it’s not only our first game of a new season, but our first home game. It’s exciting and we’re going to work as hard as we can and hopefully good things will happen.”