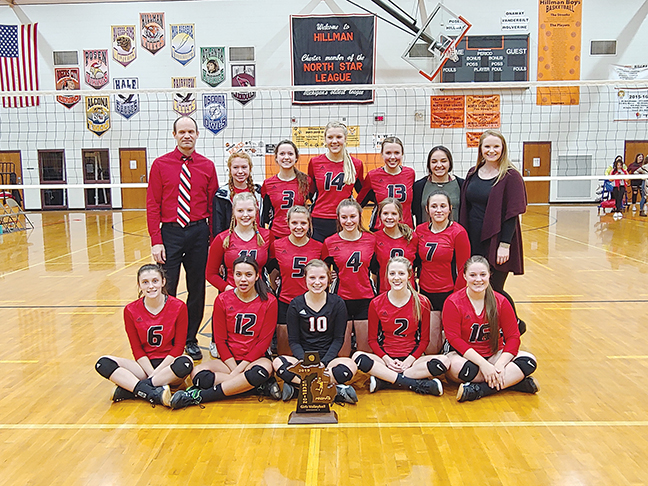 HILLMAN–Onaway coach Steve Watson was left feeling a little disappointed with the way his team played on Wednesday, despite a victory.

He didn’t have many reasons to be disappointed a day later.

Though the Cardinals swept Hillman on Wednesday, they looked less than efficient doing so, leaving Watson wondering how his team would fare a day later.

He got his answer pretty quickly as Onaway raced out to a 16-2 lead in the first set, keeping Posen off balance with a mix of aces, kills and strong net play.

“Winning never gets old, so it’s always enjoyable to do what we did tonight and over the last few days,” Watson said. “I feel like we came out striking the ball really well. I think that in all facets we looked a lot cleaner, a lot more efficient to start the match.”

Posen made things interesting in the third set and led most of the way as Onaway tinkered with its lineup. The Vikings led by as many as five midway through the set, thanks in part to strong play from Madison Menzel in the front row.

Menzel had two kills, two blocks and an ace, collecting both kills and both blocks early in the third set. Onaway rallied to tie the game 18-18 late and the next two points went to Posen.

This proved to be Posen’s last lead as Domke took the match over, recording a kill and three straight aces to give Onaway the lead for good. Earlier in the set, Onaway had all sophomores on the floor as for a time as Watson juggled lineups to give some of Onaway’s younger players a taste of postseason play.

It proved to be a disappointing ending for the Vikings, who played well on Wednesday in a win over Vanderbilt, but couldn’t recapture that same magic on Thursday.

“I’m very happy the girls dug deep in that third game and started doing the little things and came out with a very good effort,” Posen coach Michelle Mulka-Styma said. “Onaway is a well-coached team. Steve Watson does an incredible job in Onaway and (with) some of their hitters we were getting underneath them, we just couldn’t get the pass where we needed the pass to go off the tip.”

The Cardinals eventually finished things off when Mallorie Neelis scored on a push and Cloe Ehrke recorded a kill for the match’s last two points.

After a convincing win in the opening set, Onaway kept surging ahead and raced out to a 13-1 lead to start the second set. A number of Posen’s points came on rare Onaway errors and the Vikings also suffered from numerous attacking errors throughout the match.

Riley Krajniak had three aces and 10 digs for Posen; Mia Newhouse had two kills, three digs and an ace and Makayla Kamyszek had two assists and a block.

Despite the loss, Mulka-Styma was proud of the way her team battled in a game where it was considered the underdog.

“As a coach, I can’t be any prouder of that, because it shows (potential). Give us a couple years and we’re going to be a force to be reckoned with,” Mulka-Styma said. “I’m very proud of the girls and how far they’ve come as a team and how they’ve never given up in a game, no matter how many times they’ve gotten down.”

With a district title in hand, the Cardinals are looking to add more hardware to their resume. To do, they’ll need to stop their Ski Valley Conference rivals one more time.

Both teams made last year’s regional in Mackinaw City, but didn’t play each other. This season, Onaway defeated Pellston in three sets at home in October.