How the Storey goes 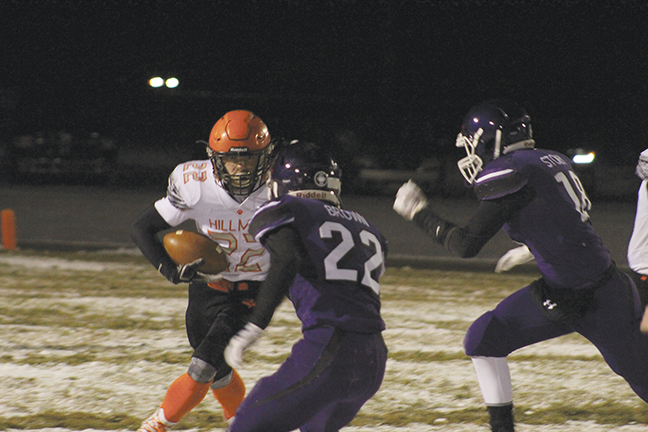 News Photo by Jonny Zawacki Hillman running back Gunner Mellingen (22 in white) tries to elude Pickford defenders during the first quarter of a Division 2 eight-player football game on Friday.

PICKFORD–Entering Friday’s Division 2 eight-player state semifinal contest, the Hillman Tigers knew they faced one of their toughest tests not only of the season, but in program history as they took on No. 2 Pickford with a chance to advance to next Saturday’s state championship game.

The Tigers were aware of how big, physical and talented the Panthers were and knew they needed to keep Pickford quarterback Jimmy Storey in check to have a chance.

Unfortunately, Hillman’s feel good story came to an unfortunate end as Storey and the Panthers ran wild and cruised to a 40-8 victory on Friday at Pickford High School.

“I think the injuries finally caught up to (us) tonight. Take nothing away from Pickford, they are a great team, but I think not having our senior leader at quarterback (Nash Steinke) really hurt us tonight,” Hillman coach Cody Allen said. “I’m proud of the effort the boys put in. They never quit and gave it everything they had against a team that will have a great chance to win a state championship next week. We have nothing to hang our heads about.”

The temperatures were freezing, but Storey and the Pickford offense was on fire all night as the Panthers ran their ground and pound, physical style offense to perfection and went up and down the field all game. For as big and strong as the Panthers were, they were able to match Hillman’s speed and didn’t allow the Tigers much room to operate all night.

Hillman went three and out on its opening possession and was forced to punt.

The Tigers gained a little momentum when they forced a Pickford fumble on their second play from scrimmage and Sean Henigan dove on the loose ball and recovered it to bring the offense back on the field.

Unfortunately for the Tigers they were unable to cash in on the opportunity and the rest of the night belonged to the home team.

Pickford scored on its next five offensive possessions and Storey led the way with 194 yards rushing on 23 carries, one passing touchdown and a pair on the ground.

Storey opened the scoring with 6:53 left in the opening quarter when he marched the Panthers down the field, running over would-be tacklers and eventually powered his way in from seven yards out to put Pickford on top.

The Tigers were forced to punt on three of its five first half possessions and their best drive came with just over a minute remaining in the half when Henigan and the Tigers found success throwing the ball, but ran out of time.

Pickford did what no other team could do this season and limited Tigers star Gunner Mellingen, holding him to just 52 yards rushing.

Storey added another rushing touchdown in the first half and Matt Bush added a second quarter score as Pickford held a comfortable 24-0 halftime lead.

“We found success throwing the ball and did everything we could do to swing the momentum in our favor, but credit to Pickford, they are a strong team,” Allen said. “I just told the guys to keep their heads up and keep fighting like they had all season and they did and I couldn’t be more proud.”

Storey’s final touchdown of the night came with 6:25 left in the third quarter when he connected with Sam Burton for a 44 yard pass and catch to put the Panthers ahead 40-0.

Hillman’s lone score came in the closing minutes as Henigan threw a ball up for Mellingen who came down on with a 14-yard touchdown with 1:17 left.

Despite the unfortunate ending to its season, Hillman made plenty of history in its best season in program history.

The Tigers captured their first ever regional championship, advanced to their first Final Four and set a school record for wins in a season finished with a mark of 10-2.

“It was an incredible season and we all have so much to be proud of,” Allen said. “We made school history, learned a lot of valuable lessons and set the standard moving forward. This was a great group of young men that set the foundation for what we expect out of this program and I think our future looks bright for years to come.”