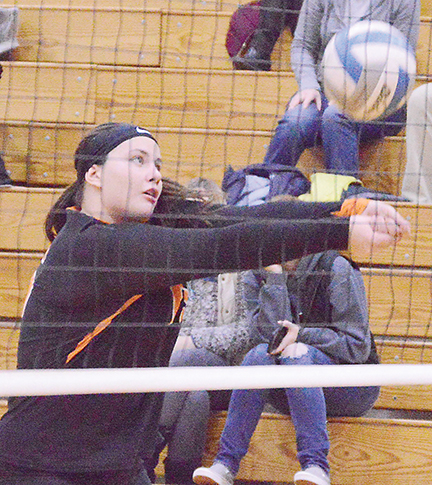 News Photo by James Andersen Hillman’s Ellie Crawford bumps a ball over the net during a Division 4 volleyball district quarterfinal against Wolverine on Monday at Hillman High School.

Weiland’s words didn’t go unheeded and the Tigers found their rhythm when they needed it the most.

Hillman served up nice aces on the way to a dominant finish against Wolverine, beating the Wildcats in four sets at Hillman High School.

Amidst numerous serving and attacking errors on both sides, Hillman overcame a sluggish start and saved its best play for the night’s last set.

Led by Makenna Grulke’s solid all-around play, Hillman began the fourth set on a 9-0, prompting a Wolverine timeout. Hillman didn’t slow down however and ripped off another 8-1 run to take a commanding 17-1 lead.

Though Wolverine committed a few attacking errors to keep Hillman in control of the serve, strong serving by Hillman all but ensured the Wildcats had no chance of catching up. With Grulke serving, she collected five hard hit aces.

In all, Hillman had nine aces in the set and 25 for the match, including 10 from Julia Taratuta.

Grulke was a strong net-front presence for the Tigers all night and had three kills as part of Hillman’s opening run in the final set before keeping Wolverine guessing with her serves.

For the match, Grulke finished with six aces, seven digs, a block and 17 hitting points.

“I told them that they’re a much better team when they’ve having fun, so I told them to have fun (in the fourth set),” Weiland said. “(Makenna) started joking around and she came out and kicked butt. She just took care of it and that was good.”

Sluggish play hurt Hillman in the first set as both teams struggled to find any sort of opening. Neither team led by more than three until late when the Wildcats took advantage of several attacking errors to win the set.

Hillman started the second set on a 6-0 run, but faded fast as Wolverine proceeded to go on a 9-1 run to take the lead. Both teams battled back and forth until strong serving by Crawford tipped the set in Hillman’s favor.

Two major runs helped Hillman take the third set and a 2-1 lead in the match. The first came early on, when Hillman rallied from an 11-7 deficit to tie the set 12-12.

The second run came a short time later as the Tigers started to find a groove and ultimately pushed past the Wildcats. Strong front row play led to several Hillman kills and several Wolverine attacking errors allowed Hillman to take a 22-18 lead before it finished the set off.

It wasn’t the easiest or best looking win, but ultimately Weiland was very pleased to see her team bounce back after some early obstacles.

“That’s one thing they’ve done a couple times this year–they’ve come out from a loss or two losses and come back and won the match. They’re capable of doing it,” Weiland said. “They didn’t play to their (full) potential, but they acknowledged that and did their best and came out with a win.”