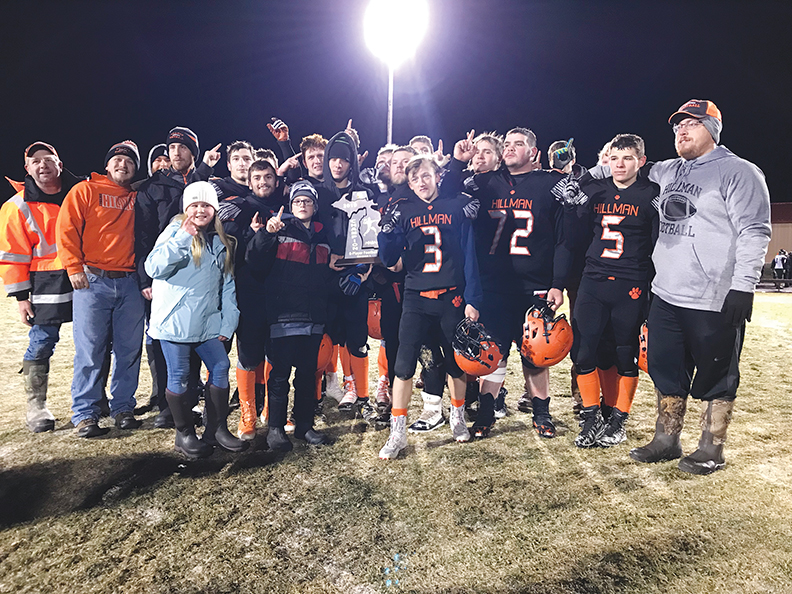 News Photo by Jonny Zawacki The Hillman High football team celebrates after winning its first regional championship in program history. The Tigers defeated Cedarville 48-44 on Friday and set a new school record for wins in a season.

HILLMAN — For the first time in program history, the Hillman Tigers are regional champions.

Hillman entered Friday’s game with a shot to rewrite the record books and put an exclamation point on what has been a dream season.

The Tigers did just that and needed every ounce of effort they had to capture their first regional championship on the gridiron by defeating Cedarville in a 48-44 thriller at Hillman High School.

In doing so, Hillman also set a new program record for wins. 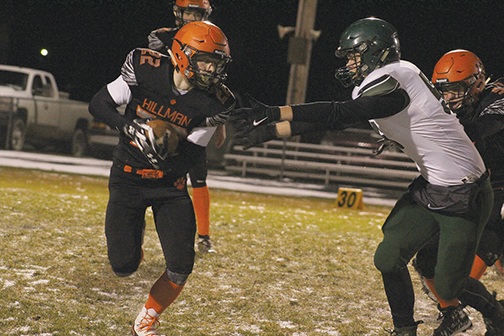 “It’s an amazing feeling. I couldn’t be prouder of the kids, my coaching staff, this program and everyone who has been a part of this program who has laid the foundation for us. It was just an outstanding team effort all around,” Hillman coach Cody Allen said.

The game ended differently than it started as Hillman took the opening possession the length of the field, ran 18 plays and chewed up nearly 10 minutes of clock and took an 8-0 lead after one quarter.

The game was tightly contested and played in below freezing temperatures, but this regional championship matchup turned out to be anything but low scoring, despite Hillman holding a slim 14-12 lead at halftime.

All season, the Tigers have been battle tested and had to overcome adversity and the second half of Friday’s game was no different.

Hillman quarterback Nash Steinke left early in the third quarter with an injury with his team leading 22-12 and did not return.

For most of the season, it was Steinke picking up the slack for injured Tigers, but this time his Hillman teammates returned the favor.

“It means so much for me that my teammates were able to come through. Everyone stepped up tonight and we brought home a regional title,” Steinke said. “It would have been better to finish the game with my teammates, but it means everything in the world to be called regional champions. We knew it was going to be tough coming in, but everyone battled for it and now we can call ourselves champions.”

When the Tigers needed someone to deliver in their biggest game of the year, they turned to Gunner Mellingen and he put the team on his back finishing the game with six total touchdowns. Mellingen rushed for 299 yards and five scores and added another score on a 72 yard kickoff return for a touchdown.

Despite Cedarville having No. 22 circled, the Trojans had no answer for the senior playmaker who put on a show in the most important game of his career.

“When we started the game in the first quarter, I saw that we were going to be able to find success running the ball and I just went in with the mind set that I needed to get it done. Fortunately, we were able to keep pushing and step it up and that’s exactly what we did,” Mellingen said. “Personally, I seen every hole I could possibly go for and ran for as many yards as I could. It’s an amazing feeling and I’m so happy for all of my teammates, my coaches and this school.”

The Tigers drew up a perfect onside kick play coming out of the break and executed to perfection, recovering the kick and taking advantage as Mellingen began heating up with five of his six touchdowns all coming in the second half. He broke touchdown runs of 42, 48, 70 and 34 yards along with a 72 yard kickoff return for a touchdown after Cedarville cut the lead to two early in the third quarter.

“It was a real gritty performance from Gunner. He banged that ankle up again, but there was no way he was going to sit out,” Allen said. “For him to do what he did sets such a tone for the rest of our team when they see that happening, he just elevated out level of play.”

Despite leading 36-20 going into the fourth quarter, Hillman found itself in a back-and-forth heavyweight battle with each team going punch for punch.

The Trojans got back into the game after finding success in the passing game as quarterback Trey Paquin finished the game 17-of-27 passing for 295 yards and five touchdowns.

Paquin’s play helped keep the Trojans in the game and Cedarville eventually took a 44-42 lead with 4:03 left to play when Paquin threw his fifth touchdown of the night, which was an 11-yard strike to Caleb Kohlmann to tie the game at 42.

Cedarville converted the two point try when Paquin scrambled around and slid across the goal line to put the Trojans on top.

“I just told the kids to keep fighting. We’re never out of a game and the effort from this team and the way we come together through all of our injuries and the adversity we faced says a lot about these young men and the character they have,” Allen said.

Unfortunately for the Trojans, they gave Mellingen and the Tigers too much time.

After surrendering a double digit lead and being shorthanded, Hillman stood strong and regained the lead four plays later when Mellingen scored his sixth touchdown of the night on a 34-yard sprint down the sidelines and into the end zone and put the Tigers back on top 48-44 with 2:24 left.

Paquin and the Trojans had three timeouts and plenty of time to march down the field and take the lead and steal the win.

Facing a fourth down and 10 yards to go, Paquin found a wide open Jarret St. Onge for a 31-yard completion to keep the drive alive.

Cedarville converted another fourth down on the drive with 2:09 to play as the Trojans worked their way deep into Hillman territory.

Despite his big night through the air, Paquin threw three costly interceptions, but none more costly than his final one of the night. The Trojans had the ball at Hillman’s 23 yard line and Paquin threw a pass intended for Jay Freel, but Sean Henigan came up with the play of the night, stepping in front of Paquin’s pass and picking the ball off at the 15 yard line.

Two plays later, the Tigers dialed up Mellingen’s number one more time and he answered the call with a 12-yard run to send the home crowd into a frenzy and Hillman into victory formation when Henigan, who filled in for Steinke, took two knees and the clock hit zero and the celebration was on in Hillman.

“Coach Bill (Koenig) laid the foundation for us. He taught us everything that we’re doing right now and without him we wouldn’t be here,” Allen said. “Being able to elevate to where we are now with the way these kids have responded all season is just a great feeling.”

News Photo by Jonny Zawacki The Hillman High football team celebrates after winning its first regional championship in program history. The Tigers defeated Cedarville 48-44 on Friday and set a new school record for wins in a season.