Getting the job done 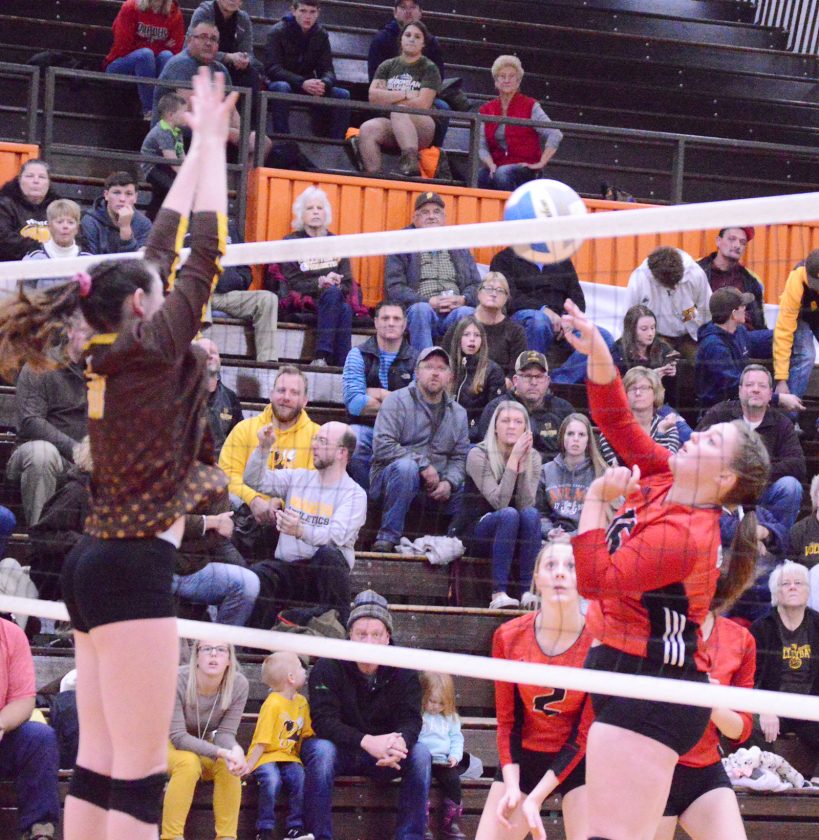 Onaway’s Jackie Sellke (16) hits the ball over the net for a kill during a Division 4 volleyball regional semifinal against Pellston in Cheboygan on Tuesday.

Breya Domke had 14 kills, five aces and three digs and the Cardinals served 23 aces as a team en route to a sweep of Pellston in a Division 4 regional semifinal in Cheboygan.

Propelled by a fast start that saw them get out to a 15-3 lead in the opening set, the Cardinals controlled play for long stretches against the Hornets and never really looked rattled. It was exactly the kind of performance Onaway coach Steve Watson was hoping to see out of his team.

“It’s what we came here to do. Everybody comes to win and you’ve got to go out (and) show up. I think both teams, Pellston and us, we haven’t really pushed a lot yet in the postseason,” Watson said. “A lot of teams can win a district; it’s what can you do after that. I think we played pretty well tonight.”

Onaway looked dominant early, scoring the first eight points of the match on the strength of strong serving. Though Pellston traditionally is one of Onaway’s toughest opponents every year, the Hornets looked out of sync and struggled mightily with their serve receive.

“The first set we were just doing our job. We were serving well and doing everything and I don’t think Pellston looked nervous or anything, they just weren’t passing as well as I’m sure they wanted to, so that really fed into our game,” Watson said. “We got a big lead mostly because our serve wasn’t being returned.”

Pellston rallied late in the opening set, but it proved too little to late as Onaway finished things off. The same thing happened in the second set as Onaway let errors compound and the Hornets opened on a 6-1 run.

The two teams traded points for several volleys, but Onaway eventually pulled away with an eight-point run midway through. Helped by several Pellston attacking errors, Onaway turned an 11-9 deficit into a 16-11 lead and pushed through for another win. Pellston rallied briefly again and made it 24-19 late, but Malaurie McLean finished things off with a well-placed tip to give Onaway a two-set advantage.

The final set of the night proved to be the closest, despite Onaway starting on a 6-1 run. Onaway led 10-5 early, but the Hornets kept things close and toward the end of the set, Onaway held a tentative 17-16 lead.

Such a situation might lead coaches to take a timeout to settle things down, but Watson trusted his team to finish the job. The Cardinals responded in kind as an out of bounds serve by Pellston gave Onaway the ball back. With control of the serve, Domke ripped off three straight aces, tipping the scales in Onaway’s favor the rest of the way.

Once more Pellston rallied and made it 24-20 late, but a serve into the net finished the match and punched Onaway’s ticket to Thursday’s final.

“In the third set I probably should’ve called a timeout when they got to down to one there,” Watson said. “Timeouts are usually to break a run or to reset and the girls got the job done without me having to do that.”