Cedarville’s big-play ability proves too much for Vikings 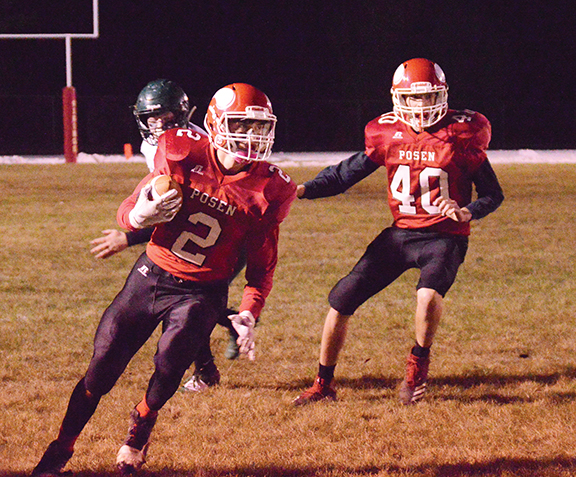 News Photo by James Andersen Posen senior Wyatt Romel (2) turns upfield after catching a pass and looks for open ground during an eight-player football playoff game in Posen on Friday. Also pictured in the photo is Posen senior Eyan Hincka.

POSEN–The Posen football team has proven itself to be resilient this season, overcoming a slow start to the season, injuries and just about any challenge thrown its way.

The Vikings met their match on Friday however and didn’t have enough answers to stop Cedarville, losing to the Trojans 46-26 in an eight-player Division 2 pre-regional at Posen High School.

Grant Fountain ran for four touchdowns and 281 yards for the Trojans (6-4), who advance to play Hillman in a regional final next week in Hillman.

Posen (6-4) looked good early and held the lead twice in the first quarter, but the Vikings’ inability to match Cedarville score for score and big play for big play proved costly as did a few turnovers.

The Vikings trailed 24-14 at halftime and made a late run to pull within 12, but it proved too little, too late.

Tyler Hincka and Chase Dubie had two touchdowns each for the Vikings, who had their season ended by Cedarville for the second consecutive season.

Cedarville scored on its first three drives of the first half along with conversions and overcome an early turnover in the third quarter to score twice more to lead 38-14 with 11:03 to play.

The Trojans took the lead for good with 7:26 left in the first half when quarterback Trey Paquin found Thomas Bohn for a 54-yard touchdown. A subsequent pass from Paquin to Josh Newell for a conversion put the Trojans up 16-14.

Newell finished the game with a four-yard rushing touchdown and 66 rushing yards.

Fountain finished the game with touchdown runs of six, nine, six and 30 yards and Cedarville had nearly a dozen rushing attempts that went for double digits.

Posen was forced to punt on its next possession and Cedarville struck again with 1:44 left, when Fountain found pay dirt from nine yards out. The Vikings were dealt another blow two plays into the next drive when Fountain intercepted Posen quarterback George Kroll.

Dubie found the end zone on Posen’s first drive, scoring on an 11-yard run and scored again early in the second quarter, catching a six-yard toss from Kroll and caught the ensuing conversion pass to put Posen up 14-8.

He finished the game with 33 yards on the ground and caught six passes for 48 yards.

Posen got a break on the first drive of the third quarter when Gage Kasubowski recovered a fumble. The break was short lived however as Kroll was intercepted again four plays later and Newell scored on a four-yard run on the ensuing drive to make it 30-14.

Fountain added a six-yard score with 11:03 left in the game and scored again with 2:30 left from 60 yards out.

Trailing by 24, the Vikings refused to quit and scored their last 12 points in just over two minutes of game time. Hincka broke free for a 78-yard scamper with 5:40 left and found pay dirt again with 3:24 left, making it 38-26.

Hincka finished the game with 186 yards on 23 carries, adding to his own single-season program rushing record.

I can’t say enough good things about this group. Some kids played with a lot of heart tonight. We were down, our backs were against the wall and we just kept scratching and clawing and made it a game,” Pietsch said. “I’m really proud of these guys.”

The end of Friday’s game was an emotional one for Posen, especially for the Vikings’ 11 seniors, who were praised by Pietsch for their leadership.

Posen started the season 0-2 with a pair of tough losses, but regrouped and rallied to win six of its final seven games to secure a playoff spot for the third time in five seasons.

Our seniors are irreplaceable, they were just an amazing group of kids,” Pietsch said. “They just love to win and it’s just been great seeing them grow throughout the years into hard-working young men with dreams and goals.”

OSCODA–The Oscoda football team started fast and raced out to a 12-0 lead on Friday, but couldn’t stop McBain from rallying and ultimately lost to the Ramblers 14-12 in a Division 7 playoff game.

No further details on the game were available at press time. They will be made available in a future edition of The News.