Vikings struggle to communicate in loss to Harbor Light 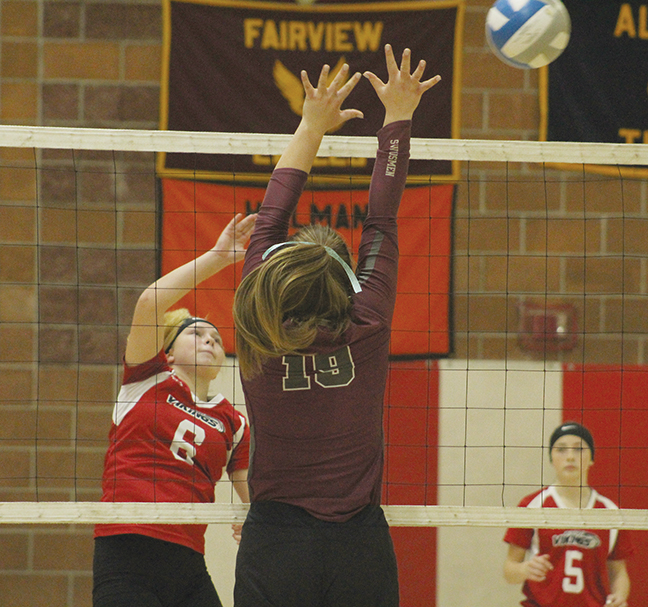 News Photo by Jonny Zawacki Posen’s Ava Wesner (6) tries to hit a ball past Harbor Light defender Olivia Gahn (19) during the third set of a volleyball match on Monday at Posen High School.

POSEN — With the volleyball season winding down, the Posen Vikings have been doing their best to battle through injuries and adjust different lineups and rotations.

But the adjusting hasn’t been easy and the struggles continued Monday as Posen’s failure to communicate hurt it as the Vikings were swept by Harbor Light, 25-12, 25-19 and 25-16 at Posen High School.

“I was really happy with the team’s effort when they came together and talked to each other, especially having to flip to rotation around because our tallest girl is injured,” Posen coach Michelle Mulka-Styma said. “The effort they put forth when they were down, I’m really proud of that, but the girls made a lot of mistakes and gave them (Harbor Light) a lot of points, so in that aspect, I’m not too happy and we have to work harder at practice on communicating and doing those little things.”

The mistakes started early as Posen fell behind early in the opening set and couldn’t come back, beginning a trend that was the story of the entire match.

The Vikings were unable put up much of a fight dropping the first set and despite taking an early lead in the second set, the Swordsmen went on an 11-1 run to take a 12-6 lead midway through.

The bright spot of the night came when Posen battled right back after Harbor Light’s long run as the Vikings responded with six straight to tie the game at 12, but the Swordsmen scored seven of the next eight points to take the lead and rallied to take the second set and grab a commanding lead.

“It’s so difficult to juggle everything around, especially because we don’t have a lot of girls capable of playing in the middle because of our lack of size. It’s hard to rotate and juggle it all around while switching offenses,” Mulka-Styma said. “It was frustrating at times tonight because a lot of it is about the basic which the girls should know. It’s about communicating and reading the ball and were were doing none of those things tonight and it was frustrating because it’s so close to districts and our tournaments coming up, we’re still not able to fix the little things.”

Posen got out to an early 9-6 lead in the third set, but once again the Swordsmen went on a long run, this time scoring nine of the next 11 points to take a 15-11 lead and then went on a 10-4 run to close out the match.

“One of the positives that we can take from a game like this is we did have a lot of mixing and matching and a lot of girls played positions they don’t normally play so if we’re ever in need of someone to play somewhere else on the floor we have those options available,” Mulka-Styma said. “I’m proud of how hard we worked, but we just need to work on fixing those little things in order for us to get better and fortunately for us we have time to correct those things.”

The Vikings were led by senior Riley Krajniak who finished the night with eight kills and seven digs. Ava Wesner dished out seven assists, one ace and one kill. Hailey Styma added nine digs and Mia Newhouse chipped in with six digs and a pair of aces.

Posen will return to action on Saturday when it travels to Alcona for the North Star League championships.