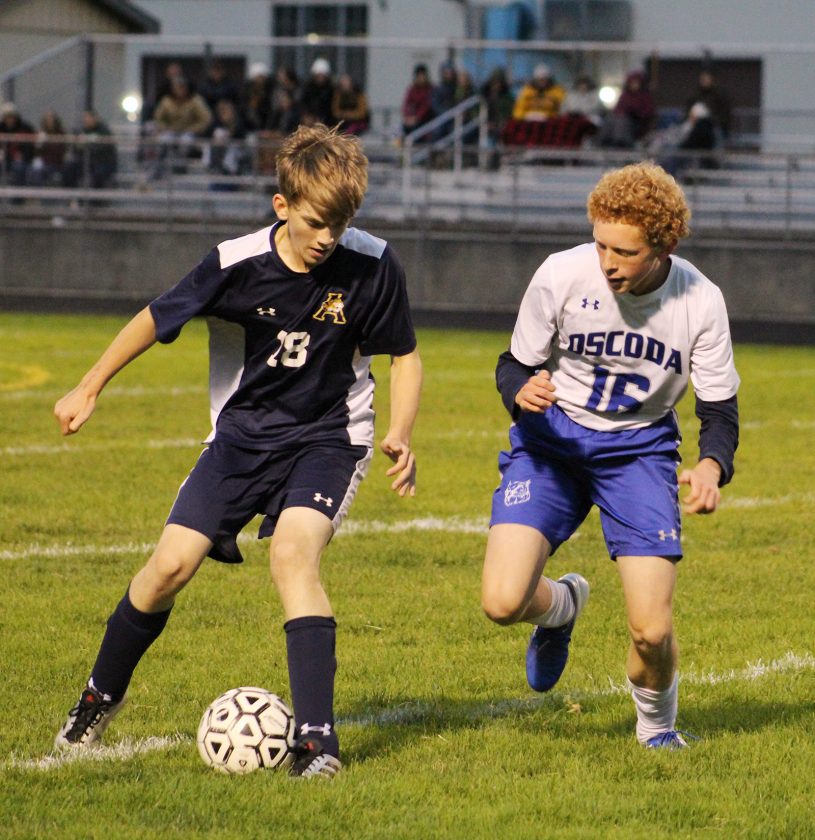 News Photos by Jonny Zawacki Alcona’s Maxwell Martin (18) gains possession of a ball while being defended by Oscoda’s Shane Nowiski (16) during a North Star League soccer match on Wednesday at Alcona High School. The Tigers and Owls tied 1-1. With the tie, Alcona clinched an outright NSL championship on its home field.

LINCOLN — For the Alcona soccer team, playing to a tie has never felt sweeter.

On Wednesday, the Tigers played host to North Star League rival Oscoda in a game that was going to decide the teams’ NSL fate. With an Alcona win or tie, the Tigers would claim the outright title and a loss, the two teams would share league championship honors for the second consecutive year.

Despite not being in a sharing mood, Alcona played its NSL foes to 1-1 tie at Alcona High School, but did enough to be able to celebrate and outright league championship on its own field.

“We wanted to win the game, but if we were ever going to tie a game, tonight was a time to do it with our league championship on the line. I hate ties, but it is what it is and I hope we can learn from this and progress from here,” Alcona coach Tim Munro said. “It was a tough game, it always is against Oscoda. We actually shared the league title with Oscoda last year so it was very good for us to actually win it outright this year and to do it on our home field is good stuff.”

The league-deciding matchup looked as if it was going to be a high scoring contest as the two teams exchanged a goal in the first eight minutes of the game.

The Tigers opened the scoring three minutes into the game when Muslim Meiram got just enough of a ball that slowly got past the Oscoda defense and made its way past the Owls goalkeeper and into the back of the net.

Oscoda responded by applying quick pressure on the Tigers and doing all they could to quickly score a goal of their own and that’s exactly what they did less than five minutes later when Wyatt Sturk fired a shot off of a free kick that found the back of the net.

From their, the Tigers and Owls played even the rest of the way with a few chances apiece throughout the match.

“We scored the first goal and they quickly got one back and then basically we played 50 or 60 minutes of even soccer and it was tied the rest of the way,” Munro said. “We’re going to play them (Oscoda) again in the first game of districts next week and hopefully we’ll be able to put the ball in the net, it’s simple, it’s soccer.”

Alcona’s best chance to regain its lead came with 15:30 left in the first half when Joel Steiner sent a ball towards the net from 25 yards out on a free kick, but the ball hit the cross bar and deflected out in front of the net.

The Owls had an opportunity of their own two minutes later, but they also just missed on a free kick that sailed over the top corner of the net.

Both teams went into the half tied at one apiece and the second half was a back and forth battle that didn’t feature much for scoring chances as the cold wind began playing a slight factor and neither team was able to get any real good shots at the net to create scoring opportunities.

The two teams will meet again next Wednesday at 5 p.m. with the stakes even higher as one team will advance in the state tournament, while the other will have its season come to an end.

“This team has really progressed through the season and we’re getting better,” Munro said. “We’re looking forward to the challenges the rest of the season and hopefully we’ll be able to finish up our regular season on Friday with a win and carry that momentum and build on that and win next Wednesday and keep our season alive.”