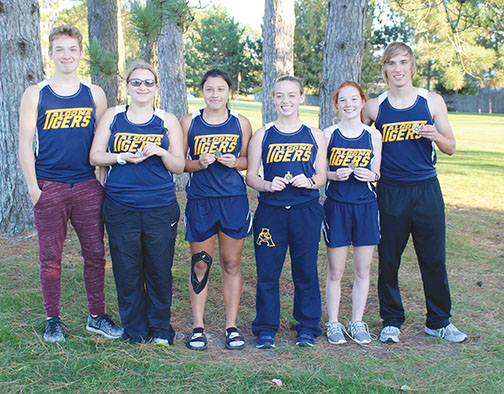 Ellis will go on to the state finals this weekend at Michigan State University.

Traverse City West’s Anci Dy was the medalist with a score of 76, and Harbor Springs won the invitational with a team score of 358.

OSCODA–The Alcona soccer team’s postseason run came to an end on Monday with a 4-0 district loss to Midland Cavalry Baptist in Oscoda.

Midland held a 3-0 lead at halftime and added one more goal in the second half.

Alcona keeper Aidan Wrobel made 11 saves and the Tigers finished the season with a 10-6-1 record.

“We ended up with a good season. We won the league and won a district game,” Alcona coach Tim Munro said. “We graduate five seniors and we’re looking forward to next year.”

ONAWAY–In one of its toughest tests of the season, the Onaway volleyball team came up short.

The Cardinals were swept by Beaverton–the eighth ranked in Division 3–19-25, 10-25 and 15-25 in a match where Onaway coach Steve Watson said they made two many mistakes and couldn’t rebound after a first set loss.

Onaway plays at Bellaire on Tuesday and at St. Louis in a tournament on Saturday.