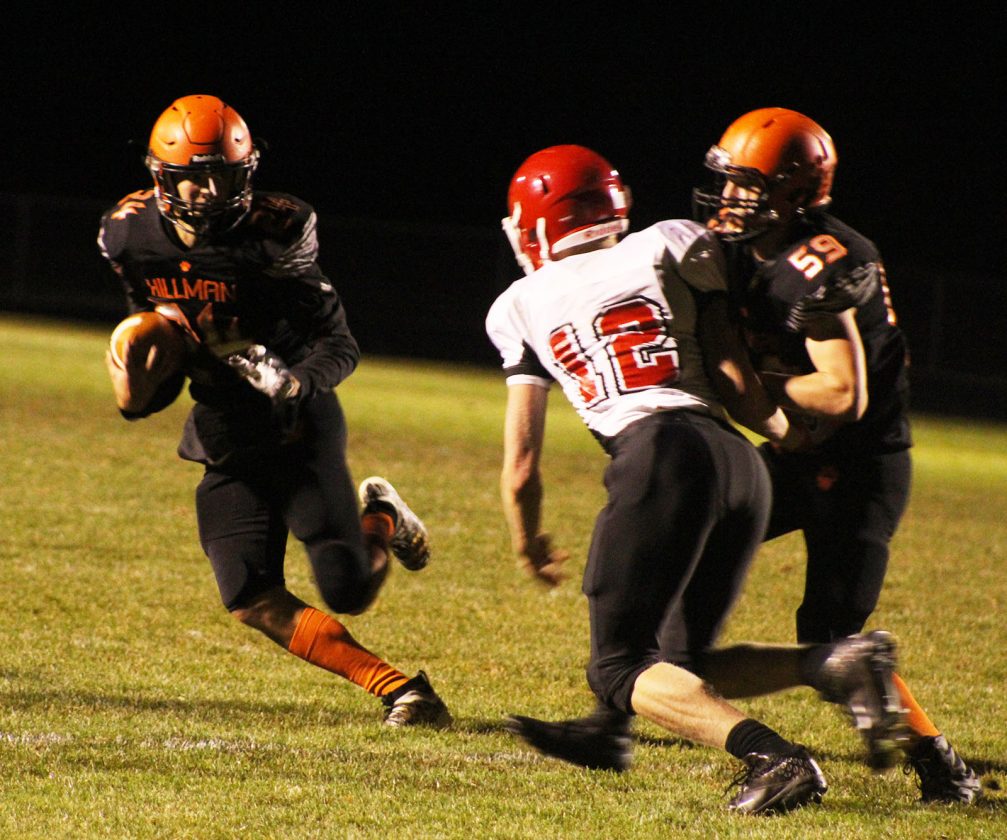 News Photo by Jonny Zawacki Hillman quarterback Nash Steinke (24) tries to get around a Zachary Kazyaka (59) block of Onaway defender Jager Mix (12) during the second quarter of a football game on Friday at Hillman High School.

HILLMAN — There couldn’t have been a better way for a team to start a football game than how the Hillman Tigers opened Friday’s contest against Onaway.

Playing in their final regular season home game of the season and despite being banged up, the Tigers (7-1) continue to find ways to shut opponents down and discover new big play threats on both sides of the football.

Hillman raced out to a 32-0 lead in the opening quarter and everything went right for the Tigers as they cruised to a huge 46-8 victory over Onaway.

The Cardinals (4-4) fell in a hole early as they coughed up the football on their first two possessions and Hillman made them pay.

On the Tigers’ third play from scrimmage, quarterback Nash Steinke broke free, eluded a handful of Cardinals and scored a 65 yard touchdown to get Hillman rolling.

On Hillman’s second offensive possession, Steinke broke a 28 yard run which set up Caleb Sanders, who muscled his way into the end zone from five yards out and the Tigers were up 16-0 less than five minutes into the game.

The Tigers turned Onaway over on downs on its next possession and Hillman put together a nine play drive that resulted in Sanders’ second score of the night, this one from two yards out.

Things kept getting worse for the Cardinals as they turned the ball over for the third time when Sean Henigan intercepted a Austin Nash pass to give the ball back to the Tigers.

Hillman completed a near-perfect quarter as Steinke connected with Gunner Mellingen on a 45-yard pitch and catch for a touchdown and the Tigers were successful on all four offensive possessions in the quarter, holding a 32-0 lead after one.

One of the few problems Hillman faced in its lopsided win was Mellingen reaggravated an injury on the touchdown reception, was taken out of the game and did not return.

“It’s been that next man up mentality. I’m very proud of the way all of these guys are playing right now and we’re rolling pretty well,” Allen said. “All of our guys are stepping up big time. Nash has been a tremendous leader for us. Senior leader, this is his first year playing quarterback, but the leadership from him has been tremendous.”

Onaway trailed 32-0 at halftime, but finally got on the board after being held in check up to that point as Kevin Pearson threw a perfect pass to Nash who came down with a 32 yard touchdown grab. It was the only scoring the Cardinals could muster and the touchdown pass was just one of few big plays Onaway came up with.

Hillman responded with two scores in the third quarter, one on a four yard plunge from Henigan and the other came through the air as Steinke dropped a dime in the waiting arms of Henigan for a 24-yard pitch and catch.

Steinke recorded 238 yards of total offense, 122 coming through the air as he went 5-for-8 passing to go with a pair of scores. The senior signal caller also led the Tigers in rushing with 116 yards on eight attempts.

Henigan added 196 yards combined on the ground and in the air. Henigan toted the rock 16 times for 114 yards and caught three passes for 82 yards to go along with his two scores. Defensively, Henigan intercepted a pass and recovered a fumble and Matt Armon and Zachary Kazyaka each recovered a fumble.

Onaway turned the ball over five times in the game and will look to bounce back in next weeks regular season finale against Bellaire. The Cardinals are in the same position they were in a season ago, needing a win in the final week.

Hillman travels to Atlanta with the hopes of winning its eighth game and possibly returning back home in Week 10 to host its second playoff game in as many years.