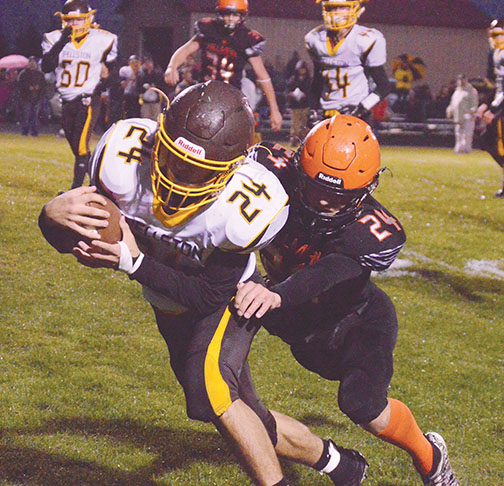 News Photo by James Andersen Hillman defender Nash Steinke, right, wraps up a Pellston runner during the first half of a football game at Hillman High School on Friday.

Caleb Sanders scored a pair of touchdowns to help the Tigers romp past Pellston 38-14 at Hillman High School and secure a playoff berth with their sixth win this season.

On a night when rainy conditions and a slippery ball necessitated sticking to the run game, Hillman (6-1) stuck to its bread and butter power running attack to pull out the win.

The Tigers led 16-14 at halftime and pulled away from the Hornets with a pair of third quarter touchdowns.

“That’s what we pride ourselves on is being able to grind a game out. We’ve been struggling this year for a little bit, but our guys work really hard in practice all week and it pays off,” Hillman coach Cody Allen said. “It feels good when it pays off in a game.”

Sanders was banged off after a Week 5 loss to Mio and missed last week’s win over Bellaire. He returned to form on Friday, finishing with 102 yards on 21 carries a touchdown. He came up big on special teams too, scoring on a 65-yard kickoff return in the first half.

“It’s a big boost of energy. He runs the ball tough and he makes some big plays for us,” Allen said of Sanders. “When he makes the big plays, you see the sideline going crazy and all that, but it’s fun to see.”

Sean Henigan, Nick Zimmer and Nash Steinke each had a rushing touchdown for the Tigers, who scored at least 35 points for the fifth time this season.

Dawson Ableidinger had 13 tackles and Zimmer added 12 as the Tigers balanced their ground-and-pound offense with an inspired defensive effort. Hillman grounded a Pellston offense that came in averaging nearly 50 points a game and recovered a pair of fumbles.

Pellston (6-1) picked up its fair share of yards on the ground, but was limited through the air as the Hornets completed just one of 17 pass attempts.

Pellston quarterback Glenn Bonter rushed 19 times for 95 yards for the Hornets, but Pellston’s inability to establish a passing game in the rain and several big defensive stops by Hillman resulted in the Hornets turning the ball over on downs many times. Pellston held the lead two different times in the first quarter, but couldn’t do much in the final 36 minutes.

The Hornets caught Hillman off guard early in the game after scoring on a kickoff return, but the surprise didn’t last long as Sanders took the ensuing kickoff to the house and scored on a conversion to give Hillman a 16-14 lead late in the first quarter.

Sanders added a three-yard touchdown late in the third quarter, leaping into the end zone from three yards out. He ran in the conversion to push Hillman’s lead to 24-14.

Zimmer, who led Hillman in rushing with 140 yards on 18 carries, scored with 1:19 left in the third quarter, finding room to scamper 24 yards to pay dirt and also added a conversion to make it 32-14.

Steinke finished with 109 yards on 19 carries for the night and scored Hillman’s first touchdown, scooting just inside the right pylon for a score from eight yards out late in the first quarter.

Hillman led 32-14 after three quarters and Henigan completed the night’s scoring with a nine-yard touchdown run with 26 seconds to play.

After losing a physical contest to Mio two weeks ago, Hillman has responded well despite missing several key players in its lineup. Allen attributes that to his team’s willingness to step up and said Friday’s win just means Hillman must keep pressing forward.

“It’s just heart. Everybody’s playing with heart. It’s always tough with injuries, but everyone’s playing with heart,” Allen said. “We always want to keep that playoff streak going. Now we’re looking forward to the conference title. We’ve got to put our heads down and keep grinding.”

The Tigers play Onaway next week.