A dream is realized 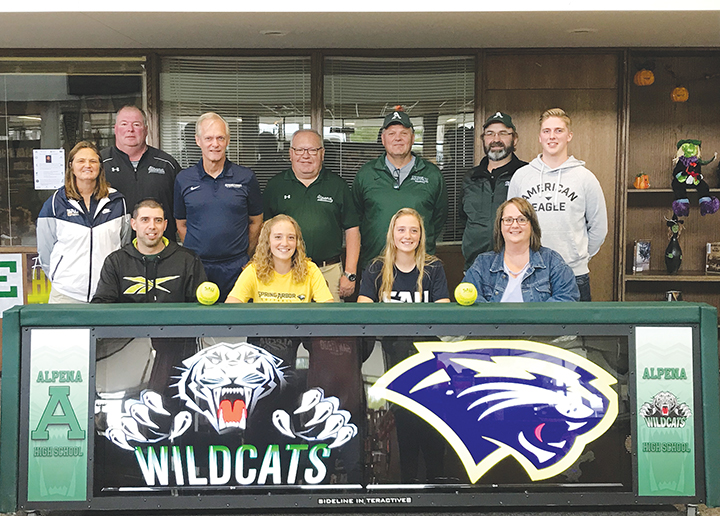 Growing up, Allie Funk and Abbie Funk always had a dream of playing college softball.

On Tuesday, that dream became a reality for the two sisters and it’s one they’ll get to experience together after both of them signed their letters of intent to play softball at Spring Arbor University.

For the two sisters, who will be seniors for the Alpena High softball team this spring, Tuesday’s signing came as both a relief and a testament to the hard work they’ve put in during their high school careers.

“My Dad always pushed us to never settle. He said, ‘If you have a goal, go for it,” Allie said. “It feels amazing. As a child, it was always my goal and it feels so great.”

Spring Arbor has a great deal of recent history with Alpena’s program. Former Alpena softball players Lauren (Heath) Wirgau and Jessica Marwede signed to play with the Cougars in 2015 and 2017 respectively.

By signing the Funks to her Spring Arbor program, head coach Deb Thompson is getting a pair of players who have a knack for solid play both offensively and defensively.

Abbie was a Division 1 all-state honorable mention and all-Big North Conference selection last season as Alpena’s starting second baseman. She batted .400 for the Wildcats with 56 hits, 25 RBI and 13 doubles and was solid defensively, recording a fielding percentage of .962 with 57 assists.

As Alpena’s starting catcher, Allie was an all-region and all-conference selection. She batted .433 for the season with 52 hits, eight doubles, 30 RBI and 26 runs scored. Defensively, she had a fielding percentage of .991 and threw out eight of 17 steal attempts.

The twins visited the school in Spring Arbor last year and made a second visit a few weeks ago during a recruiting weekend. While there, they got a chance to chat up Thompson and her staff as well as Spring Arbor players.

Thompson and her assistant Craig Withrow watched the Funk sisters several times last season, both during the high school season and during travel ball in the summer.

“I like the coaches a lot. They’re super nice,” Abbie said. “It’s a small school, it’s got good Christian values and we really liked the campus.”

Both Funk sisters said the transition to college softball will be different. Spring Arbor is more than four hours away from Alpena and balancing classes with a more demanding softball schedule will be a challenge; nonetheless it’s one they say they’re prepared for.

“Being away from home will be kind of hard, but I’m very excited to play for Spring Arbor,” Abbie said. “It feels great (to sign) and there’s a lot less pressure (because) we’re not stressed out about where we’re going anymore.”