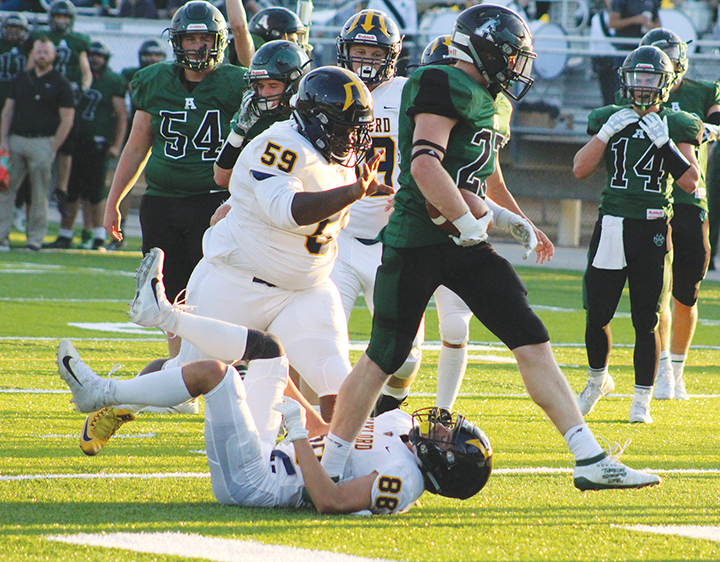 News photo by Jonny Zawacki Alpena running back Jordan Schultz (27) runs over a Gaylord defender on his way to the end zone for the first touchdown of a Big North Conference football game on Saturday at Park Family Field at Wildcat Stadium.

A week ago, the Alpena High football team was left with a sour taste in its mouth after dropping its second game in as many tries and watching its opponent celebrate on its home field.

What a difference a week can make.

The Wildcats put together a strong week of practice and gathered themselves, focusing on the Big North Conference opener. On Saturday, Alpena put together one of its most dominant performances in recent memory as it rolled past Gaylord 30-6 at Park Family Field at Wildcat Stadium.

“I’m so happy for the kids right now. Obviously what happened last week was tough, but we had a great week of practice, used the extra day to our advantage and you saw a different team tonight,” Alpena coach Eric Mitchell said. “It’s not like we’ve been saving it, we’ve known we had it in us, but tonight we just played our style of football and we ran it down their throat.”

Alpena’s win Saturday marked its first of the season and also first under Mitchell as the Wildcats improved to 1-2 and begin BNC play with an undefeated record.

From start to finish, the Wildcats dominated and controlled the line of scrimmage on both sides of the ball.

The lone Alpena mistake came on its opening possession when quarterback Ryan Voltz coughed up the ball, but Voltz and the rest of the offense would make up for it and the defense clamped down all game.

The Wildcats opened the scoring with 53 seconds remaining in the first quarter when Jordan Schultz capped off eight play, 69-yard drive by running over a host of Gaylord defenders on his way to a three yard touchdown run to put Alpena up 7-0.

The Wildcats extended their lead midway through the second quarter as Charlie Williams found pay dirt from six yards out to out the home team up 14-0 after Alpena recovered a fumble at the Blue Devils’ 20 yard line.

Alpena capped a near perfect half by completing a 13 play, 79 yard drive that resulted in Voltz throwing a perfect pass to Kelley Stark, who made a stellar catch in the back corner of the end zone for a 30 yard score with 13 seconds remaining in the half to send Alpena into halftime with a 20-0 lead.

“We always say that if our offensive line can allow our skill guys to get the first three yards, they’ll do the rest and they did tonight. We controlled the trenches,” Mitchell said. “We start off undefeated in the conference and this was a big win for us.”

The third quarter was more of the same as Alpena continued to flex its muscle and build on the lead.

Schultz took a handoff early in the third quarter, bounced off of a few would-be tacklers and raced 68 yards into the end zone for his second score of the game to extend the lead to 27-0.

Kicker Hunter Canute finished the scoring with a 22-yard field goal with 4:34 left in the third quarter which gave Alpena a 30-0 lead.

Gaylord’s lone score on the night came with 5:34 left to play when Jacob Cleaver scored a 63-yard touchdown on an end around. It was the lone bright spot for the Blue Devils as the Wildcats’ defense held them to just over 200 yards of total offense.

Schultz led Alpena with 131 yards on 13 carries including the two scores. Eli Winter toted the rock 17 times for 113 yards and Williams finished with 61 yards on 15 carries and a score.

Alpena will complete a three game home stand on Friday when they host Cadillac in a matchup between unbeaten BNC teams.

“Once again we are going to prepare for a dog fight. Fortunately we didn’t have to deal with much adversity tonight, but I expect us having to deal with some Friday night so we have o be prepared and figure out how to respond from that,” Mitchell said. “Tonight’s win gave us a lot of confidence and that’s what we needed. We were all down after last week and we needed to respond and gain some confidence and that’s what we did with a win like this.”