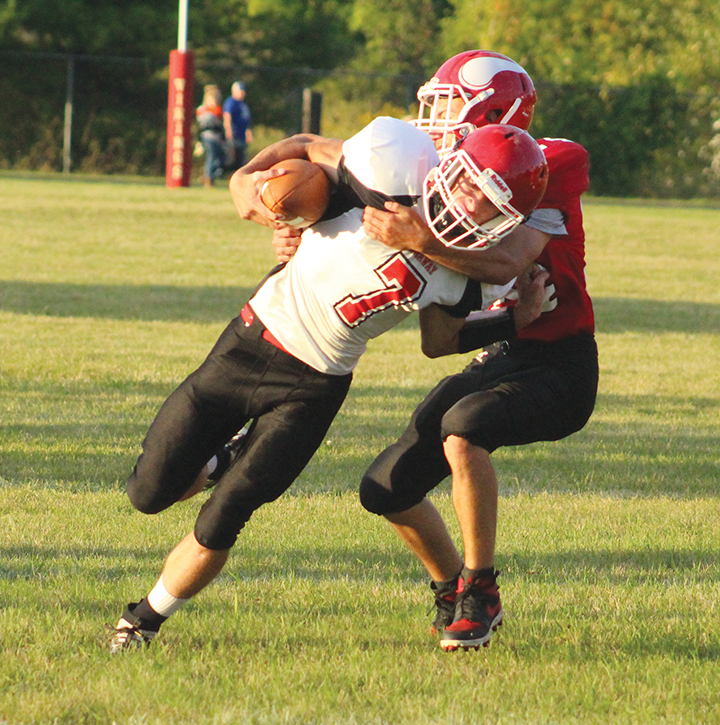 The Vikings entered Friday night’s contest against unbeaten Presque Isle rival Onaway banged up, missing a few key starters, in search of their first win of the year and wanting to avoid falling into an 0-3 hole to begin the year.

Posen (1-2) overcame the adversity and put together its best effort of the season, defeating Onaway (2-1) by a score of 40-20 at Posen High School.

“We didn’t really feel like it was a must-win and I thought we had a solid game plan and we told our guys to just cut it loose tonight and focus on football and not think of the outcome and just play your heart out,” Posen coach Greg Pietsch said. “We executed on offense and made some plays defensively and we were able to get this one and it was huge.”

The Vikings were forced three and out on the opening possession of the game and punted to Onaway.

The Cardinals seized momentum right away as they went 53 yards on seven plays and scored on a four-yard touchdown run by quarterback Austin Nash to take an 8-0 lead less than four minutes into the game.

Posen was forced three and out on its second possession and seemed flat in the early going.

The Cardinals took over deep in their own territory and faced a fourth-and-three at their own 17 yard line. Head coach Steve Klinge elected to go for it and Onaway fumbled the snap, turning the ball over to the Vikings at the 17 yard line.

Posen got fired up and shifted the momentum which proved to be one of the bigger moments of the first half. One play later, Posen running back Tyler Hincka reached pay dirt from 17 yards out and the Vikings tied the game at eight.

“It was a big swing and you can second guess everything you do so once I make a call, I’m just kind of going with it, especially in the first quarter. Looking back, I probably wouldn’t do it again, but I can’t second guess everything I do,” Klinge said. “The mistakes we made tonight were huge. We put the ball on the ground too much. I just told the guys we have to stay mentally tough and if we’re not, we’re going to end up folding the rest of the year. It’s all right in the head for us.”

The teams remained tied 8-8 at the half and the second half featured much more scoring. Ultimately, it belonged to the Vikings, who made adjustments and delivered a healthy dose of Hincka in the second half as he went on to have a huge game.

Hincka found the end zone four times on the night, three of which came in the second half as Posen found success on the ground and broke off a few big plays. Hincka broke free for a 58-yard score to put the Vikings on top 16-8 early in the third quarter and Posen never relinquished the lead. They held a 24-20 advantage heading to the fourth quarter before Hincka and the Vikings iced the game with two fourth quarter touchdowns.

Hincka finished the game with 239 yards on 27 carries and four touchdowns to lead the Vikings to a much-needed win.

“Tyler is a kid that has a heart of gold. He’s 140 pounds, but is all heart. He’s extremely fast, but he’s worked so hard to get to this point and I know what he’s capable of doing and he just showed up tonight,” Pietsch said. “Tyler stepped up and everyone stepped up tonight and I’m so proud of the entire team for the way they played tonight.”

The Vikings’ defense clamped down in the fourth quarter and Posen began to control the line of scrimmage, getting strong performances up front from Gage Kaszubowski, Cameron Freed and Gabe Jakubcin as they ran away with the game in the final quarter to earn their first victory of the season.

“These first three games have made us closer and we’ve found out who we are as a team I think. We found that there are a lot of guys on this team that can play football and that when somebody goes down, it’s next man up,” Pietsch said. “You have to rise up in football. I think when you’re dealt with some adversity and some injuries, good teams can become great. I’m a believer in that if you have the players and I think we have some players that really rose up tonight.”