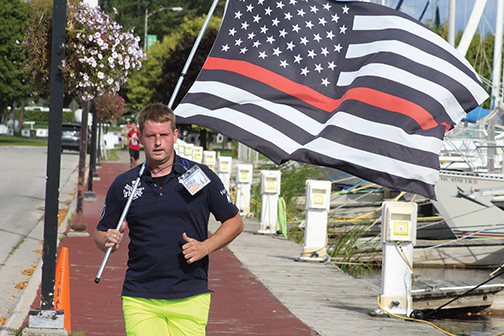 News Photo by Jonny Zawacki Dozens of people participated in the fourth annual Tunnel to Towers 5K in Alpena on Saturday. The event started locally in 2016 and often sees firefighters and local law enforcement running in full gear. Since the event started, more than a thousand people have participated.

The Tunnel to Towers 5K race has been an anticipated fundraiser in Alpena since the annual event began four years ago.

Four years later, the event is still as special and as popular as ever.

The annual event continues to raise money for a great cause, while bringing people together for one special weekend.

On Saturday, Alpena celebrated its fourth annual Tunnel to Towers 5K Walk/Run and once again the event welcomed many in the community, surrounding areas and all over the state to participate in what continues to be one of the most important dates of the year.

“It was an honor and privilege to participate in my first 5K today with a fantastic group of people in the Tunnel to Towers run/walk,” Tunnel to Towers participant Angie Skiba said. “Thank you to all of the firefighters and police officers who lost their lives trying to serve and protect others. God bless them and all of their families.”

The races, which are held nationwide, involve running or walking like a typical 5K, but a Tunnel to Towers run comes with some unique twists. These races often see local fire departments race while running in full gear and local law enforcement and military personnel also have taken part in the races.

Like the past three years, the event was held at the Bay View Park Band Shell in Alpena. A large number of participants gathered near the location, once again sporting their red, white and blue, while firefighters and law enforcement ran in full gear to help raise money and awareness for a special cause.

The funds from the event go towards building homes for injured veterans, which are called smart homes.

The first smart home built in Michigan is in Alpena and these homes enable injured veterans to live a life that they couldn’t live before the injuries.

“It’s an honor to run this race. It’s for something special. I have a lot of respect for the firefighters running in their gear,” Tunnel to Towers participant Rich McDonald said. “I appreciate what this event stands for and that everyone is willing to show support. It’s great to see so many people participate.”

Over the past four years, more than a thousand people have come to Alpena to participate in the event to honor the brave men and women of the United States.