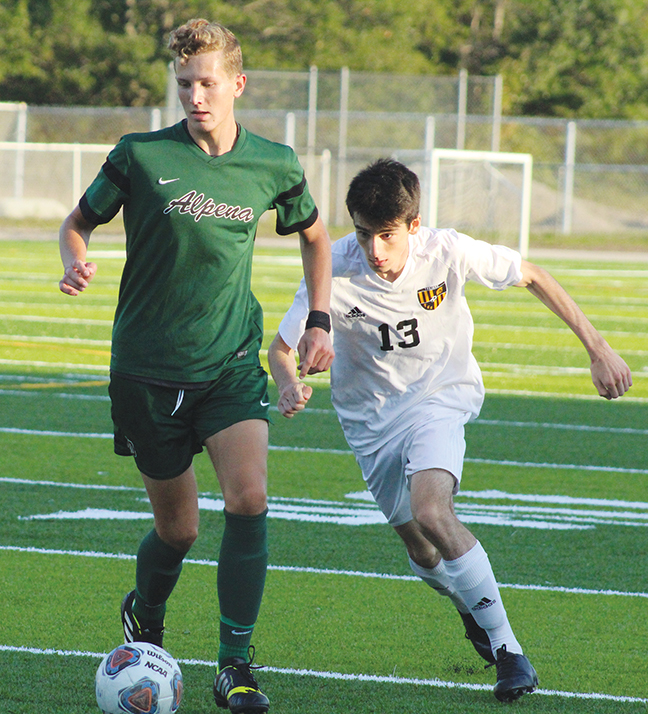 News Photo by Jonny Zawacki Alpena’s Grant Botha (10) dribbles a ball up field and past TC Central defender Ben Post (13) during a Big North Conference soccer match on Thursday at Park Family Field at Wildcat Stadium. Botha returned to the field after missing two weeks with an injury. Botha scored a goal and sparked the Wildcats to a 3-0 victory over the rival Trojans.

Two nights removed from a disappointing defeat to Big North Conference rival Traverse City West, the Alpena High boys soccer team was forced to quickly regroup, put that loss behind them, focus on Traverse City Central and be resilient doing so.

That’s exactly what the Wildcats did.

Alpena (9-2-1, 3-2 BNC) bounced back and picked up another key conference victory, defeating the Trojans 3-0 on Thursday at Park Family Field at Wildcat Stadium.

“I’m happy with the way the boys responded tonight. When we got beat by Gaylord, I told them our next game would be the most important game we played in the season and I said that again after the West shellacking that we took. We just weren’t competitive and I told them this was going to be a bounce back game for us and would define our season,” Alpena coach Tim Storch said. “This win keeps us a contender with both Gaylord and West and prevents us from getting leapfrogged. I’m happy because we have a fighting chance. We’re competitive and we’re going to be a contender all the way through.”

The Wildcats controlled much of the first half, but it took them nearly the entire half to find the back of the net despite a handful of scoring opportunities.

Alpena had a few chances, but sent shots wide and over top of the net.

Alpena’s best chance in the first half came with seven minutes remaining when Craig Tagliareni fired a shot on goal that was on net, but Central goalkeeper Colton Warren lunged and made a spectacular diving save to keep the game scoreless.

Three minutes later, the Wildcats had another opportunity, but this time they didn’t miss as Ivo Arvidsson-Ullberg raced behind Central’s defense and beat Warren with 4:04 remaining in the half to give Alpena a 1-0 lead heading into the break.

“We turn the first round of league play at 3-2 and obviously the goal was to be 5-0, but other than the West game, we had great league games. We could be 4-1 or 3-1-1, but we’ll take 3-2 and that’s what we deserve right now,” Storch said. “The goal is the second time through if we can go 5-0 that gives us a fighting chance. I don’t believe anyone is going to win this league undefeated so I think we still have a shot and a goal to strive for and we’ve never had that. We’ve never been in this position and it’s crazy talk in Alpena soccer history, but it’s nice being able to talk crazy.”

The Wildcats extended the lead to 2-0 early in the second half as Grant Botha collected a rebound in front of the net and scored a goal six minutes into the half.

Botha made an impact in his first game back after an extended absence due to injury and provided a spark for Alpena.

“The biggest adjustment was Grant Botha played. He’s one of our top players and he’s been out for two weeks. Without him, we’re a different team and I think it shows,” Storch said. “He’s a talented player, he’s got size, he’s got strength, he’s technically very gifted and tactically he just gives us a whole different look.”

Alpena netted its third goal of the game with 26:11 left to play and took a 3-0 lead after the Wildcats displayed some great ball movement out in front of the Trojans’ net. Tagliareni got another shot off and this time didn’t miss.

The Wildcats played solid the rest of the game and got great goaltending from Wenton Harrison who picked up another shutout on the year.

Alpena will host its annual Huron Shores tournament on Saturday beginning at 10 a.m.

The Alpena JV soccer team was also victorious, earning a 3-2 win over Central in what was the team’s first victory over the Trojans in quite some time.