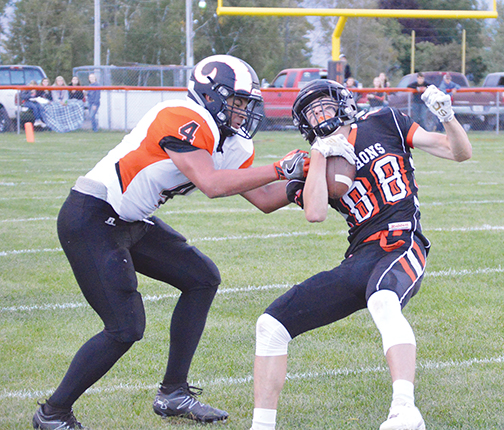 David Harrell had two interceptions, a touchdown reception, a punt return for a touchdown and Harbor Springs simply made too many big plays for the Hurons to answer as they lost to the Rams 33-6 in their home opener at Gilpin Field.

Connor Williams added a kick return for a touchdown and kicker Ethan Schumaker drilled a 37-yard field goal for the Rams, who built a 17-0 lead by halftime and were never seriously challenged by Rogers City (0-3).

After coming up painfully short in the first two weeks of the season–their two losses were by a combined 12 points–the Hurons didn’t get the shot of homecoming momentum they were hoping for.

Rogers City coach Jesse Fenstermaker said after the game that it looked like his team was playing in quicksand. It was an apt description as one mistake led to another and the Hurons struggled to play consistently on either side of the ball as the Rams won battle after battle at the line of scrimmage.

Harbor Springs wasted no time getting on the scoreboard and took the Hurons by surprise when Harrell fielded a punt return and went 65 yards to pay dirt on just the fourth play of the game.

The Rams didn’t score again until midway through the second quarter, but an early 7-0 lead proved easy to hold as the Hurons punted on four of their five first half drives.

A 10-yard touchdown pass from Isaac Hein to J.D. Ellenberger made it 24-6 late in the third quarter, but it proved to be the high point of the contest for Rogers City. For every opportunity the Hurons had, they gave the Rams an equal chance.

That happened twice in the second half. After Ellenberger’s score, the Hurons missed an onside kick attempt and had to re-kick. The Rams capitalized as Williams found a hole and sprinted 81 yards, giving Harbor Springs a 31-6 lead after a PAT from Schumaker.

The second instance came midway through the fourth quarter when Ellenberger intercepted Rams quarterback Grant Richardson. Unfortunately for the Hurons the ball was downed at their own 1 and on the next play the Rams defense swarmed Hein for a safety to take a 33-6 lead.

After an up-and-down first half, the Hurons came out stronger in the third quarter and quickly forced a three-and-out. The Rams adjusted quickly and Harrell picked off Hein three plays later before eventually catching a 13-yard touchdown pass on the Rams next drive.

Harrell finished with three catches for 54 yards and Andrew Truman led Harbor Springs on the ground with 41 yards on 12 carries.

Jeep Damoose had a two-yard touchdown run for the Rams in the first half and Schumaker finished the night with four PATs to go with his field goal.

Rogers City’s seniors, including Ellenberger, spoke up in the postgame huddle and the message was clear: there’s still a lot of season left and the hard work begins again on Monday.

“What you heard over there was them kind of coaching from within,” Fenstermaker said. “It’s what you need. It’s a great group of guys, they just need to connect.”

The Hurons host Mancelona next Friday.