Wildcats swept by No. 9 Cadillac at home 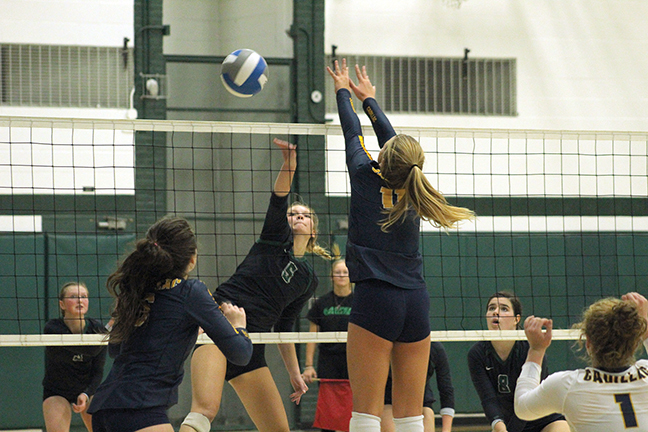 Heading into Wednesday’s Big North Conference matchup, the Alpena volleyball team knew it had a tall task in front of it as they tried to upset Cadillac, the top team in the conference and the ninth-ranked team in the state.

The height and talent of the Vikings was too much for the Wildcats as they were swept on their home floor at Alpena High School, losing by scores of 18-25, 19-25 and 22-25.

Despite being on the wrong end of a conference sweep, Alpena (1-3 BNC) showed some encouraging signs throughout the match, but a few too many mistakes in each game proved costly.

“I was pretty happy that we had some lead exchanges throughout the matches, we were not trailing the entire time on any of the matches. Cadillac is tough, but we should be able to see that we can block and attack against the best teams,” Alpena coach Melissa Doubek said. “Our weakness tonight was our serve reception. It’s not something that we’re not capable of and I’ve seen it in practice so we just have to pull it out on the floor and run our quick offenses. When we had the good pass and ran the quick offense, we got through their blockers and defense. We can do it, we just got to have those passes all of the time.”

For the Wildcats, each game was eerily similar and it wasn’t about how Alpena started, but rather how they finished. The Wildcats opened up with early leads in each game, but failed to put together a big run and was never able to take much momentum away from the Vikings.

After scoring three of the first four points in the opening game, Alpena quickly had momentum taken away as the Vikings responded with four straight and midway through the game, Cadillac went on a 9-2 run to take a comfortable 19-12 lead and finished off the Wildcats in the opening game.

Alpena opened with four of the first five points in the second game, but again the Vikings answered with five straight points to take the lead. Once again, midway through the game, Cadillac broke the score open, going on a 9-3 run to grab an 18-15 lead.

The Vikings scored five out of the next seven points to extend the lead to 23-17 and finish off Alpena in the second game and take a commanding lead in the match.

“We had some hitting errors that were just wide of the court and I’m fine with those errors because we’re trying to go for the lines. Our kids dropped their heads a little bit on those, but I’m trying to pump them out and tell them to keep pushing those lines and help them understand that those balls are going to go out sometimes,” Doubek said. “It’s the miscommunication errors that we can’t have that hurt us tonight, so we have to keep working on that.”

As with the first two games, Alpena jumped out to an early lead in the final game, scoring three of the first four points. Again, Alpena was unable to sustain momentum as the Vikings scored four of the next five to take the lead.

The Wildcats battled in the third game and held a 12-9 lead, but once again failed to put pressure on Cadillac as the visitors used a 7-2 run to take a 16-14 lead and added four out of the next six points to take a 20-16 lead.

Alpena cut the lead to 24-22 late, but it was as close as the Wildcats could get as Cadillac closed the door on a three-game sweep to remain atop the conference.

“We keep improving a little bit every day. Playing a team like Cadillac early in the season and getting the offensive attacks and blocks that we had against a good team like them tonight, showed me that we have a lot of bright spots and I’m happy about that,” Doubek said.

The Wildcats were led by Edie Zann who finished the match with nine kills, five blocks and one assist.Macy Dickinson dished out 24 assists and had eight digs. Meghan Roznowski added 11 digs and a pair of aces and Kate Skiba chipped in with six digs and three aces.