Alpena wins a close one 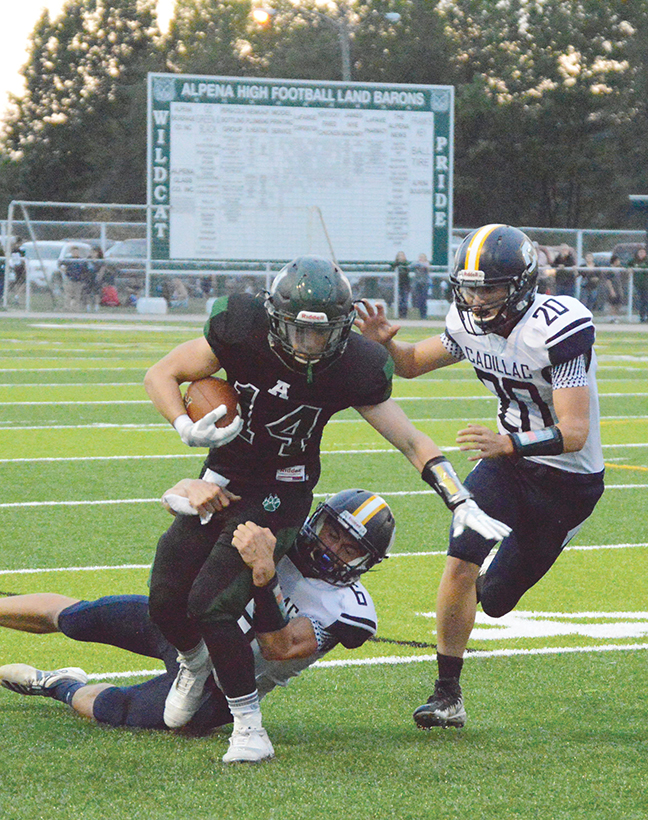 News Photo by James Andersen Alpena running back Charlie Williams (14) is stopped by Cadillac defenders Logan Wilde (6) and Noah Cochrane during the first half of a football game on Friday at Park Family Field at Wildcat Stadium.

Eli Winter ran for three touchdowns and the Wildcats held off a spirited rally by Cadillac to defeat the Vikings 41-38 at Park Family Field at Wildcat Stadium on Friday.

Kelley Stark had a touchdown reception, Charlie Williams recovered a fumble for a touchdown and Jordan Schultz added a rushing score for the Wildcats (2-2, 2-0 Big North), who are 2-0 in Big North play for the first time since 2015.

The Wildcats are currently the only BNC team with a 2-0 conference record.

In recent years, the Alpena-Cadillac game has been close with two of the last three meetings decided by a point. Friday’s contest was another close one as Cadillac cut a 21-point deficit down to three with a little more than five minutes to play.

The Vikings ultimately outscored Alpena 18-7 in the second half.

“Give Cadillac credit. They played a hell of a game tonight. At no point did I think they were out of it,” Alpena coach Eric Mitchell said. “At halftime, we said it’s a 0-0 game and we knew we had to come out, take care of the football and do the little things right. We (lost) the second half, but we’re trying to game plan and make sure that we don’t leave too much time on the clock.”

A 24-yard touchdown catch by Alec Barczewski made it 41-38 with 5:04 left and capped a methodical drive by the Vikings where they softened up Alpena’s defense with 11 straight run plays before beating it over the middle with a pass.

The Wildcats kept the ball out of Cadillac hands the rest of the way however and Winter converted a pair of third downs to keep the clock moving.

He finished the night with 192 yards on 31 carries and three scores. For the game, Alpena finished with 427 yards of offense, including 288 rushing yards.

“Eli obviously is one of our biggest workhorses. Eli definitely gets some hard-earned yards,” Mitchell said. “Jordan, it wasn’t his night on offense (because) they took (halfback) trap away, they took (halfback) counter away and kudos to Cadillac for doing that; but they left (halfback) toss pretty much wide open all night and we got 6, 8, 12 (yards) when we needed it.”

Alpena led 34-20 at halftime after a fast start and upped its lead to 21 early in the third quarter when Ryan Voltz found Stark for a 65-yard touchdown down the left sideline.

The Wildcats held Cadillac in check until Tipp Baker took over the third quarter.

The Vikings may have had a shot to win at the end, but finished the game with two missed extra points and two missed conversion attempts, leaving at least six points on the field.

Going into Friday’s game, Mitchell called the game a must-win and the Alpena’s play in the first half indicated just how importantly the Wildcats took the game.

Winter scored on runs of five and six yards on Alpena’s first two drives. Alpena came up big defensively too when Williams recovered a fumble on a kickoff and returned it for a score to give the Wildcats a 20-7 lead with 3:50 left in the first quarter.

Schultz added a touchdown run of six yards in the opening seconds of the second quarter and Winter ran in a conversion to put Alpena up 28-14.

Winter found pay dirt again at the end of the second quarter, capping a 14-play drive that lasted more than five minutes with a one-yard touchdown plunge.

Cadillac kept things close for a while, scoring three times in the first half. Attempts by the Vikings to close the gap were stalled by repeated penalties though, often on third down.

Collin Johnston ran for touchdowns of 38, 30 and one yard in the first half for Cadillac and finished the game with 119 yards on eight carries, but Alpena held him in check in the second half as Baker and quarterback Aden Gurden got most of the carries.

Baker finished with 114 yards and two scores on 14 carries. Cadillac finished with 346 yards on the ground, but had just 35 yards passing.

Voltz finished the game 9-of-13 passing for 139 yards and Stark led Alpena’s receivers with three catches for 117 yards.

Alpena will hope to keep the momentum going next Saturday when it plays at Traverse City West.

“We’re happy with where we’re at. We should have at least one more win, but we’re 2-0 in the conference right now,” Mitchell said. “You look at the rest of (the BNC schedule) we’ve got the two Traverse City schools and (Petoskey). We get two of those, we’ve got a chance.”