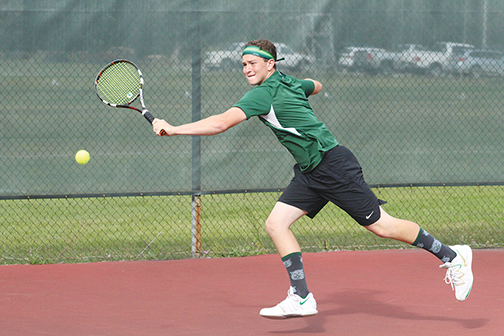 News Photo by Jonny Zawacki Alpena’s Dean Kowalewsky lunges in an attempt to return a volley during a No. 2 singles match against Petoskey’s Ethan Rindfusz on Tuesday at Alpena High School.

Over the years, the Alpena High boys tennis program has always had its hands full against Big North Conference rival Petoskey who is always loaded with talented tennis players.

Thus was the case again on Tuesday as the Wildcats were shut out by the rival Northmen, falling 8-0 on their home courts at Alpena High School.

“Petoskey is always solid. They’re always a good team and well coached. They have a lot of players switching places, so when you have that kind of shift in your lineup you know you’re going to have your back against the wall,” Alpena coach Charlie Giordano said. “They’re always good, but my kids are always out there with their heads held high, trying to get as many points as they can. I just told the kids to just stay at there as long as you can, keep your head up and try to play your game. I just wanted them to go out and do the best they can with what they have and keep their head held high.”

The Wildcats’ No. 1 doubles team of Kevin Cook and Josh Pokorzynski fell to Landen Brantly and Jayson LaGrou 6-1, 6-1. Nick Schultz and Tanner Orban lost at No. 2 doubles to Evan Rindfusz and Nolan Spodefove 6-0, 6-0. Logan Denbleyker and River Servia lost to Jade Cockfield and JP Boroz at No. 3 doubles 6-2, 6-1 and the No. 4 doubles team of Nick Lusardi and Connor Caplis were defeated by Nate Thomas and Jace Copeland 6-1, 6-0.

“It’s good and bad to play a team like Petoskey so early on in the season. We played well in our first matches of the year, but Petoskey is tough, the nice thing is when you play a good school, it shows you where you need to work on things,” Giordano said. “There has been growth each day and everyone is playing a little bit better. When you play better competition it makes you better, but it also makes some of the kids think that they have a big hole in their game. There were a lot of good attitudes today and sometimes that’s hard when you’re playing a good team. There’s a lot of life lessons that you can learn out on the court and when you’re getting drummed, just keep your head held high and put everything you can into what you’re doing and make your opponent stay out there longer than they want to.”