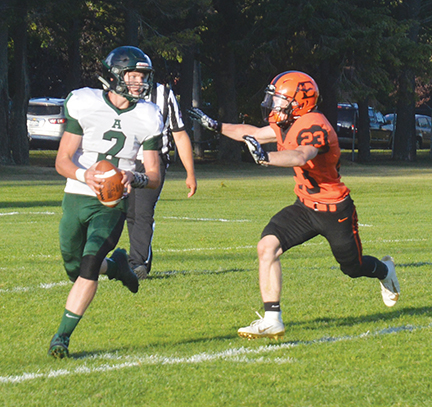 ESCANABA–It’s hard to know what to expect in high school football season openers. Teams haven’t seen their first live game action yet, and nobody really knows what teams are capable of.

The Escanaba football team came out as the more poised squad here Thursday night, jumping out to a 14-0 lead in the first seven minutes and not looking back in a 34-13 win over visiting Alpena.

The Eskymos took advantage of some sloppy play by the Wildcats on Alpena’s first possession of the game. After going three-and-out, a bad snap over punter Hunter Canute’s head gave the Eskymos a first-and-goal on the Wildcats’ five-yard line. Two plays later, Josh Bruntjens found the end zone to give Esky a 7-0 lead.

The Wildcats then continued their sloppy play on their next possession, fumbling on their own 45 to again give Esky great field position. Eskymo quarterback Ethan Silverstone then found Bryant Maki on a 38-yard pass to set up another goal-to-go situation, and two plays later Silverstone found Kyle Krutina on a four-yard screen pass for another score and a 14-0 lead.

“Obviously, it’s tough,” first-year Wildcats’ coach Eric Mitchell said. “We were talking about it as coaches at halftime, it’s the little things. You can’t have a bad snap (on the punt), there’s no chance about it. We struggled the next series and the next thing you know it’s 14-0.”

The Wildcats were able to bounce back late in the first half, finding a groove in the running game with the 1-2 punch of Eli Winter and Jordan Schultz. They had a drive stall at the one-yard line when Schultz appeared to score a touchdown with just under five minutes left until halftime, but it was called back due to illegal formation, setting up a fourth down from the six yard line. Quarterback Ryan Voltz threw toward Kelley Stark in the back of the end zone but the pass was broken up.

The Wildcats did force a three-and-out and were able to get the ball back, scoring on their next drive on a five-yard touchdown run by Schultz with 1:50 left until halftime to cut the deficit to 14-6.

But the Eskymos got the ball back and went into their two-minute drill, scoring with 17 ticks left on a one-yard touchdown toss from Silverstone to Maki to take a 20-6 lead into the locker room.

“They got behind us on defense,” Mitchell said. “I honestly don’t know how it happened because we’ve run this 1,000 times. It’s a two-minute drill. We knew they were going to throw the ball, and they still got behind us.”

Esky then scored again on a 16-yard pass from Silverstone to Dayton Miron to open the second half, and the game got away from the Wildcats from there. After Esky scored again in the fourth, the Wildcats added a late touchdown on a seven-yard run from Winter with 2:33 left to make it 34-13.

“Next week we really need to get off to a better start,” Mitchell said. “It’s plain and simple. We can’t have our backs against the wall right out of the gate.”

Schultz led the Wildcats with 150 yards rushing on 19 carries and one touchdown. Similarly, Winter ran 21 times for 147 yards and a score. Voltz finished 6-for-14 passing for 26 yards and also ran five times for 14 yards.

The Wildcats host Sault Ste. Marie in their home opener next Friday while the Eskymos visit Petoskey.