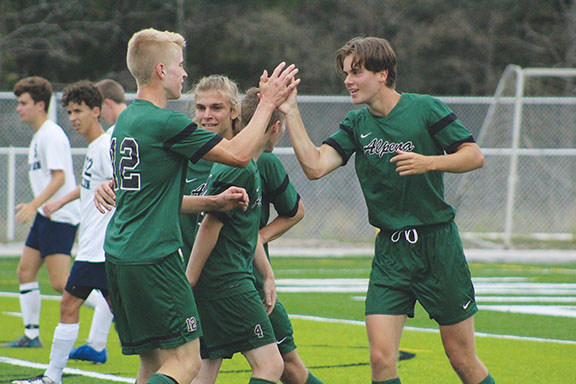 Park Family Field at Wildcat Stadium hosted an athletic event for the first time on Monday and the home team came away the victor.

The history-making night was special as the Alpena boys soccer team earned a 1-0 win over Bay City John Glenn in the inaugural game played on the new artificial turf field.

“I told the guys that it was important to get a win today. Part of it is history because these kids are going to remember this forever and down the record book, people who wonder what happened in the first ever game at Park Family Field, it’s going to be a Wildcat victory and we hope there’s a lot more of those in every sport,” Alpena coach Tim Storch said. “It’s a good way to inaugurate the field and want to do something in a memorable way and I told the guys before kickoff that I wanted them to have pride in this field, pride in this facility, pride in this school and pride in this community.”

The game was dominated by the Wildcats (2-0-1) from start to finish and even though Alpena was victorious, Storch and his team would have liked to have found the back of the net a few more times after outshooting John Glenn 17-0 in the contest.

The lone goal and difference in the game came with 15:48 left to play in the first half when Caleb Zaborney chased a ball down in the corner and dished a perfect pass out in front of the net to Ivo Arvidsson-Ullberg who sent a shot on goal that deflected off a John Glenn defender and went into the back of the net. 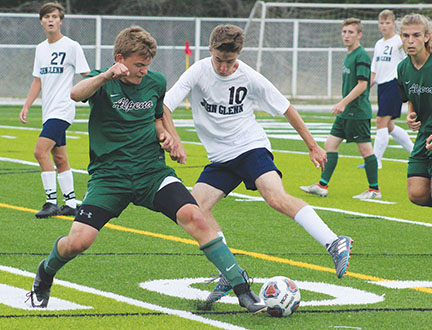 News Photo by Jonny Zawacki Alpena’s Jack Hamp (5) battles with a John Glenn defender for a loose ball during a boys soccer game. Alpena won by a final score of 1-0.

“When you outshoot a team 17-0 and you only win 1-0 it pretty much says you’re final execution wasn’t what it should be. Part of that is it’s the first time seeing turf and obviously it’s different, but Ivo is dangerous. He scored a goal and had more chances throughout the game, but we need to find somebody else that’s going to be a weapon with him up top and just be more control oriented in the midfield,” Storch said. “Again our execution has got to be better and I think over time it will be. Usually that’s something that takes some time and chemistry to fine tune, but certainly when you see 17 shots, you expect to see more than one goal.”

The Wildcats had plenty of chances throughout the game and Arvidsson-Ullberg nearly netted his second goal of the contest with 17 minutes to go in the game when he sent a shot at the net that went off the cross bar.

Alpena had other chances throughout, but just couldn’t seem to get the shot they were looking for off and the ones they did get missed the net.

John Glenn’s best opportunity of the night came with 11:30 left to play, but a shot sailed well over the Alpena net and the Wildcats were able to hang on for the shutout victory despite missing a few key players in Grant Botha and Mike Clark.

“It was difficult because we didn’t have Grant (Botha) and Mike (Clark), two guys that play a lot of minutes for us and we brought two freshman up from the JV team who haven’t taken any reps with the varsity so there was a lot lacking with the chemistry,” Storch said. “You’re never hoping to mix and match as much as we did tonight, but that’s kind of what we had to do. We missed a few key role players and we were just a little off because of that. I’m happy we got the win and I’m just excited and kudos to everyone in the community, especially to the Park family, because this is a special moment not only for Alpena soccer, but Alpena athletics and for the entire community.”

News Photo by Jonny Zawacki Alpena’s Jack Hamp (5) battles with a John Glenn defender for a loose ball during a boys soccer game. Alpena won by a final score of 1-0.