Brooke Ciarkowski signs on to play softball at ACC 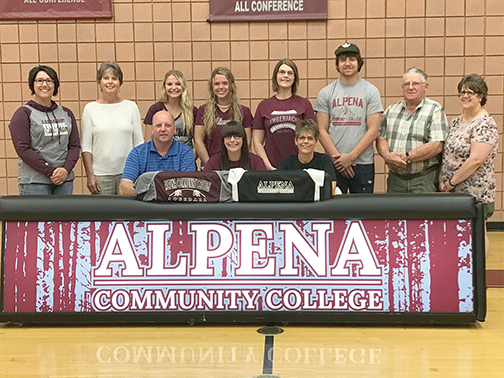 News Photo by Jonny Zawacki Brooke Ciarkowski (front, middle) is joined by family, friends and coaches as she signs her National Letter of Intent on Monday to continue playing softball at Alpena Community College.

Alpena Community College softball coach Christin Sobeck has been busy in her first full offseason since being named head coach.

Sobeck has brought in plenty of talent so far this summer with the hopes of those talented athletes helping the Lumberjacks turn the program around on the softball diamond.

Sobeck was able to bring in another talented recruit on Monday as former Posen Viking, Brooke Ciarkowski signed her National Letter of Intent to continue he academic and athletic career at ACC.

“This day means everything. It’s special to be able to get the opportunity to continue playing softball and being around home, it’s going to be great,” Ciarkowski said. “To get this opportunity is amazing not just for me, but to be able to have my family come and continue watching me play. It’s really an indescribable feeling.”

Ciarkowski was a three-sport standout during her five years on Posen’s varsity volleyball, basketball and softball teams.

The past two years, Ciarkowski was named Posen’s Female Athlete of the Year during her junior and senior seasons.

“Brooke has been a standout at Posen for (five) years and she brings a lot to our team on the softball field. Brooke is an excellent catcher and also has the ability to play third base. At the plate, Brooke can hit for power, she can lay down a bunt, she’s very versatile in her play and the greatest attribute that Brooke has is that she is tenacious,” Sobeck said. “She is a gamer, she is going to show up and she’s going to play ball which is nice.”

This past season, Ciarkowski put together another stellar season as she earned Division 4 all-state honorable mention recognition as a catcher, along with receiving first team all-region and first team all-North Star League-Little Dipper recognition.

Ciarkowski batted .636 on the season and hit two home runs, had 10 doubles, four triples and 32 RBI and was the focal point of the Vikings’ offense and as steady as they come defensively behind the plate.

“I’ve known Christin for a long time and assistant ACC coach Mary Ellen (Wozniak) is from my hometown and coming here is just the best decision for me,” Ciarkowski said. “I think the coaching here at ACC is amazing and I want to be apart of the change in the softball program and I really think it’s going to start to change this coming season. My goals are always to win, but I want to become a better player and there are going to be adjustments that I have to make, but I’m ready to do whatever I can to help this team win.”

Ciarkowski’s experience behind the plate will go a long way in helping some of the pitchers that Sobeck has brought in as well.

Ciarkowski will make for perfect battery with whoever Sobeck decides to put in the circle and Ciarkowski’s ability behind the plate will be a huge addition for the Lumberjacks.

“The last few years Brooke has really worked on defensively framing the ball and when you have a good catcher, it can make your pitcher look that much better. Brooke is going to be instrumental in us having a solid defense, especially behind the plate,” Sobeck said. “Along with her skills, she is also going to be a great teammate and leader for the team. She shows up, tries her best and picks up the people around her which is what’s most important for a team. The idea is to have great student-athletes in the classroom and to bring that success onto the field and I think Brooke is instrumental in us having success this year.”

Ciarkowski grew up playing softball and in different travel leagues and is excited to continue her softball career so close to home and Ciarkowski is looking forward to the challenge of helping the ACC softball program turn the corner as a program.

“I want to thank my parents for supporting me in all of my sports throughout the years, they have been through everything with me, Ciarkowski said. “I also want to thank my friends because I wouldn’t have been able to do any of this without them and they are a big reason why I am here today.”