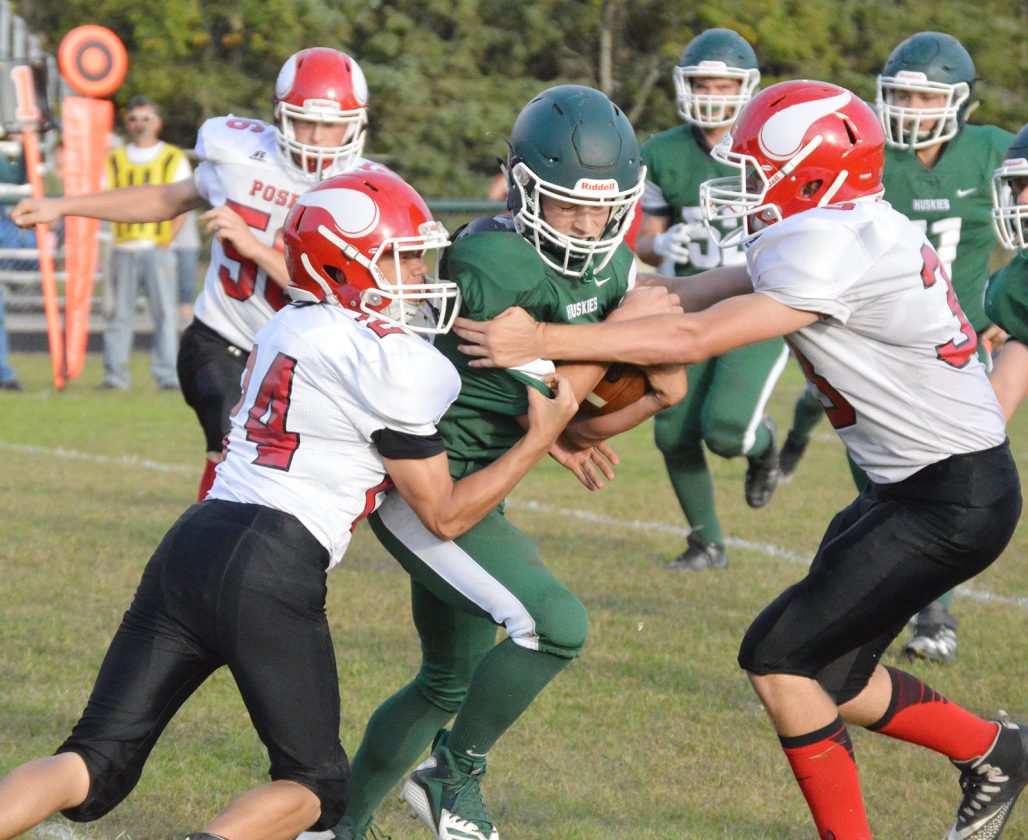 Atlanta quarterback Aaron Cuzzort gets tackled by a pair of Posen High School defenders during an eight-man football game played this past season.

For local high schools, the health and safety of athletes is a top priority.

But when injuries happen, do those athletes get the care they need?

For Alpena High School, the answer is obvious. An on-site athletic trainer is there to provide care for athletes immediately.

But, for Northeast Michigan’s more rural high schools, such as Hillman, Alcona and Posen, the answer isn’t quite as easy.

Financial constraints don’t allow for those schools to have their own athletic trainers, so they must rely on coaches training and local emergency medical professionals to do a little bit of everything to care for athletes in need.

“The reason there are no athletic trainers in these smaller schools is really because of budget reasons,” Hillman Athletic Director and basketball coach Eric Muszynski said. “Obviously, it’s vital and very important, but I think one thing that is unique is that we all, as coaches, have to learn how to tape ankles, assess different injuries, and do our best to take care of our athletes.”

Alpena is the only school around Northeast Michigan that regularly has an athletic trainer on hand. Alpena High’s trainer is employed by MidMichigan Medical Center-Alpena.

It also can save schools money by lowering insurance rates and save parents money by avoiding unnecessary trips to the hospital, he said.

Alpena Community College athletic trainer Maria Lindahl has been with the college for 16 years and is hired by the school through a longstanding contract with Thunder Bay Therapy.

Much like emergency medical crews, Lindahl can help stabilize an athlete in the case of a catastrophic injury and can activate an emergency action plan, which could include a 911 call.

One of the most crucial parts of the job is being able to analyze situations quickly to make sure an athlete gets proper care. During games, that includes determining whether or not an injured athlete can return to a game. It also includes reaching out to local doctors for advice if an athlete has more serious injuries.

“An athletic trainer has gone to school for and has taken all the credits for and has the credentials for injury assessment and how to assess an injury, look at it, how to triage it, and get the appropriate care for that athlete on-site,” Lindahl said. “If you look at any pro sporting event on TV, the first person to look at the athlete is the athletic trainer.”

Lindahl is contracted to work a certain number of hours per week for the sports that ACC offers and said most of the injuries she deals with usually come during preseason conditioning, as athletes are getting back into the routines of their respective sports. A lot of the injuries she sees in-season are fluky in nature: an athlete who takes a hard fall or happens to land wrong after a jump.

‘THE NATURE OF THE BEAST’

Smaller schools around the state and area are not financially able to have an athletic trainer on staff.

Instead, athletic directors, coaches and administrators are responsible for athlete care, though other medical professionals may be on-hand during sporting events.

“Injuries are just the nature of the beast,” Posen Athletic Director and softball coach Wayne Karsten said. “A lot of it falls on the coaches.”

As important as having an athletic trainer on-staff would be, for smaller schools it’s just not possible to have a luxury like that, because they simply lack the money.

Another reason why many smaller schools do not have athletic trainers on-staff is because most of the schools are located several miles away from the nearest medical center, where the trainers are typically employed. Trainers would be forced to travel longer distances and work longer hours based on the location of the schools.

For Northeast Michigan’s more rural schools, first responders, emergency medical technicians, and paramedics are called into action in the absence of athletic trainers.

Those personnel are essentially jacks-of-all-trades, who can do everything from taking care of minor cuts and scrapes to helping to stabilize athletes who have suffered more serious injuries.

Alcona County paramedic Greg Burns said one of the biggest challenges he faces on the job is convincing athletes to receive treatment. In the heat of competition, an athlete may want to stay in the game or support teammates instead of receiving needed treatment.

“Our athletes are so dedicated that (sometimes) the kids don’t want to go to the hospital,” he said.

Burns said events where there are chances for more serious injury — such as football games and Motocross events — necessitate having more than one ambulance on-site.

On-site ambulance service varies in states like Michigan. Cost, the location of the school, and the size of a school all can be factors.

The Michigan High School Athletic Association advises schools to secure an ambulance service for sporting events, if possible, but some sort of medical personnel is required on-site for football games.

In 2017, House Bill 4269 was introduced in the Michigan Legislature and would have required schools to have an ambulance and emergency medical services at athletic events like football and other high-contact sports. The bill was introduced in February 2017 and went no further.

Through their training, local emergency medical crews can help athletes manage pain levels, start IV drips, stabilize the head and neck in the event of serious injuries, wrap up sprained ankles, splint fractured bones, give fluids to stay hydrated, and make them comfortable if they need to be transported to the hospital.

Athletes are required to sign a form giving permission to receive medical care from athletic trainers and paramedics, but Burns said an athlete’s parents always make the final say and medical teams urge parents to seek care for their athletes, especially when there’s a high injury risk.

“Each case is different, so it’s on us” to do an assessment of the athlete on-site, Burns said.

In recent years, those assessments have become even more important, with more information coming to light about injuries like concussions.

Beginning with the 2015-16 school year, the MHSAA required its member schools — all Northeast Michigan high schools are members — to report, by sport, possible concussions sustained by their respective athletes during both practice and games.

Member schools submit their data to the MHSAA, which then compiles findings by sport and releases those findings each fall ahead of the next school year. District-by-district data was not available.

Contact sports such as football (both 11-player and 8-player) and ice hockey saw the most head injuries, with a combined 83 per 1,000 participants for both types of football.

The 2017-18 school year saw a further reduction, with 3,580 concussions among more than 284,000 athletes as schools have taken steps to make their athletes safer, especially in high contact sports.

LONG RIDE TO THE HOSPITAL

That means the care they get on the field or on the court is crucial.

New coaches must go through a specific course offered through the MHSAA on how to handle injuries.

All coaches are informed at yearly meetings about the importance of keeping athletes safe from the heat and concussions. All varsity head coaches need CPR training every two years.

The coaches understand how to handle most of the injuries they might encounter throughout the school year.

“The first aid stuff, coaches are trained and can handle,” Karsten, of Posen, said, “but the serious stuff, we keep our hands off and let the professionals take over.”

In the case of a major injury, 911 is immediately called and most of the schools around the area are close to a local hospital. But, for teams who are on the road, it’s likely an injured athlete would be sent to the nearest medical center that is on the way.

It’s crucial for schools and coaches to have medical release forms from the athletes, officials said. Without one, the athlete is not allowed to leave with a medical staffer or parents and must travel with the team.

“We really like the parents to use the MHSAA form, because other forms that can be picked up at different clinics don’t have all of the medical releases on the form,” Karsten said. “If there is no form, the medical staff can’t do anything.”

The criteria that many of the smaller schools follow when an injury occurs is similar.

“The biggest thing is to always look out for the best interest of the athletes and making sure the athletes are being treated properly and taken care of,” Hillman football and track coach Cody Allen said. “That is our number-one goal when it comes to us coaching and dealing with injuries.”