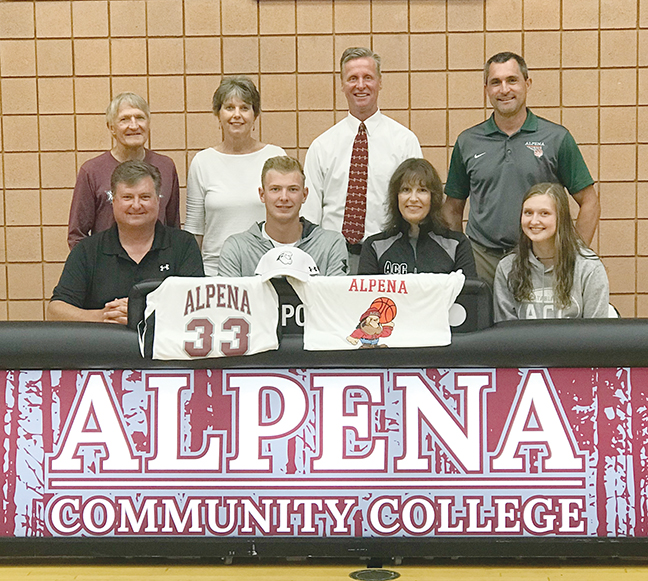 News Photo by Jonny Zawacki Chris DeRocher (front, middle) was joined by family, friends and coaches on Monday as he signed his National Letter of Intent to continue his basketball career at Alpena Community College. After setting Alpena High School’s all-time scoring record during his senior season, DeRocher will stay at home and continue wearing ‘Alpena’ on his jersey.

Alpena Community College head coach Mark Jacobs heavily recruited DeRocher and waited in anticipation to see if and where DeRocher would play basketball.

His efforts were rewarded on Monday as DeRocher made the decision to stay home and continue wearing Alpena on his jersey. He signed his National Letter of Intent to continue his academic and athletic career at ACC and become one of the biggest signings in Lumberjack basketball history.

“It’s very exciting and I’m very excited to continue my basketball career here and play for Mr. Jacobs. He is a great guy and a great coach,” DeRocher said. “Coach Jacobs has been in contact with me for a long time about the possibility of playing here at ACC and how much he wanted to coach me and at the end of the day, I sat down, thought about it and just decided that I wanted to continue playing basketball and I think this is the best option for me. It’s right here at home, ACC has everything that I’ve grown up with, everything I’ve known and all my family is here. Everything is just a perfect fit.” 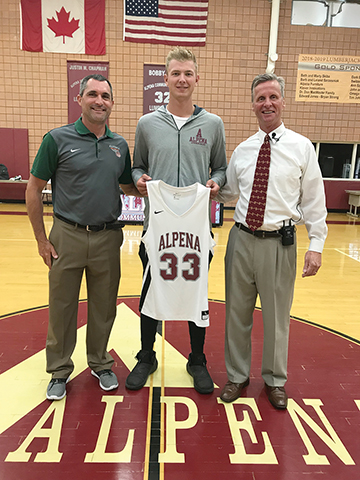 It’s no secret what kind of player the Lumberjacks are getting.

DeRocher’s statistics and records speak volumes, but the raw talent that DeRocher possesses along with his length and ability to play anywhere on the court is going to provide an instant impact for an ACC program that has struggled in recent years.

The Lumberjacks are searching for success and with Jacobs now in his third season, he believes he hit the jackpot with this signing and believes DeRocher can help take his team to the next level.

“We’re trying to build a program and Chris is the perfect piece to the puzzle. He is an athletic wing, but he does all of the right things. He’s a great student, a great young man and fits exactly what I’m looking for in a player. I would have to say this is one of the biggest signings in school history,” Jacobs said. “The cool thing is, he stayed home. I’m happy for his family, I’m happy for this program, I’m happy for the college, but I’m really happy for the community because this just goes to show that a young man who is a great athlete can stay home and get a fantastic start to their education and he’s doing that. He’s going to set the precedent and it’s just a huge signing for us.”

There were some growing pains early as is the case with most young athletes, but Pintar allowed DeRocher to play his game and develop into an elite basketball player.

“I have been holding my breath. I was not giving up number 33 and I promised Chris that. I talked to him several times and even if he wouldn’t have come, I wasn’t giving up number 33 because I was just hoping there was going to be a chance that he came here. It meant a lot when I got the phone call and it just takes our program to the next level,” Jacobs said. “I knew that with Chris’ talents, it was a shot in the dark to get him, but I knew he was one of the kids that wanted to stay home. Just with his ability and size, Chris is going to get recruited hard after his time at ACC. This is a huge win for us and I’m not taking anything away from any of my other athletes, but this is the second most important signing of my life, my first being my marriage license and that’s how highly I think of Chris and how important this is and how special this opportunity will be to coach a young man like Chris DeRocher.”

DeRocher went on to score 1,624 points over four years at Alpena and broke Alpena’s all-time scoring record earlier this year, breaking a record that stood since 1972.

DeRocher was hands down the best basketball player in the area the past two years and averaged 22.9 points and 9.6 rebounds during his senior season as he helped lead the Wildcats to a 16-5 record.

“I’m really excited for Chris to have this opportunity. He’s been a great player to coach and it was fun to watch his development and even better to realize I’ll be able to watch him at the next level in our backyard. He has a high ceiling and he’s only going to get better,” Pintar said. “The great thing about Chris was that he was always motivated to be successful individually, but more importantly he wanted to see his team win. I’m sure he would agree that all of the records that came his way at the end were great, but what was most important to him was seeing his team succeed during his senior season. He took some lumps early in his high school career and his records were a byproduct of how hard he worked, but he wanted to see the team win and I’m sure he had a lot more fun with the winning part and hopefully he’ll be able to bring that here and he knows what it takes to build up and win and whatever individual accolades that may come his way will be great too.”

DeRocher has developed into an elite level player and his transition to the collegiate level should be no problem for a player who is focused on continuing to get better as a player and making his team around him better while helping ACC turn the corner as a basketball program.

“I’m just going to try and play my best basketball for the school and help my team win. It’s going to be a lot different from playing high school, I’m going to have to work a lot harder, get a lot stronger and there is going to be a lot of bigger, faster, stronger people than I’m used to playing against,” DeRocher said. “My goals are to get this school back to the good days of basketball at ACC and win games. I just want to be able to do a lot of good things for this school. I want to thank my family, coach Pintar, all of the coaches I’ve had and everyone that has helped me get to where I’m at and it’s been an amazing ride and they are the reason that I am here.”

News Photo by Jonny Zawacki Chris DeRocher (front, middle) was joined by family, friends and coaches on Monday as he signed his National Letter of Intent to continue his basketball career at Alpena Community College. After setting Alpena High School’s all-time scoring record during his senior season, DeRocher will stay at home and continue wearing ‘Alpena’ on his jersey.