Time to step it up 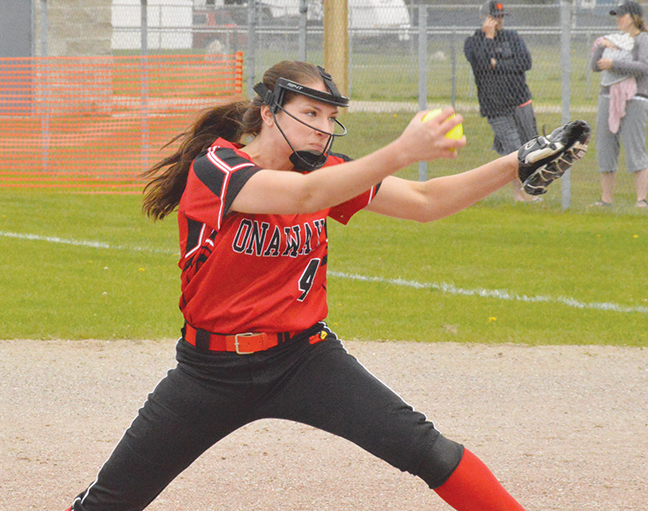 Onaway senior pitcher Calley Selke fires a pitch in a game against Indian River Inland Lakes in Tower. Selke and the Cardinals will play in a Division 4 regional today in East Jordan and are seeking their first regional title since 2010.

As exciting as district play was last week, the competition will intensify during the regional tournament on Saturday.

Of the three local softball teams that remain in the playoffs, two–Alpena and Rogers City– are ready to defend regional championships.

The other–Onaway–is looking to win its first regional title in nearly a decade.

Alpena will travel to Saginaw Valley State University and do battle with Grand Blanc at noon in a rematch of an early-season matchup in Alpena.

The two teams played a tightly contested game, but the Bobcats came away with a 2-0 victory. 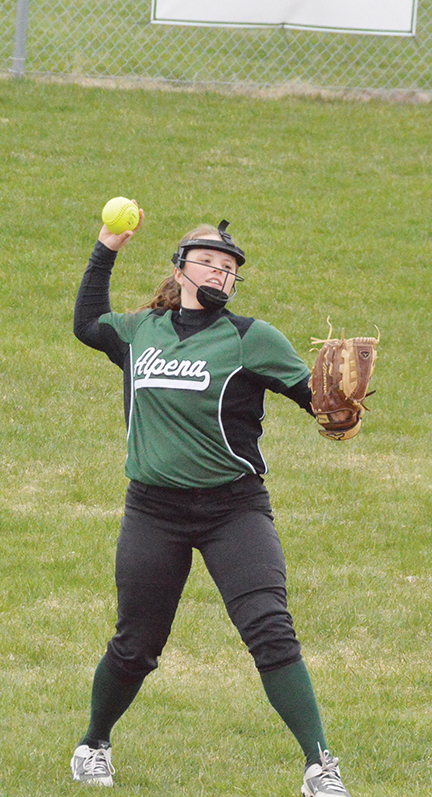 Alpena sophomore shortstop Corine Donajkowski throws the ball after making an out during a game at Alpena High School. Donajkowski and the Wildcats will play in a Division 1 regional today at Saginaw Valley State University and are hoping to defend their regional championship.

Grand Blanc pitcher Kendall Klochak was the difference in the first meeting between the two schools and figures to make an impact on Saturday.

Klochak shut out a potent Alpena offense and drove in the only two runs of the game.

It’s likely that Alpena will face Klochak again in the regional semifinal, but the Wildcats may give Grand Blanc a different look and could decide to go with junior Jade Schultz in the circle.

Emma Fraser pitched in the first meeting between the two teams and did her part, but ran into some trouble in the late innings of the game.

Schultz has been nursing an injury much of the season and hasn’t seen her usual workload in the circle. Schultz did pitch in last weekend’s district tournament however and looks ready to go for Saturday.

The Wildcats know the feeling of playing close games. Their schedule has tested them all season and Alpena defeated TC Central in a high-scoring game to capture its second straight district championship last week.

The Wildcats are hoping their bats stay hot on Saturday.

Not only have Schultz and Fraser shared much of the pitching load, but the duo has supplied plenty of offense atop the Alpena batting order.

Both Schultz and Fraser each hit a pair of homers last weekend and their work along with both Allie and Abbie Funk should provide the Wildcats with plenty of scoring opportunities.

“We know Grand Blanc is a good team. We seen them earlier in the season so we are familiar with them and know they have a good chucker,” Alpena head coach Paul Marwede said. “Our first meeting was a close game and both teams are talented. I think this has all the makings of being a very good ball game.”

The Wildcats are in search of their second consecutive regional title and if they are victorious in Saturday’s semifinal game, Alpena would meet the winner of Bay City Western and Swartz Creek in the regional championship game at 2 p.m.

After winning its eighth consecutive district championship, Rogers City is back in familiar territory trying to defend another title.

If Saturday’s games are anything like district play, the Hurons will be in for another tough day as they try to defend their regional championship. They open play against St. Ignace as noon.

The Hurons survived last weekend, winning a one-run game and triumphing in extra innings to claim the district championship and get to Saturday’s regional semifinal.

“We’re excited. We’re going to try and win our fourth straight regional championship and represent Rogers City the best we can. We don’t know a lot about St. Ignace, but we know they’re here for a reason and we need to just come ready to play,” Rogers City coach Karl Grambau said. “Each game gets tougher and tougher. I think last weekend there were a lot of nerves for some of our younger players, but now they have experienced what it’s like and playing those close games last weekend and playing a tough schedule all season long has us prepared. Our veteran players know what to expect and we are confident coming in.”

The Hurons will continue to rely on the arm of Kyrsten Altman who twirled a gem in Rogers City’s 1-0 victory over Johannesburg-Lewiston in the district semifinal game.

Offensively, the bats of Altman, Taylor Fleming, Catheryn Hart, Amanda Wirgau and Jeffra Dittmar will need to start how they finished last game by scoring seven runs in the ninth inning in a victory over Hillman.

There is a possibility for an all-Presque Isle County showdown for a regional championship if Onaway defeats East Jordan at 10 a.m.

The Cardinals won their first district since 2011 last week when they earned a thrilling win over Indian River Inland Lakes.

Now Onaway is in search of their first regional championship since 2010 and the Cardinals have a great mixture of young and veteran talent to do it.

Senior Calley Selke will likely see the circle and do her best to provide the Cardinals with strong pitching and timely offense. Selke hit a key home run in Onaway’s victory over Inland Lakes and along with Selke, veteran players like Kennedy Crawford and Kayla Metty and younger stars in Kyli Brewbaker and Taylor Larson give Onaway a strong chance of ending its near decade-long regional championship drought.

If both Rogers City and Onaway are victorious in their semifinal games, the two rivals will play at 2 p.m. for a regional championship in what will likely be an electric atmosphere.

Despite the respect both schools have for each other, both the Cardinals and Hurons want to win a regional trophy.

“It is very possible we could potentially have a Presque Isle matchup for the regional championship. It’s a good rivalry and even though we haven’t played them this year, we’ve seen them and are familiar with them,” Grambau said. “The girls from both schools play with and against each other in travel ball during the summer so they all know what to expect because they know each other. If it comes down Rogers City against Onaway for a regional title, it’s going to be a real good matchup.”

Onaway senior pitcher Calley Selke fires a pitch in a game against Indian River Inland Lakes in Tower. Selke and the Cardinals will play in a Division 4 regional today in East Jordan and are seeking their first regional title since 2010.

Alpena sophomore shortstop Corine Donajkowski throws the ball after making an out during a game at Alpena High School. Donajkowski and the Wildcats will play in a Division 1 regional today at Saginaw Valley State University and are hoping to defend their regional championship.