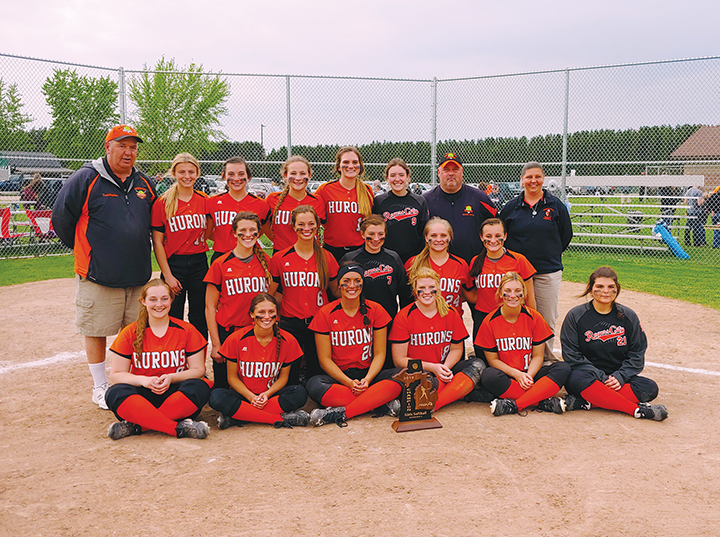 ATLANTA–The Rogers City softball team has made winning district championships look effortless for the last several years, but the Hurons’ latest district triumph proved to be anything but easy.

After a uncharacteristically quiet day at the plate, the Hurons finally woke up in the ninth inning of Saturday’s Division 4 district final, scoring seven runs to top Hillman 9-2 at Atlanta High School.

The win gives Rogers City (24-8) its eighth straight district title and moves the Hurons to a regional semifinal matchup with St. Ignace at noon on Saturday in East Jordan.

Rogers City reached the final after outdueling Johannesburg-Lewiston 1-0 in the district semifinals.

“(I’m) really proud of the girls and we just go on for another day. That’s all you want to do,” Rogers City coach Karl Grambau said. “We just kept battling. (There) were good teams playing all day today.”

Karissa Rabeau scored the winning run for Rogers City on an error in the top of the ninth, opening the floodgates for the Hurons, who scored seven runs on five hits in the inning to finally pull away from Hillman.

Grambau joked after the game that his team had saved him from paying $500 for a stress test.

It was easy to see why after a back-and-forth contest that saw some early scoring, a pitching and defensive duel for seven innings and a few wild plays that nearly ended the game before the ninth.

“We’re really happy to get the win. I just told the girls, I said, ‘Usually you go the hospital for a stress test that costs a lot of money,” Grambau said. “This didn’t cost any money, but it was like a stress test for me.”

Hillman appeared to have a win within its grasp in the bottom of the eighth inning when Brooke Jones led off with a triple. The Hurons caught a huge break however when Jones overran the bag at third and slipped, allowing Rogers City third baseman Catheryn Hart to tag her. The Tigers got two runners on after that, but were held in check.

Rogers City pitcher Kyrsten Altman and the defense retired Hillman in order in the ninth inning to finish off Rogers City’s win.

“Hillman made some great plays and we made some nice plays and that’s what it’s all about,” Grambau said. “All you want is for your kids to go out and play as hard as they can play and both teams really did that, especially on the defensive end.”

Rogers City nearly scored the go-ahead run in the top of the eighth after Hart led off with a triple to right field. A subsequent fly ball to center was too shallow on tag up on and an infield single by Alissa Bowden put runners on the corners with one out.

Hillman caught a break when Kyley LaFleche hit a liner to shortstop that appeared to hit the ground before it was snagged. Nonetheless, it allowed Hillman to pull off a double play and end the Hurons’ turn at the plate.

The Tigers’ defense held firm in the sixth and seventh innings as well. With a runner on third, Hillman induced a ground ball to end the sixth inning. In the seventh inning, the Tigers came up big again when they got a fly ball out to strand Huron runners on the corners.

The matching zeroes for seven innings lay in contrast to the first inning as both teams made contact immediately.

The Hurons scored a pair of runs on a passed ball in the top of the first and Hillman responded with two runs in the bottom of the inning after Alison Samp and Makenna Grulke both had RBI hits.

Over the next seven innings, the two teams scattered eight hits and stranded 13 base runners.

Rabeau got things started for Rogers City in the ninth with a double down the right field line and was bunted to third by Linnea Hentkowski. After Altman walked, an error on a grounder from Taylor Fleming allowed Rabeau to score. Before the end of the half inning, Hart drove in two runs with a single and both LaFleche and Jeffra Dittmar had RBI singles.

Altman earned the win, limiting Hillman to two runs on nine hits with nine strikeouts. Bailey Schook took the loss for Hillman, but limited the Hurons to two runs on four hits through eight innings.

Schook and Samp each had two hits for Hillman.

Amanda Wirgau and Dittmar each had two hits to lead Rogers City.

Altman pitched a gem against Joburg, pitching a three-hit shutout with one walk and 16 strikeouts.

The game-winning run came in the bottom of the fourth inning when LaFleche scored Hart on a sac fly.

Hillman defeated Atlanta 12-1 in the other semifinal.