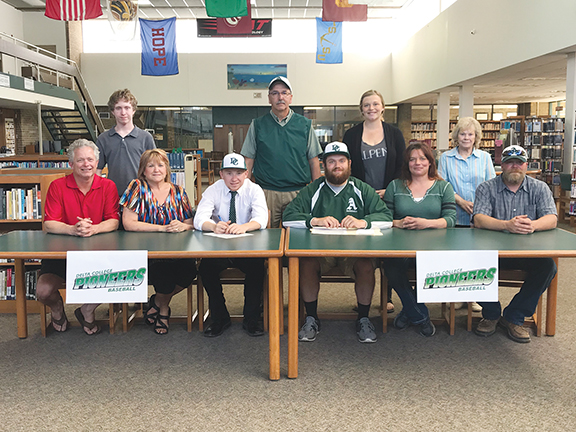 For the past three years, Bruz Copping and Aidan Goike have been staples in the Alpena High baseball program.

Both Copping and Goike made the varsity team as sophomores and started the past three years, playing key roles for the Wildcats during a successful three years on the diamond.

Despite a heartwrenching loss in the district opener just over a week ago, Copping and Goike will get another opportunity to make an impact on the baseball field as the duo signed their Letters of Intent to continue their baseball careers and will continue being teammates as they both signed on to play baseball at Delta Community College.

“It means a lot to be able to continue playing baseball because it’s what I’ve loved to do since I was young. I’ve always wanted to keep playing for as long as I can and it’s just a huge accomplishment to get the opportunity to play at Delta the next few years,” Copping said. “I am going to continue working hard with my ultimate goal after finishing my two years at Delta to transfer to a four year school and keep playing until someone tells me I’m not good enough.”

Copping spent his three years batting in the middle of the Alpena lineup and was a top of the rotation starting pitcher during each of those three seasons.

Copping enjoyed a stellar senior season as he finished with a record of 10-2 on the mound and was just one win shy of tying a longstanding Alpena High record for wins in a single season.

“I had the time of my life the last three years playing varsity baseball for coach (Phil) Schultz and everyone else who was involved,” Copping said. “I just want to thank my coaches, teammates and family. They have always been there for me and are a big reason why I’m getting this opportunity.”

Goike spent the last three years entrenched in the leadoff spot in the batting order and was a true table-setter for the Wildcats.

Not only was Goike’s role vital in getting the Alpena offense going each game from his leadoff position, but Goike manned center field each of his three seasons wearing the Green and White and was as steady as it gets playing the field.

“This day is really special. I’ve always wanted to play sports at a collegiate level and fortunately I got an opportunity to play baseball at Delta and I’m really looking forward to it,” Goike said. “My goals upon going to Delta is just to improve and become a better baseball player and help the team win. I want to thank all of my coaches because they all helped me improve throughout my three years playing varsity baseball at Alpena High.”

Copping and Goike will join a Delta baseball program that has had success on the diamond in recent years.

This past season the Pioneers finished 29-26 and made a NJCAA Super Regional appearance, falling short in game three of the best-of-three series.

The two Wildcats will play for Delta head coach Danny Smith, who has been the Pioneers skipper since 2011. Under Smith, Delta has not had a losing season, has made deep postseason runs and have been one of the most consistent junior college baseball programs in the state over the past decade.

“It’s nice going in to realize that I’m going to know someone on the team. We’ll be able to work out, practice and just be comfortable working with each other so it will definitely make for a nice transition,” Goike said.

Copping will be studying accounting and Goike will look to major in business or marketing.

Copping and Goike bring plenty of experience and a winning attitude to a program that has done its fair share of winning in recent history. Copping and Goike are determined to make an impact at the collegiate level, much like they did during their high school careers.

“It’s always one of your goals when you start as a coach to make these kids successful and help give them the ability to move on to the collegiate level and it’s special to see that these two guys are able to do this,” Alpena coach Phil Schultz said. “I think both of them can be successful. Delta is a good program and they have a lot of success into moving kids onto four year programs. I’m looking forward to seeing these two play for another four years and I wish them nothing but the best.”