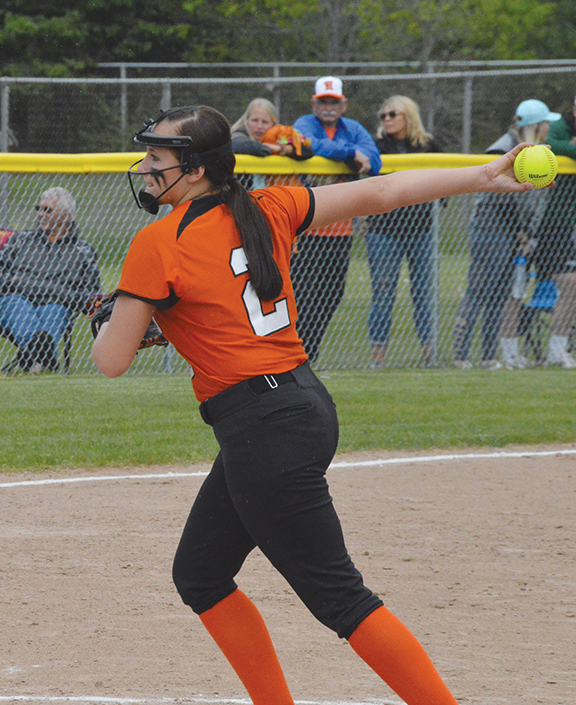 News File Photo Rogers City pitcher Kyrsten Altman delivers a pitch during a district game against Hillman. Altman and the Hurons will play Rudyard in a Division 4 quarterfinal Tuesday at Petoskey.

The Rogers City softball team’s quest to return to East Lansing will follow a familiar path this season.

For the second straight season, the Hurons (26-8) will play Rudyard in a Division 4 quarterfinal on Tuesday at Petoskey High School.

Game time is scheduled for 2 p.m. The winner will meet either Allen Park Inter-City Baptist or Unionville-Sebewaing in the second of two D-4 semifinals on Friday at Michigan State University.

Both teams are accustomed to long playoff runs and Rogers City is hoping for a result similar to last year when it toppled the Bulldogs 7-5.

Tuesday’s game will be the rubber match between the two teams after they split a twinbill in Rogers City late last month. Rudyard won the opener 6-4 in eight innings and Rogers City won the nightcap 3-1.

The Hurons are making their sixth quarterfinal appearance since 2012 after several clutch performances this postseason. Rogers City survived a tougher-than-expected district and then defeated St. Ignace and Onaway last weekend to clinch its fourth consecutive regional title.

“It’s just amazing (to still be playing). I want to get back down to Michigan State and now we’re on the road to do that,” Rogers City junior pitcher Kyrsten Altman said. “It’s amazing, just to know that we can keep going farther and farther and maybe get back to where we were last year and win.”

Another big-time performance from Altman on Tuesday could very well stifle a potent Rudyard offense and send the Hurons back to East Lansing.

In three starts this postseason, Altman has been equally adept at mowing down batters with strikeouts as she has been pitching to contact and letting Rogers City’s defense go to work. Such was the case in Saturday’s regional title win over Onaway where she recorded just two strikeouts, but induced many routine ground balls and fly balls.

“I’m just really doing it for my team,” Altman said. “My (role on the team) is pitching and doing the best I can for them.”

The Bulldogs (22-9) got a taste of late-season success last year when they became the first Eastern U.P. team to reach the quarterfinals.

With that experience under their belts, they’ve been a force in the postseason in 2019 and are hoping to avoid last season’s fate.

Facing off against the Hurons, Rudyard fell behind 7-0 after three innings and was forced to play from behind the rest of the way, coming up just shy in its attempt to rally back.

This year, Rudyard has been dominant in the playoffs and earned its second consecutive regional title with a 6-0 win over Bark River-Harris.

In five postseason games, the Bulldogs have earned three shutouts and outscored their opponents 53-5.

Senior pitcher Emilee Curtis has been strong for the Hurons and fanned 11 while allowing five hits and a walk in the Bulldogs’ regional title win.

One trait both teams have in common is taking advantage of opportunities. While the Bulldogs have experienced players like Curtis, Paige Postma, Cierra Molina and Morgan Bickel who all played against Rogers City last season, several of the the Bulldogs’ younger players like Brooklyn Besteman have come through in big moments.

The game can be said for the Hurons. While the top of Rogers City’s order is where opposing pitchers tend to run into trouble, the bottom of the order has come through in key spots as of late.

Two weeks ago, No. 9 hitter Karissa Rabeau doubled in the top of the ninth inning to kickstart an offensive rally that eventually propelled Rogers City to a district title. Last weekend, No. 8 hitter Brooke Saile hit her first career home run, giving the Hurons a needed spark on the way to beating Onaway for the regional crown.

The final eight teams in Division 4 features six of the teams ranked in the top 10. Along with the third-ranked Hurons, No. 1 Coleman, No. 2 Kalamazoo Christian, No. 5 Ottawa Lake Whiteford, No. 7 Holton and No. 9 Unionville-Sebewaing are all vying for one of four tournament spots at MSU.