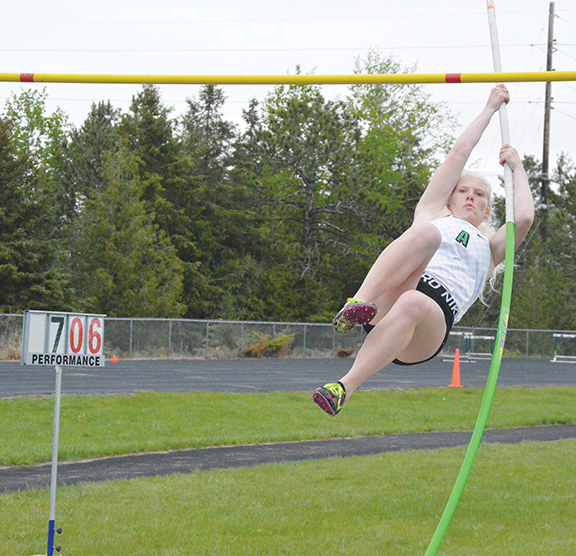 News Photo by James Andersen Alpena junior Karli Myers competes in the pole vault during the Alpena News Honor Roll Invitational on Tuesday. Myers will compete in the same event at the Division 1 state finals this weekend.

Patience and persistence have carried a long way Karli Myers during her high school career.

On Saturday she’s hoping those traits along with her talent will carry her to the awards podium.

Myers will be one of three Alpena pole vaulters competing at the Division 1 state finals at East Kentwood High School on Saturday.

“It is huge for me,” Myers said of competing at the finals. “I have spent a lot of years and a lot of practices working toward this goal for sure.”

For the Alpena junior, her journey to the state finals has been one filled with obstacles. While she’s been a mainstay for Alpena in the pole vault, the last two seasons have been a lesson in perseverance as she’s overcome a string of injuries.

During her freshman year, she spent the first six weeks of the season in a boot with an ankle injury. The next season, she went down for a month with a groin injury.

The injuries robbed Myers of the chance to compete for a full season, but in spite of all that, her talent came through in spades when she did compete.

As a freshman, she vaulted 8 feet, 6 inches, which tied her for the fifth best height in program history. The next season, she vaulted a personal best 9 feet, 9 inches at the end of the year, recording the second best height in program history. In both seasons, she also performed well on a big stage, winning the Big North Conference title in the pole vault.

To date, Myers is only one of just two Alpena female vaulters–along with Kristin Hoesel in 2006– to win a Big North title and the only one to do it in back-to-back seasons.

“That was so exciting because it definitely shows the hard work paying off, working toward getting back to where you were before the injuries,” Myers said of her Big North wins.

Myers finished third at the conference championships this season, but perhaps more importantly, she’s been able to stay healthy and has become more technically proficient as a vaulter.

During her first two seasons, Myers’ talent and strength often proved to be more than enough to win at most meets. This year however, she’s focused on warming up more before she vaults and taking care of her body.

“This season I’ve definitely had the best season (staying injury-free). I’ve been pretty healthy for most of the season and this year has definitely been a growing year for me,” Myers said. “This year I’ve been mostly healthy, (except) for a little shoulder injury at the beginning. But I’ve been able to get 9-3 and I’m hoping to get back to that 9-9 PR.”

The addition of Alpena alum Alec LeTourneau and former British national pole vaulting champion Adam Walker to the coaching staff has helped Myers and fellow state qualifiers Gabe Bullis and Josiah Matuzak become more technically sound. For Myers, that includes developing a turn, angling or spinning the body toward the pole while in the air in order to achieve a better height and to clear the bar without hitting it.

Myers’ season best is 9 feet, 3 inches, but she’s hoping to go even higher this weekend.

“In previous years, I’ve struggled with form and I’ve always just used my strength to pole vault. This year, we’ve really been working on form with our new coach and we’ve actually had two great coaches–Alec (LeTourneau) and Coach Adam (Walker). They’ve really helped me a ton, helped my form and I’ve really been able to improve with my form a lot,” Myers said.

Should she earn all-state honors this weekend, Myers would become only the second Alpena female pole vaulter to do so, following Hoesel, who did it in 2006.

“Opening height is my season PR at the moment, so I’m definitely expecting or hoping to get over the opening height at states,” Myers said. “Anything above that, I’ll take. I’m just really hoping to do my best.”

America, it’s time to grow up!