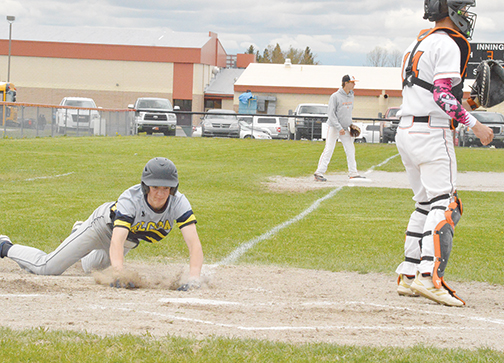 News Photo by James Andersen Alcona’s Jacob Sytek, left, slides into home plate to score during the third inning in the first game of a baseball doubleheader on Thursday in Hillman. Also pictured is Hillman catcher Cam Koenig.

HILLMAN–After watching his team struggle through a doubleheader sweep against Au Gres on Wednesday, Alcona baseball coach Nathan Walker told his players to go back to basics.

The strategy paid off for Alcona, who split a North Star League doubleheader with Hillman on Thursday in Hillman. Alcona won the second game 6-5 in seven innings and Hillman won the opener 5-4 in seven innings.

Jacob Sytek hit a two-run single in the top of the seventh inning of the nightcap to give Alcona (11-14) just enough runs to top Hillman. The game went into international tie-breaker rules in the seventh inning where each team started with a runner on second base in their respective turns at the plate.

As Alcona’s last out in the sixth inning, leadoff hitter Zach Stephenson started on second base and was moved to third on a single from Josh Kilbourn. With two runners on, Sytek delivered with one out, giving Alcona a 6-4 lead.

“It was good day of baseball all the way around. We played some of the best defense we’ve played all year and that was nice to see,” Walker said. “(I told them to) go back to fundamental baseball. We got to together and I said ‘fundamental baseball,’ that’s all we need to worry about.”

Hillman (15-14) cut the lead in half in the bottom of the seventh when Jaden Dove singled in Fisher Linseman. The Tigers had the tying run on first base, but Alcona got the final two outs to preserve the win.

Alcona’s victory backed up a solid pitching performance from Stephenson, who went the distance. Hillman got to Stephenson in the first inning, tagging him for four runs, but Stephenson limited Hillman to just two hits over the next five innings. He allowed five runs on five hits with four strikeouts and two walks.

After winning the first game on a walk-off hit, Hillman caught fire early and led 4-0 after one inning. Kory Henigan had a two-run double and Brady Firman had an RBI groundout.

Hillman’s bats were quiet the rest of the way. The Tigers struck together a pair of singles and loaded the bases with one out in the second inning, but couldn’t convert and left all three runners aboard.

In the field, a few Hillman errors extended Alcona’s turns at the plate and helped put more runners in scoring position.

“The difference in the two games is we didn’t play clean the second game. We need to play clean. The margin for error is really small right now,” Hillman coach Rick Firman said. “We’re capable of doing better. I think we play hard, we just need to play more consistently clean.”

Alcona cut Hillman’s lead in half in the second inning after Pierce Bilbey singled in a run and Mike Basner had a sac fly. The Tigers added two more runs in the third inning as Antavius Mikazes and Bilbey each had an RBI single.

Hillman starter Nic Taratuta held Alcona in check over the next four innings, but ultimately took the loss. He surrendered six runs on 10 hits with six strikeouts and two walks.

Nash Steinke had a pair of hits to lead Hillman. Jon Surgener led Alcona with three hits and Kilbourn and Bilbey each had two.

Cam Koenig was the hero for Hillman in the opener, singled to left field in the bottom of the seventh inning to score Gage Steinke. Koenig hit a hard grounder, which bounced off the foot of Alcona’s shortstop and into the outfield. It provided enough time for Steinke to take third and then advance home for the winning run.

Henigan started for Hillman and set down Alcona batters in order in the top of the seventh, despite Kilbourn starting on second base.

Hillman’s win came after it rallied from a run down three different times. Hillman trailed 4-3 after the top of the fourth inning, but answered back and tied the game for the second time when Linseman scored on a groundout.

Henigan no-hit Alcona through the last three innings and Hillman stranded a runner in both the fifth and sixth innings before breaking through. Henigan earned the win after pitching seven innings. Kilbourn took the loss, allowing four runs on six hits with six strikeouts and three walks.

Alcona got on the board first with an RBI single by Jon Hebert in the second inning. Hillman tied the game when Henigan scored on a passed ball in the bottom of the inning.

Alcona added a run in the third on an RBI groundout from Mikazes. Hillman answered with two runs in the bottom of the third, scoring on a pair of errors to take a 3-2 lead.

A two-run double from Sytek gave Alcona it’s final lead of the game, 4-3, in the top of the fourth inning.

Surgener led Alcona with two hits and Dove was 3-for-3 for Hillman.