Ready for a reset 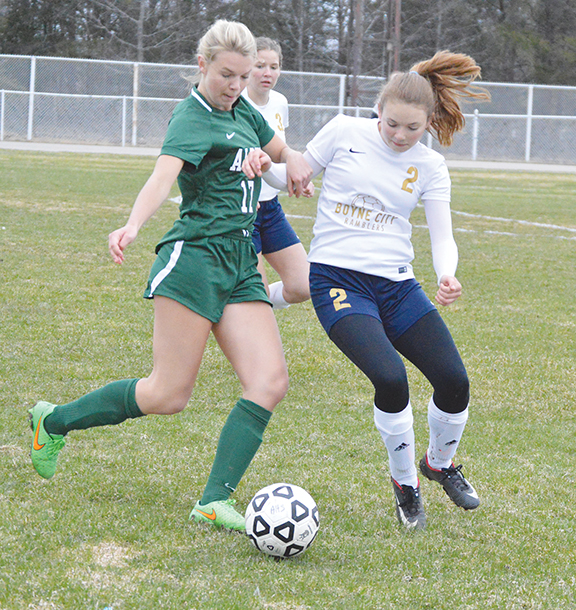 News Photo by James Andersen Alpena’s Sarah Campbell, left, battles Boyne City’s Katie Harmeling for possession of the ball during the first half of a girls soccer game on Tuesday at Wildcat Stadium.

The Alpena High girls soccer team opened its season on a solid note last week with two wins in its first three games.

Despite that start, the Wildcats showed on Tuesday they still have some work to do after a 2-0 loss to Boyne City at Wildcat Stadium.

Inanna Hauger and Jordan Noble each scored for the Rambers, who connected twice in a seven-minute span in the first half to overtake the Wildcats.

Alpena (2-2) struggled to move the ball on offense and too often found itself on the wrong end of things defensively. The Ramblers, who improved to 5-0 with the win, outshot Alpena 12-3 for the game and had a number of chances that seemed to catch Alpena’s defense off guard.

“These guys beat Traverse City Central 4-1, so I know they’d be dangerous up front. But we were not good in the back (defensively),” Alpena coach Tim Storch said.

Storch lamented his team’s lack offensive creativity and predictable attacking and said going forward, the Wildcats will need to improve their fitness level.

“Our lack of fitness showed. They were certainly more fit and beat us to many, many balls,” Storch said. “They’re playing good soccer, that’s why they’re 5-0.”

Boyne City tested Alpena starting keeper Edie Zann about 10 minutes into the game, missing a shot wide left. The Ramblers connected a short time later when Hauger scored with plenty of room to maneuver after an outlet pass.

Boyne City connected again with 23:56 left in the first half when Noble beat Zann with a shot to the lower right corner.

“The two goals we gave up in the first half (weren’t good). The first one, that’s just basic pressure cover, first and second defender and we never had a second defender,” Storch said. “The second one looked like Moses parting the Red Sea.”

Alpena had a chance about 12 minutes into the first half, but couldn’t convert on a chance that saw Boyne City keeper Cora Hauger come out to play a ball on the side of the net, leaving it wide open. The Wildcats registered their first shot on goal when Mollie Girard fired a shot at Cora Hauger wide of the net.

Zann played the first half for Alpena and made several solid stops before Alex Villarreal came in to play the second half. Villarreal was tested early, but also made several big stops to keep Boyne City from adding to its lead.

Alpena will have a quick turnaround and will open up Big North Conference play at home on Thursday against Traverse City Central.

“If we don’t defend better than Anna Wuerfel is going to have our way with us,” Storch said.