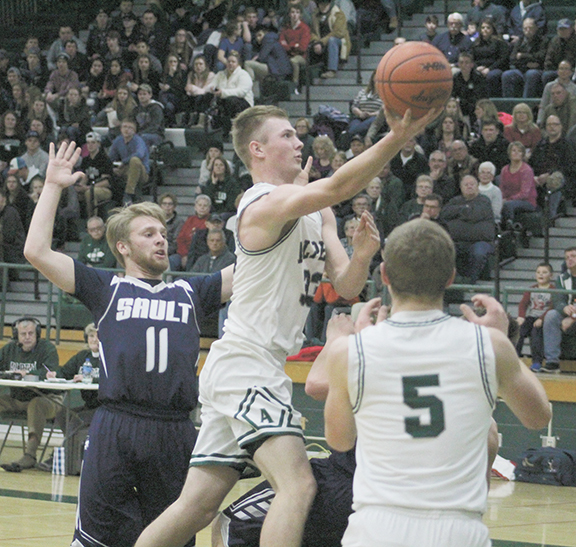 News Photo by Jonny Zawacki Alpena’s Chris DeRocher (33) scores on a layup during the second quarter of a boys basketball game against Sault Ste. Marie on Tuesday at Alpena High School.

After years of dedicating much of his time on the basketball court, Chris DeRocher finally saw all of his hard work pay off on Tuesday as he scored his 29th point with 7:13 left in the fourth quarter to claim his spot as the scoring king at Alpena High School with 1,436 points.

DeRocher finished the game with 29 points, leading the Wildcats (10-2) to a 74-45 victory over Sault Ste. Marie, but it was free-throw early in the fourth quarter that earned him the spot as the all-time points leader for the Alpena High basketball program.

After 74 career varsity games, DeRocher passed Butch Feher who set the record in 1972 with 1,435 points after playing three seasons at the varsity level. Feher held on to the scoring mark for 47 years.

DeRocher was honored after making the free-throw to break the record with a basketball with his record-breaking number written on it. Alpena head coach John Pintar called a timeout after the free-throw to allow a jam-packed crowd at Alpena High to give DeRocher a standing ovation as Pintar presented the new scoring leader with a special basketball. 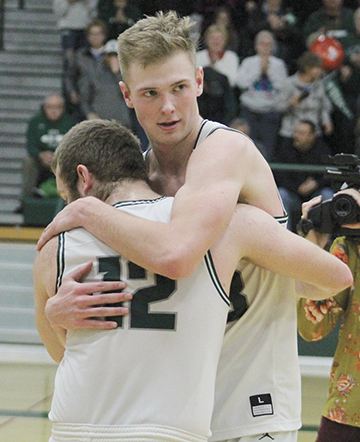 “I’ve been fortunate to be around this program for 25 years and there has been a lot of really good basketball players that have went though here and all of them have done a lot of good things,” Pintar said. “To have Chris come along and you could see early on that he had a knack for scoring, he has a skill and obviously you have to have a couple of really big seasons and last year he really took that next step and this year he’s just gone to another level and is maintaining a high level. All players who accomplish things like this need good teammates and he has had great teammates who have been apart of this. Chris has the will and drive to be successful and he’s always been an efficient scorer and that’s what stands out to me and congratulations to him for being able to this tonight.”

Knowing he was just 29 points away from a record and playing in front of a home crowd, DeRocher continued to play his game and didn’t force up bad shots. Instead, DeRocher put together another performance everyone is accustomed to seeing out of the 6-foot-6 senior as he got his teammates involved early and Alpena jumped out to 23-4 lead after one quarter. In fact, DeRocher didn’t score his first basket until midway through the quarter.

DeRocher found his rhythm and hit a pair of threes and was a force inside.

He scored 10 points in the first quarter and added 11 more in the second quarter to bring him just eight points shy of the record after a 21-point first half.

At that point it was no longer a matter of if, but when DeRocher would break the record.

With the Wildcats up by 28 points early in the third quarter, DeRocher remained in the game and continued to chase history.

He scored on a layup and got a friendly bounce on a three at the end of the third quarter to bring him to within three points of the record.

With fans in attendance on their edge of their seats, DeRocher missed on a pair of late threes in the third quarter. He was fouled and went to the free-throw line with 7:25 left in the fourth quarter and he connected on both attempts to tie the record.

Twelve seconds later, DeRocher raced up the court and received a pass, but was once again fouled on a layup attempt.

That brought DeRocher to the stripe for a chance at history.

DeRocher converted the first free-throw attempt and was congratulated by teammates and coaches before he received the ball and jogged across the court and up into the bleachers to award the record-breaking ball to his grandpa and quickly celebrated with family members that were in attendance before returning to the court.

“I just went up to the line, hoping I could make both of them. I wasn’t the hottest tonight from the free-throw line, usually I do pretty decent so it was a little different,” DeRocher said. “It was a special moment to do it front of your hometown, home team and just do it for the community. It was an amazing moment when the crowd started cheering and I went over to my teammates and coaches, hugged them and went up in the stands and gave my grandpa the ball. It was truly a special moment and it gave me chills, it’s a moment I will never forget.”

News Photo by Jonny Zawacki Alpena’s Chris DeRocher (33) scores on a layup during the second quarter of a boys basketball game against Sault Ste. Marie on Tuesday at Alpena High School.