Not quite enough: Vikings come up short in epic comeback against Alcona

Vikings come up short in epic comeback against Alcona 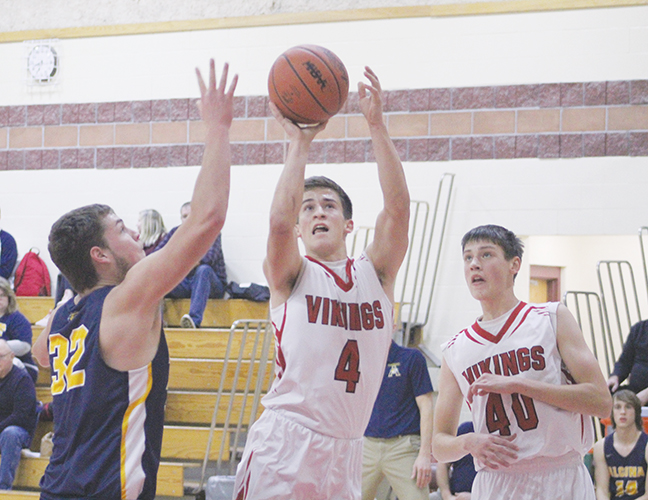 News Photo by Jonny Zawacki Posen’s Mark Wisniewski (4) tries to shoot a ball over Alcona defender Hunter Clark (32) during the second quarter of a boys basketball game on Monday at Posen High School.

POSEN — Players are always taught to play until the final whistle.

On Monday, the Posen and Alcona boys basketball teams learned why coaches constantly preach that.

The Tigers (2-1) got out to a big lead lead early and ended up hanging on in what turned into a wild finish as the Vikings nearly completed a comeback for the ages at Posen High School, but ultimately fell by a final score of 60-55.

With three minutes left in the third quarter and down 29 points, Posen was being dominated on its home floor. Trailing 49-20 and not having much success on either end of the court, getting outrebounded, committing turnovers and missing easy shots, Posen (1-2) looked like it was on the verge of an ugly loss.

Posen scored the final eight points of the third quarter, yet still trailed 49-28 heading into the fourth quarter.

The Vikings’ sharpshooter caught fire in the fourth, scoring 21 of his game-high 29 points to help Posen put a late scare into the Tigers.

Sharpe buried five triples from way beyond the three-point line and completed a gutsy four-point play after nailing a three and getting fouled which sent the home crowd and Posen bench into a frenzy.

“We probably played about the worst two and a half quarters of basketball that we physically have the ability to do. The second half we just decided to put the press on, figuring what was the worst that was going to happen. The reason we didn’t press in the first half is because if we get beat in the press you give up some easy layups to some big guys against a team like Alcona. Looking back, it probably would have been a good idea to press,” Posen coach Chris Keller said. “Fast forward to the fourth quarter, we just came alive. If we could put together an entire game like that, we would be hard to beat, but you can’t win games when you’re only doing it for one quarter.”

Alcona scored the first two baskets of the fourth quarter to extend its lead to 53-28 with six minutes left in the game.

The Vikings began to press and Sharpe led the offensive attack, throwing up shots from all over the court and hitting nothing but the bottom of the net, showing off his unlimited range.

Sharpe drilled four consecutive triples to cut a 56-39 deficit to 58-48 with 56 seconds to go and forced Alcona coach Ryan Bilbey to call a timeout.

“How we practiced this week was exactly how we played tonight. We’ve practiced half of a practice hard and the second half we’ve taken a nap and it showed up in this game,” Bilbey said. “We didn’t get the post play in the second half that we did in the first half. We were content with the ball around the perimeter and some pressure gave us trouble and we freaked out a little when all we needed to do was relax.”

The timeout didn’t cool down the Vikings any as Jeremy Misiak hit a three to cut the lead to single digits for the first time since the early stages of the game.

The Tigers broke the press on the ensuing possession and Antavius Mikazes scored a layup and got fouled, but was unable to convert the three point play.

With 26 seconds left and trailing by nine, Sharpe dribbled the ball the length of the floor and pulled up in front of the Vikings bench and drilled a crazy three-pointer while being fouled and completed the four point play after converting the free-throw to cut the lead to 60-55 with 20 seconds to play, but Posen was unable to grab the rebounds after a pair of missed free-throws by the Tigers and Alcona was able to hang on for the win.

“This just proves that my boys can do anything. I don’t think there is anything that they are not capable of. I honestly think that the last five or six minutes of this game was some of the best basketball I’ve every seen this team play. It was phenomenal,” Keller said. “When they missed the free-throws at the end, if we could have grabbed the rebound and go down and make a shot, we could have won this ball game. We almost had it, but at the end of the day, I’m always proud of them.”