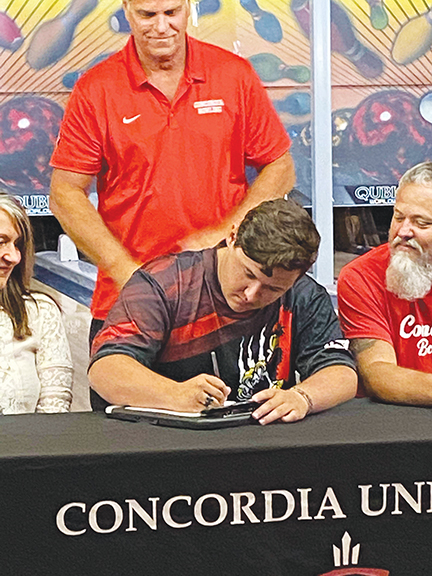 During a four-year high school bowling career with Rogers City, Jayce Sauve has always been striving to improve, always working to expand his knowledge of the game.

Sauve’s hard work was realized when he signed his letter of intent to bowl at Concordia University last month.

“It feels pretty good to sign with Concordia and do this for another four years,” Sauve said. “It’ll be nice to make more friends doing what I love.”

Sauve’s journey to Concordia is the culmination of a five-year journey after he picked bowling back up in eighth grade. When he joined the Hurons as a freshman, coach Brian Bannasch saw a bowler with plenty of potential.

“His improvement has been amazing. As a freshman, you could tell he had talent,” Bannasch said. “He’s the type of kid where he wanted to get better, he wanted to learn and he did.”

Now Sauve is the third Rogers City bowler to ink an LOI with Concordia in the last five years. Luke Augsburger just wrapped up his freshman season with the Cardinals and Zach Hazel bowled for Concordia from 2015-19.

Having coached Hazel and Augsburger, Concordia coach Doug Spicer is familiar with the Hurons’ success and got a chance to watch Sauve bowl in January.

“It’s a small school, kind of like Rogers City. I prefer small schools to big schools,” Sauve said. “I took the opportunity to go down there and it’s a beautiful campus. It’s small and easy to get around.”

Sauve, who plans to pursue studies in social work, will join the Cardinals after an exciting senior season. As a team, Rogers City’s boys squad won a regional title and finished third in the Division 4 team finals. Sauve made the final 16 in the individual finals.

“It took four years to qualify, but it feels pretty good knowing I can compete and proving to myself I am one of the best in the state,” Sauve said.

Sauve knows bowling at the next level is going to be a challenge, but he’s ready to contribute and help the Cardinals any way he can.

“It’s about bowling as a team and keeping your head up,” Sauve said. “If you bowl a bad frame, you focus on the next one and you keep your teammates’ (energy) up.”