Barkeeps shake their heads as Whitmer shuts them down again 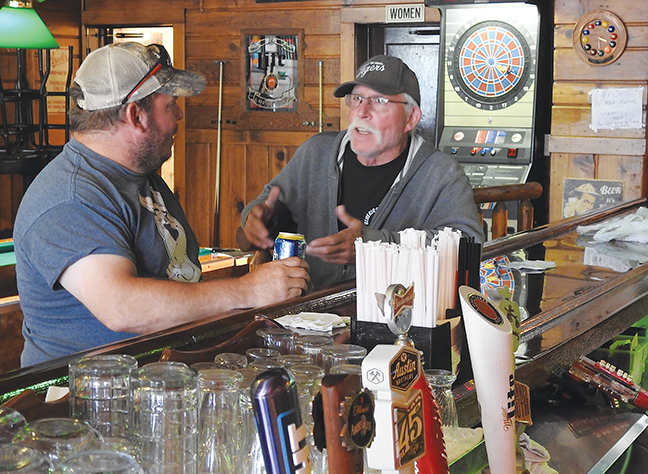 News Photo by Julie Riddle Customers Keith Repke and Raymone Carpenter enjoy a last drink on Thursday morning before neighborhood bar Barilik’s Tavern in Alpena is closed today by order of the governor.

ALPENA — Gov. Gretchen Whitmer’s order closing many bars in the state beginning today is a tough blow for small business owners who were just getting back on their feet after the last round of shutdowns, said Kelle Barilik, owner of Barilik’s Tavern on Alpena’s north side.

Many bars, along with other businesses, were ordered by Whitmer to shut their doors the day before St. Patrick’s Day and stayed closed for two months, part of the state’s efforts to corral the coronavirus.

Up North bars reopened before Memorial Day when the virus slowed, but now, after several large gatherings and packed bars throughout the state led to outbreaks, bars that earn more than 70% of their profits from alcohol have been ordered to close indoor service once again, leaving owners shaking their heads.

Outdoor bar service is still allowed, and the Legislature has made it easier for bars to sell alcohol to-go. Many Alpena-area bars, from Bogarts to Chief’s to Austin Brothers to the Sand Bar, sell enough food to stay open.

As of this week, there are only 27 known or presumed active cases of coronavirus infection among Northeast Michiganders. Most of the 154 residents of Alpena, Presque Isle, Montmorency, or Alcona counties infected since mid-March have recovered or died. Health officials warn some people may be infected without showing symptoms or without getting a test to confirm coronavirus infection.

Barilik said she understands the need to contain the virus. She blames the closure of her business on the people who wouldn’t follow guidelines — like wearing a mask and staying six feet from others — and sparked the outbreaks that led to the governor’s decision this week.

The state will feel the pinch of bar closures, Barilik mused, noting the over $1,000 in taxes she pays to the state every month — money she said goes to pay for police, teachers, roads, and more.

She’ll be OK financially, she said, but she’s worried about the employees who once again won’t be getting paychecks, this time without the promise of extra unemployment income from the federal government after a $600-a-week supplement expires today.

Congress is working on a new coronavirus stimulus plan, but Democrats and Republicans have deadlocked.

Barilik recently purchased Greka’s Tavern, a popular bar in Rogers City, and will spend her newly gained downtime getting it ready for business — whenever she’s allowed to open.

At the counter having a drink with a few friends at Barilik’s Thursday morning, Keith Repke wasn’t too concerned about the neighborhood bar closing up for a time.

Customers have been through it before, Repke said. It would be a shame to lose their relaxing after-work stop, though, he acknowledged.

At Hide A Way Tavern on Thursday evening, a waitress wasn’t sure if she’d have a job the next day or not.

A sorrowful post on Facebook announced that Joe’s Bar on Ford Avenue would have to close indefinitely at midnight Thursday night. A small, frustrated-looking group seated on barstools at the bar late Thursday morning said they didn’t have anything to say that could be printed. The bar later learned it doesn’t fall under Whitmer’s order and will be able to remain open.

Kris Conger, owner of Black Sheep Pub, said she’s one of the lucky ones that sells enough food to stay up and running, albeit with the limited, widely spaced seating mandated when dining establishments were allowed to reopen just before Memorial Day.

She’s sorry to see other business owners endangered by another closure, and wonders if more allowance could have been made for Northeast Michigan’s relative lack of new cases of COVID-19.

A dome over our area to keep sickness away would be nice, she said with a laugh.

As of Thursday afternoon, he was certain he was going to have to kick customers out of his bar again, a fact he accepted with a whaddya-gonna-do shrug and a determination to find some way to keep money flowing into his business.

After a closer look at the governor’s order Thursday evening, Kowalski realized with relief that his non-alcohol income — based on 2019 numbers — exceeds the required 30% of total income.

He’s still going to try to branch out and add outdoor seating and new menu items, though, he said.

After all, nobody knows what the future may hold.