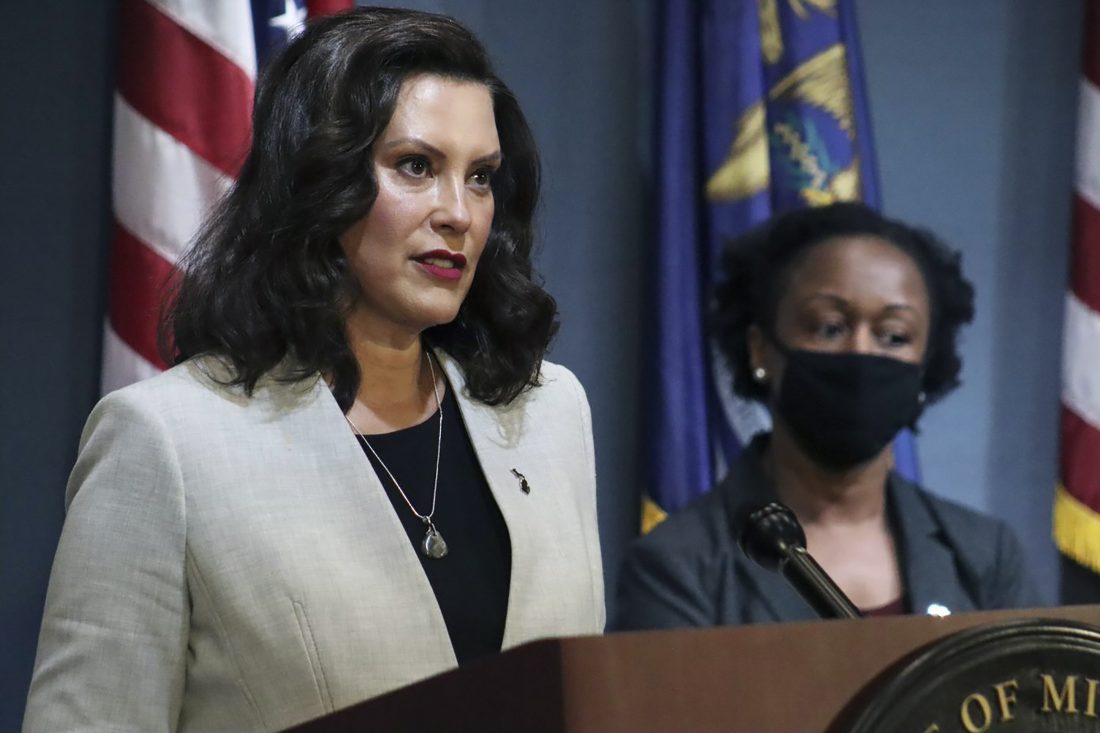 AP Photo In a pool photo provided by the Michigan Office of the Governor, Michigan Gov. Gretchen Whitmer addresses the state during a speech in Lansing, Mich., Wednesday, June 17, 2020.

HARRISVILLE — Alcona County bars that were only recently allowed to serve customers indoors will put customers out again after Gov. Gretchen Whitmer today closed indoor bar service for much of the state to prevent another surge of the coronavirus.

Alpena, Presque Isle, and Montmorency counties are spared from the governor’s latest order.

The governor’s order affects all but the most northern counties in the state and applies to establishments with on-premises retailer liquor licenses that earn more than 70% of their gross receipts from alcohol sales.

That means most brewpubs, distilleries, and vineyards can stay open, but most traditional bars, nightclubs, and strip clubs will have to end indoor service.

Whitmer’s administration has divided the state into eight regions as part of its plans to reopen the economy after statewide shutdowns this spring meant to prevent the virus’ spread. Regions 6 and 8, which include Alpena County and the counties west and north of it, including the Upper Peninsula, are not impacted by the order.

Alcona County, which is lumped into Region 4 with Saginaw, Bay, and Midland Counties, is affected.

The move was made in an attempt to slow a recent surge in COVID-19 infections around the state, much of which is attributed to gatherings in bars. The Lansing State Journal reported today, for example, that 138 people from 14 counties had been infected with the coronavirus after a crowded night at an East Lansing brewpub.

Bars still can offer outdoor service and cocktails to go, Whitmer said in a press release.

“We owe it to our front line heroes who have sacrificed so much during this crisis to do everything we can to slow the spread of COVID-19 and reduce the chance of a resurgence like we are seeing in other states,” Whitmer said in a statement, referring to the disease caused by the virus. “If we want to be in a strong position to reopen schools for in-person classroom instruction this fall, then we need to take aggressive action right now to ensure we don’t wipe out all the progress we have made.”

Bars have become problematic around the country, as they have become a breeding ground for the spread of the coronavirus as, Whitmer says, alcohol makes people more prone to crowd close together and less prone to wear face masks.

Some of the counties affected by the order, however, have few confirmed cases of infection or deaths, while other counties with more widespread infection are not affected.

Public health officials report only 18 Alcona County residents confirmed infected by the virus, with a pair of deaths. Officials report 99 infected from neighboring Iosco County in the same region, nine of whom have died.

By comparison, officials report 109 infected Alpena County residents, 12 of whom have died.