Woman shares story of reporting sexual assault when most don’t 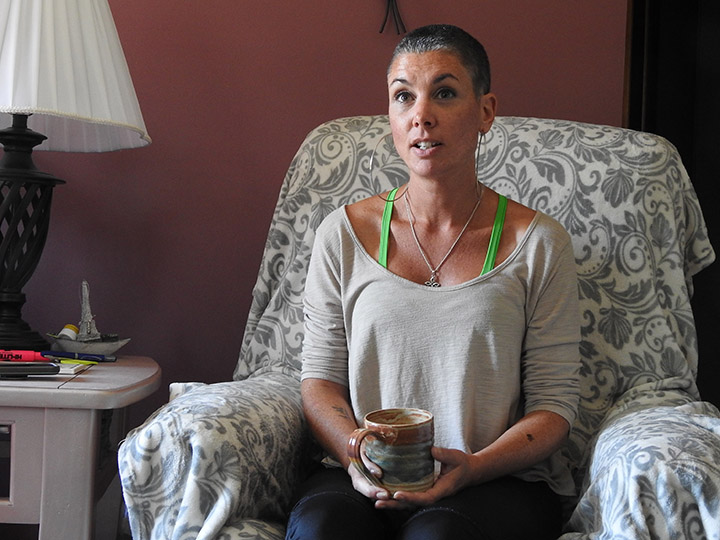 News Photo by Julie Riddle Alpena resident Tara Roe talks about accusing a man of sexual assault after he groped her in a bar.

ALPENA — At the end of January, Tara Roe was bartending when she noticed a customer watching her.

When he grabbed her wrists as they were talking, she told him not to touch her.

When he moved his body close to hers and spanked her, she warned him again.

When he reached between her legs as she was bending over, for a moment, she blamed herself.

Then, she said, she got furious.

Chasyn Wilkinson, of Lachine, was sentenced last week in Alpena’s 26th Circuit Court after he admitted to groping Roe in late January, while he was drunk. A judge sentenced him to 116 days in jail — all of which Wilkinson has already served — and 60 months’ probation.

He also has to register as a sex offender.

In a victim impact statement shared before sentencing, Roe told her attacker she has a long history of people thinking it’s OK to put their hands on her.

This time, she told him, she decided to do something about it.

In that way, she’s different than many victims.

In 2018, the latest year for which data is available, 57 sexual assaults were reported to Alpena County police, according to Michigan State Police data.

The number of actual assaults that year is probably at least four times that number, according to a study conducted by the U.S. Bureau of Justice Statistics, which showed about 75% of sexual assaults aren’t reported to police.

Check out a video of The News’ interview with Tara Roe below. On mobile? Turn your smartphone or tablet horizontally for the best viewing experience. Story continues below video.

Women interviewed for the study said they didn’t report assaults because they were afraid the police wouldn’t — or couldn’t — help. Some said they feared retaliation, or that it was a personal matter.

Some said being assaulted wasn’t important enough to report.

“It’s OK for anybody to say, ‘I’m not OK with that, don’t touch me,'” Roe told The News. “Letting it happen only enables it to happen more.”

Going to the police with her story wasn’t easy, Roe said.

Despite having video of the entire incident from the bar’s security cameras to prove what she said was true, telling the story — with all its painful and embarrassing details — was hard.

She remembers sitting nervously in the county prosecutor’s office, waiting to give courtroom testimony about what happened, knowing the man who assaulted her would be able to see her again.

“It’s easier to stuff it down and move on with your life,” she admitted.

Sitting in her Alpena living room, Roe talked candidly about her life — about the times she was raped as a teenager. About the string of men who, she said, led her to do sexual things she didn’t want to do. About choosing to stay in relationships with them anyway.

Women want love, she said, and they’ll do what it takes to get it.

Many times, when men put their hands on her in a bar, she would feel shrivelly inside, but she’d laugh and go along with it.

That’s what society expects of women, she said.

“People think that behavior is acceptable because people accept it,” Roe said. “And I’m so tired of it.”

She wasn’t a good person in the past, Roe said. She wasn’t good to the men in her life. She lied, flew into rages. She’s lived a life of struggle, and dysfunction, and abuse.

But, she said, no woman deserves to be groped by a man in a bar, whoever she may be.

At Wilkinson’t sentencing, Wilkinson told the court he was sorry for what he’d done under the influence of alcohol.

She forgave him, Roe told the man who assaulted her.