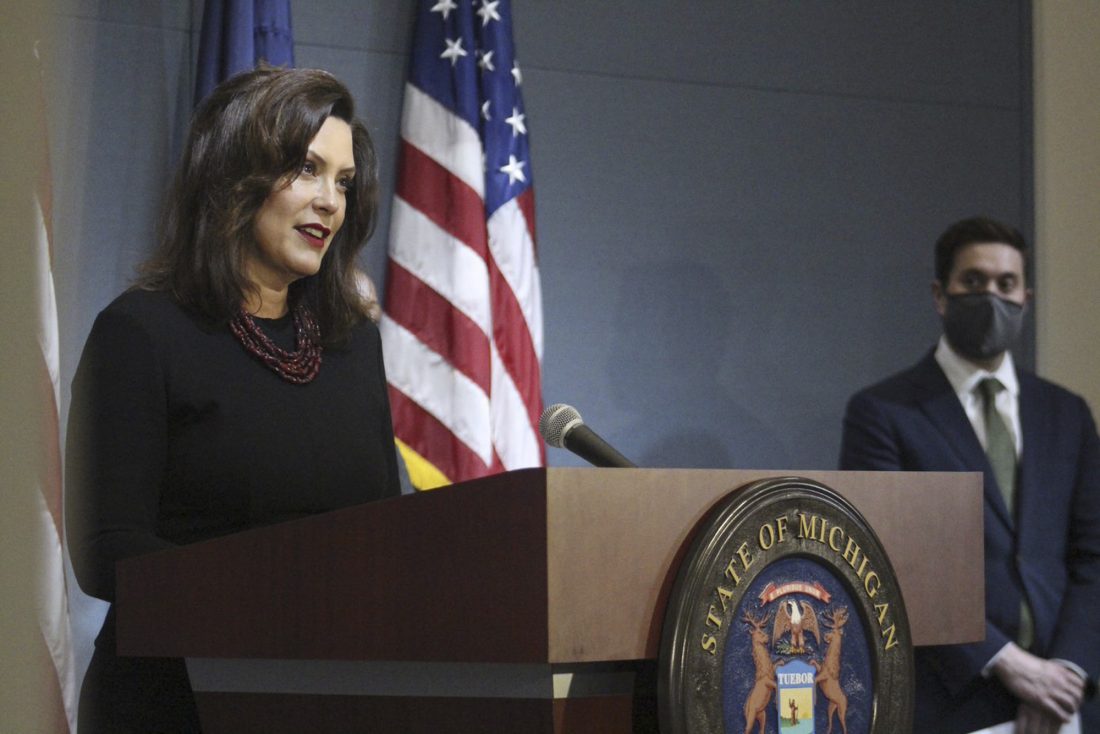 In this photo provided by the Michigan Executive Office of the Governor, Gov. Gretchen Whitmer speaks during a news conference Friday, May 29, 2020, in Lansing, Mich. Whitmer hinted that she will soon reopen more regions of Michigan, expressing optimism as long as the rate of new coronavirus cases continues downward and testing increases. (Michigan Executive Office of the Governor via AP)

The governor moved regions comprising 93% of the state’s population to phase 4 — “improving” — two weeks after she announced that northern Michigan could advance to that stage. Businesses where close contact is necessary, such as gyms, hair salons, theaters and amusement parks, will remain closed under a new order.

Retailers can reopen to customers without an appointment on Thursday and restaurants can offer dine-in service on June 8, with capacity limits. Children’s day camps, pools, libraries and museums can also reopen June 8. Groups of up to 100 can gather outside if they stay 6 feet apart, up from a threshold of 10 people. In-home services such as housecleaning can resume.

Whitmer said her goal is to shift the state to phase 5 — “containing” — before July 4, so businesses such as barbershops, indoor gyms, theaters and overnight camps can open. She plans later this week to let the Upper Peninsula and Traverse City regions, where COVID-19 cases and deaths have been low, proceed to stage 5. Phase 6 is “post-pandemic.”

“We’re taking a big step forward today. It’s undeniable,” said the Democratic governor, whose restrictions have been unsuccessfully challenged in court by Republican lawmakers and others. “We’ve gone from a moment where we’ve said, ‘Everyone needs to stay home except for these essential things’ to now, ‘It’s OK to reengage except for a few of these things that still are too risky.'”

More than 5,600 people have died from coronavirus complications in Michigan, fifth most in the country. The state on Monday reported 25 additional deaths.

Dr. Joneigh Khaldun, the state’s chief medical executive, said the number of people sickened by the virus continues to rise at a slower rate, and hospitals have capacity. She cautioned that just one person can infect many.

“It’s incredibly important that as businesses open up they do so in the safest way possible, following the safety protocols and guidance put forth by public health officials,” Khaldun said.

For most people, the new coronavirus causes mild or moderate symptoms, such as fever and cough that clear up in two to three weeks. For some, especially older adults and people with existing health problems, it can cause more severe illness, including pneumonia, and death.

Safe Salons for Michigan, a coalition of more than 350 salons, barbershops and spas, expressed frustration that the businesses will stay closed.

“Not only is this gutting the salon industry, but we are also losing business to neighboring states every day. We firmly believe we are safer open than closed,” Mike Sarafa, of the Alline Salon Group, and Kevin Lent, of BAMF X2, said in a statement.

Justin Winslow, president and CEO of the Michigan Restaurant & Lodging Association, credited restaurants in northern Michigan, which reopened May 22, for setting “a tremendous example for the rest of the state.”

Also Monday, the Whitmer administration announced that can and bottle returns can resume starting June 15.