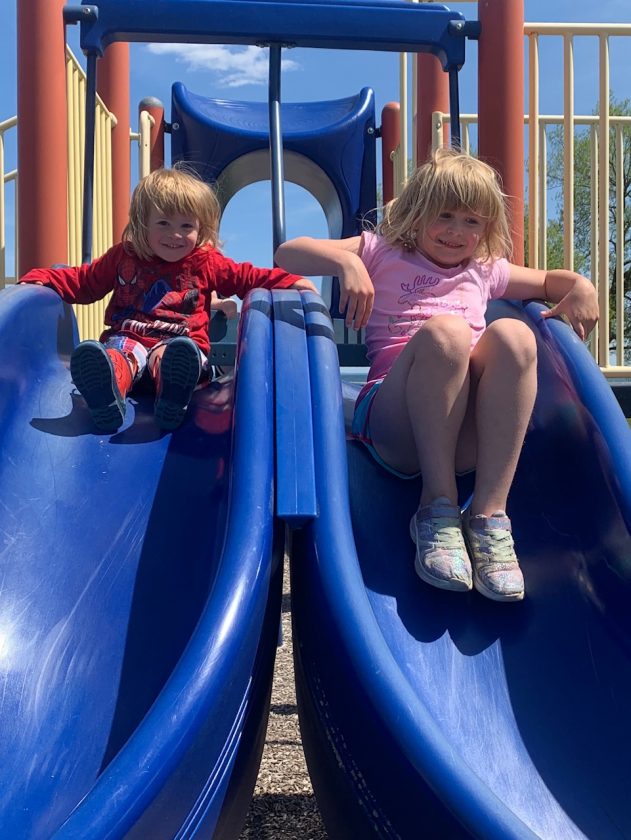 News Photo by Steve Schulwitz Emmett Parker, left, and his sister, Lillian, race down one of the slides at Starlite Beach in Alpena today. The splash pad and restrooms are expected to open for the season later this week, after some simple maintenance is completed.

ALPENA — Last week, city officials announced a delay in the opening of the splash park and restrooms at Starlite Beach.

If things go according to plan, however, both should be open by the end of the week.

City Engineer Rich Sullenger said that, when employees went to open the splash park for the season last week, they discovered an activator switch had gone bad and the park could not operate as designed. Sullenger said the part is ordered and swapping it out is a simple process.

He said the issues at the two park amenities were never anything serious and long-term closure was never considered.

“These things happen and are regular maintenance issues and nothing serious,” Sullenger said. “We have the part of the splash park on order, and the contractor is going to be putting the faucets and everything that was taken apart back together. I think they will be open sometime this week.”

Today, the lack of the two highly used facilities didn’t hinder people from enjoying the warm weather at the park. Families with young children filled the swings, teeter-totter, slides, and climbing structure.

More than a handful of people soaked up a few rays while laying in the sand close to the edge of the water.