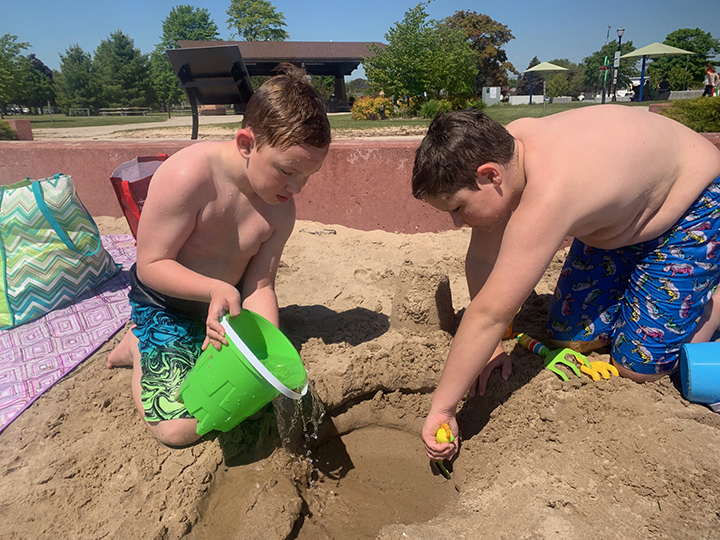 News Photo by Steve Schulwitz Second-grader Mason Werda, left, and fourth-grader Nolan Werda, both of Alpena, play in the sand on Thursday at Starlight Beach. School leaders are trying to protect the classrooms the Werdas and other students will return to as they budget for steep cuts to state revenue.

ALPENA — Local school officials hope to spare cuts to classrooms as they plan for big cuts in state payments.

But schools still don’t know how steep those cuts might be as lawmakers debate the state budget.

State officials estimate Michigan’s School Aid Fund lost $1.1 billion because of the economic downfall caused by shutdowns related to the coronavirus. While lawmakers have until Sept. 30 to finalize the state budget, school districts are required to adopt a balanced budget by July 1.

School officials expect reductions in per-pupil payments from the state, which make up the majority of a school district’s revenue. The state pays schools based on enrollment, with most districts receiving $8,111 per student this year.

Alpena Public Schools Board of Education President Gordon Snow said there will probably be budget cuts, but he didn’t know as of this week what those cuts would be. The board’s Finance Committee will discuss the budget on June 25. The district has a $42 million annual budget and expects to end the current budget year with about $5.4 million in the bank, according to the most recent budget posted online.

Alcona Community Schools and Rogers City Area Schools, meanwhile, are planning for cuts of $700 and $600 per student, respectively.

Snow said Alpena has to be prepared “for any eventuality,” but it’s hard to do when school officials don’t know what their income will be.

“We’re doing the best we can with not a whole lot of information, and it ends up being a guess,” Snow said. “When we finally find out from Lansing how much it is, then we can modify one way or the other, as necessary. But, for now, we’re just winging it, and that’s not a comfortable position for anybody to be in.”

Lawmakers had agreed in budget talks for the current year to have the 2021 budget done by summer, but that agreement was set aside because of the uncertainty caused by the pandemic.

In addition to state revenue, schools also don’t know what enrollment will be and what classroom instruction will look like. Students finished last school year online or through correspondence courses after Gov. Gretchen Whitmer closed school buildings in March to prevent the spread of the coronavirus.

The governor has said students can return in the fall, but how they’ll do safely — and whether parents will feel comfortable sending their kids back — remains to be worked out.

There aren’t a whole lot of places a district can cut without cutting people, Snow said, with so much of the budget dedicated to salaries and benefits, as well as utilities that have to be paid.

The potential cuts also come at a time when Alpena is bargaining with its instructional assistants and bus drivers unions, whose contracts are set to expire on June 30. Snow said neither contract has been settled.

Alcona Superintendent Dan O’Connor said the district has a budget in place, but they know it will be amended multiple times. He said he hopes the $700-per-student decrease he budgeted is the worst-case scenario.

O’Connor said the cut amounts to a $400,000 to $500,000 decrease for the district, a significant chunk of its roughly $8.2 million annual budget. The district expects to start the next budget year with about $500,000 in savings, according to the budget posted online.

To account for the cuts, the district has chosen not to fill the positions of employees who have retired or resigned, and has eliminated a bus route, since ridership is down.

“We’re doing everything we can to keep this as far away from the classroom and keep everybody employed in the district,” he said. “We know it’s a very challenging time, economically, and we believe we tried to minimize the cuts as much as we can by absorbing staff that have left by natural attrition.”

In addition to a $600-per-pupil decrease in state revenue, Rogers City Superintendent Nick Hein said his school board prepared for the worst-case scenario.

Officials plan to lose 30 students — which Hein called “a significant drop” — should parents choose to homeschool their kids because they’re worried about the virus. Hein said the board also decided to eliminate four staff positions.

The Rogers City board will on Monday consider a $5.2 million budget balanced by using $81,945 out of the district’s savings. That would leave $566,660 in the bank, enough to cover about 11% of the district’s annual expenses.