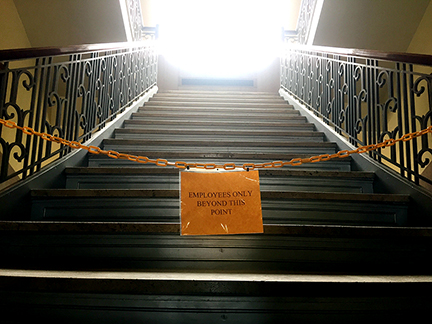 News Photo by Julie Riddle Alpena’s 26th Circuit Court -- closed to the public since mid-March, as shown in this May 19 photo -- will gradually reopen to in-person hearings, but most court activity will be conducted virtually for the time being.

ALPENA–As businesses reopen to masked and socially distancing patrons, courts in Northeast Michigan will continue to conduct their business virtually as much as possible, according to county-by-county reopening plans posted online last week.

Detailed information about the coronavirus-related plans for each courtroom, available through the Michigan One Court of Justice website, will keep the public informed about courts’ gradual return to in-person hearings — something that won’t happen for some time in Alpena, Alcona, Montmorency and Presque Isle counties, the plans indicate.

Most hearings at most Northeast Michigan courts will continue to be held online for the foreseeable future, making use of the Zoom videoconferencing software available to each judge in the state and livestreamed on YouTube to allow public access.

Occasional in-person hearings, offered at the discretion of the presiding judge, will be limited to 10 people — or to 20 people in Presque Isle County, which has seen no new COVID-19 cases in the past month and is at the second step of a four-phase plan for reopening courts.

That county will also allow an increase in in-person attorney-client visits and public use of courthouse facilities, plans show.

Use of Zoom and livestreaming has gone remarkably well, according to Judge Benjamin Bolser, chief judge of the 26th Circuit Court. YouTube channels have been developed for each local court, and live videos regularly have multiple viewers during any given hearing.

Northeast Michigan’s courts, interrupted briefly in mid-March, when Gov. Gretchen Whitmer closed businesses and ordered Michiganders to stay home unless absolutely necessary to prevent the spread of the coronavirus, resumed activity almost immediately, with a transition to virtual hearings.

Ensuring public access from the beginning, local courts have been leaders in conducting court activity virtually and were among the first in the state to livestream hearings.

Elsewhere — in Emmet and Charlevoix counties, for instance — hearings aren’t available online, and hearings are only accessible to the public only through in-person presence in the counties’ courtrooms, with a prohibitive 10-person limit.

An in-person hearing was held in Alpena County’s 88th District Court this week, with up to 10 — and occasionally 11 — people in a courtroom together, masked and appropriately distanced.