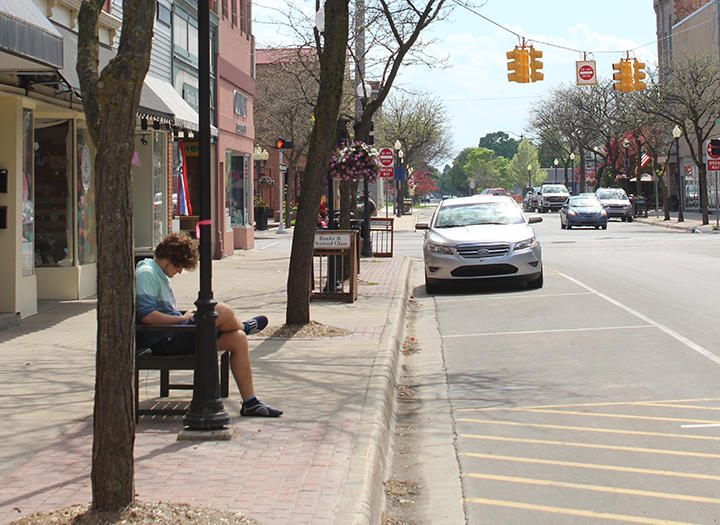 News Photo by Steve Schulwitz Joey Lanier relaxes on a bench in the shade in downtown Alpena on Tuesday. The Alpena Downtown Development Authority is in the process of adding and replacing trees in the DDA district.

ALPENA — An idea considered by the Alpena Downtown Development Authority that could have closed a small section of 2nd Avenue downtown has been scrapped.

The DDA had considered the closure to make room for more outdoor dining and shopping, especially important, some said, in light of coronavirus-related restrictions requiring diners and shoppers to stay farther apart.

After hearing concerns from local businesses and residents, however, the DDA has moved on from the idea. The board also considered using two allies near the Fresh Palate for outdoor dining, but officials decided it would take a large amount of improvement to make them suitable for customers to eat.

“It’s dark, cold, and the wind comes at you like a coming through a tunnel,” he said. “The lighting is poor, and it is just not the type of place I think people are going to want to eat.”

Another option considered is utilizing three handicap parking stalls at the end of the pocket park next to Mango’s Tequila Bar. Tables could be added and patrons of the Fresh Palate and the Mexican restaurant could dine there. That could, however, make it more difficult for people who need to park close to the businesses because of mobility issues.

For now, at least, Mahler said he isn’t sure what else can be done to create more outdoor dining space, but added DDA is seeking ideas from businesses owners in that area.

“Right now, it seems there is no path forward, and there are a lot of hurdles, no matter which way we could go,” Mahler said. “We’ll continue to be open-minded and maybe the businesses can come up with something we haven’t thought of.”

The DDA does appear to be moving toward replacing or adding trees downtown.

There are 14 areas downtown, officials said, where trees used to be but are no longer, and as many as five trees are in poor health and likely need to be taken down and replaced.

Mahler said he was told by Alpena Engineer Rich Sullenger that snow plows and salt during the winter make it difficult for trees to stay alive and healthy.