Tenants grapple with evictions during pandemic 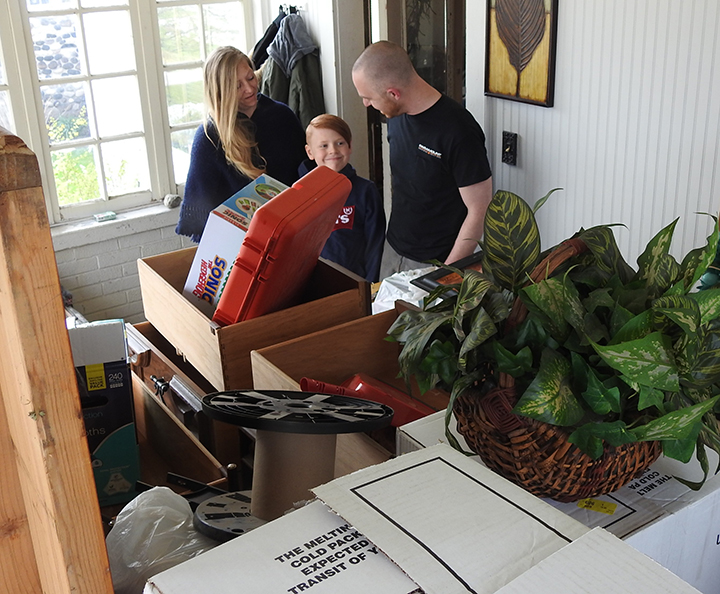 News Photo by Julie Riddle Boxes and holiday decorations fill the front porch of Marlena Gibson and Levi Behnke and Levi’s father, Matthew Behnke, as the family prepares a hasty move out of their Alpena home.

ALPENA — A head-high stack of boxes, furniture, holiday decorations and toys filled the front porch of the sunny Alpena home.

On the table, a creased paper gave the mother and her 8-year-old son 30 days to get out.

“Why would you do that to somebody at a time like this?” Marlena Gibson wondered, eyes bright with tears, as she stood in the wood-floored dining room of the home she is being forced to leave as a pandemic rattles a nation.

Northeast Michigan is beginning to breathe easier in its ongoing fight against the coronavirus. More recovered cases of COVID-19 are reported daily, including the 27 added to Alpena County’s recovered total on Wednesday.

Restrictions are lifting, with stores and restaurants able to open for business tomorrow, albeit with not-back-to-normal safety precautions in place. 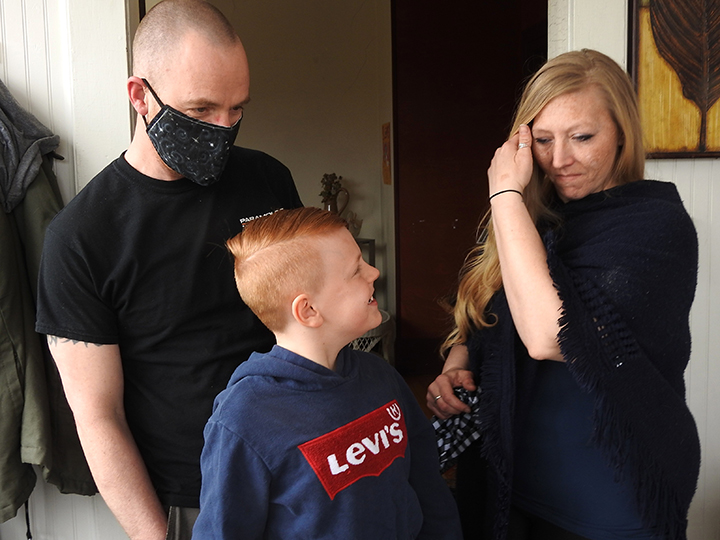 News Photo by Julie Riddle Staying cheerful for their 8-year-old son, Levi, Matthew Behnke and Marlena Gibson spend a few moments on the front porch of the Alpena home they have to leave in a hurry as tenants and landlords handle evictions in the wake of the coronavirus.

The future, though, is far from easy for those who may be forced to move during a time when finances are uncertain, housing is hard to come by, and home feels like the only safe place to be.

NOT PLANNING TO MOVE

Gibson wasn’t planning to move. Not now, not soon. The little house on 2nd Avenue, where she lives with her son Levi and their cat and dog, was supposed to be home for years to come.

Suddenly, as the state and nation combat a massive health crisis, home and security turned into boxes on the porch.

Gibson’s landlord dropped the bombshell at the beginning of May, serving notice that her one-year lease that expires on May 31 will not be renewed. 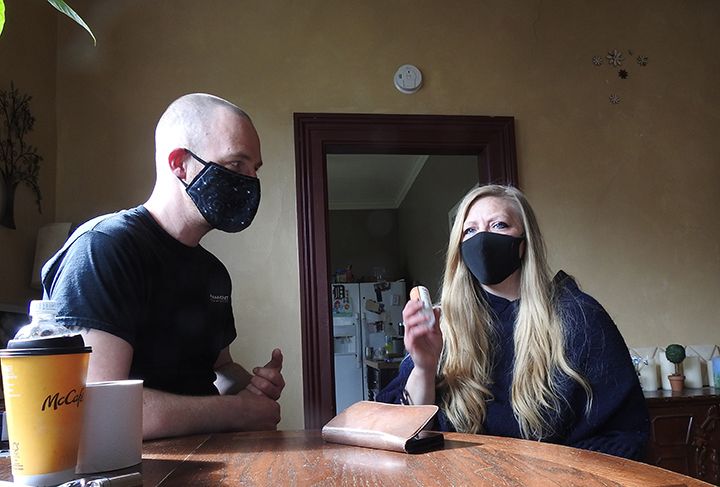 News Photo by Julie Riddle Alpena renters Matthew Behnke and Marlena Gibson worry about their future after an eviction notice required them to move out of their home in the middle of global health crisis.

Legally, the family can’t be kicked out right now.

Citing the need to keep people in their homes to fight the spread of the coronavirus, Gov. Gretchen Whitmer signed a series of orders forbidding evictions, beginning in late March.

Until at least June 12, Michigan landlords are legally unable to remove tenants, whether by a seven-day notice for unpaid rent or 30-day notice-to-quit for any other reason, with the exception of criminal activity on or damage to the property.

Tenants facing eviction from federally-funded housing may be able to stay in their homes even longer because of the Coronavirus Aid, Relief, and Economic Security (CARES) Act, which offers further protections, until at least the end of July, for those who can’t pay their rent because of coronavirus-related life changes.

She could fight the order to move out and stay a little longer, Gibson knows.

Even if the move were postponed, though, the outlook for finding a new home would be bleak.

When Gibson and her ex, Matthew Behnke, who is on the lease and helps pay the rent, heard by word of mouth that a rental house had just become available a few blocks away, they felt they had no choice but to take it, and feel lucky.

Rentals are scarce in the Alpena area, according to Grace Marshall, broker-owner of Up North Property Services.

Blocked by coronavirus-related restrictions, property owners were unable to show rentals until that restriction was lifted last week. With evictions suspended and few people moving by choice because there’s no place to go, not many vacancies remain, and those that do are snapped up quickly, Marshall said.

They haven’t seen the inside of their new rental, Gibson said. They don’t know if it will be safe for their son, who has respiratory difficulties. All they know is that they can’t open the windows and are not allowed to paint the walls.

And, their new landlord told them, if their rent check is late, he will start eviction proceedings immediately.

The family will have enough money to make the initial payments to secure the new rental, Behnke hopes. His hours at his manufacturing job have been reduced because the company isn’t filling as many orders, its business hurt by the coronavirus.

“What if we get sick right now?” Behnke wondered. A quarantine for his family would mean hours not worked and money not earned, and, possibly, rent not paid.

Evictions are stalled, in Northeast Michigan as elsewhere, but they are coming. At the Alpena County District Court, only nine landlord/tenant cases are pending, but landlords have been calling, asking when they can file paperwork to have their tenants removed.

Some tenants could be handed an eviction notice as early as June 12 — possibly meaning multiple individuals or families losing their homes at once at a time when rental properties are scarce.

There were 182 evictions in Alpena County in 2018, and another 114 in the three outlying counties, according to data from the State Court Administrative Office, compiled by the Michigan Eviction Project at the University of Michigan and reported by MLive.

The same study revealed that just 4.8% of Michigan tenants were represented by an attorney during eviction proceedings between 2014 and 2018.

Over 83% of landlords had a lawyer for the same court cases.

People who meet federal poverty guidelines or are 60 or older can get free legal help with landlord/tenant issues, along with other legal services, from Legal Services of Northern Michigan.

In 2019, the LSNM Alpena office — covering the four counties in the Alpena region — assisted 172 people with housing issues. More than 80 of those were directly related to landlord/tenant issues.

Unemployment filings that have increased by 500% in Alpena County since mid-March mean many more people may now be eligible for free legal help with landlord/tenant issues.

RENTING IS A BUSINESS

Landlords aren’t all bad guys, going around evicting people for fun, said Marshall, of Up North Property Services, who sees the darker side of tenancy as she represents property owners when eviction becomes necessary.

Many renters are conscientious about making rent payments, some even bringing in their federal stimulus checks to make sure rent got paid, she said.

That’s not true for all renters, however, and landlords sometimes find themselves providing housing while getting nothing in return.

Unable to evict now, and possibly unable to do so until at least the end of July, when federal moratoriums are set to expire, landlords can’t bring in new, paying tenants and don’t know if they’ll ever be able to get the money they’re owned for the people currently living on their property.

Although renters can’t be kicked out for not paying rent, they still owe that money, the governor’s orders specify, and can be taken to court by property owners.

Though the agency receives regular calls for help, the agency has had to suspend voucher distribution to make sure there is enough funding to assist the low-income renters already using the vouchers, many of whom need more rent assistance now because of lost income.

More federal funding has been requested in hopes of resuming distribution of the 375 vouchers the agency has available to use in seven counties, Amlotte said.

Renting is a business, Behnke understands. But the uncertainty and the constant change of present times, the not knowing what’s coming or why it’s all happening, makes an order to pack up and move seem overwhelming.

“I know it’s not just about us,” Gibson said. “But I didn’t think we were going to be a part of it. What did we do to ask for that?”

News Photo by Julie Riddle Alpena renters Matthew Behnke and Marlena Gibson worry about their future after an eviction notice required them to move out of their home in the middle of global health crisis.

News Photo by Julie Riddle Boxes and holiday decorations fill the front porch of Marlena Gibson and Levi Behnke and Levi’s father, Matthew Behnke, as the family prepares a hasty move out of their Alpena home.

News Photo by Julie Riddle Staying cheerful for their 8-year-old son, Levi, Matthew Behnke and Marlena Gibson spend a few moments on the front porch of the Alpena home they have to leave in a hurry as tenants and landlords handle evictions in the wake of the coronavirus.

The free press must be protected