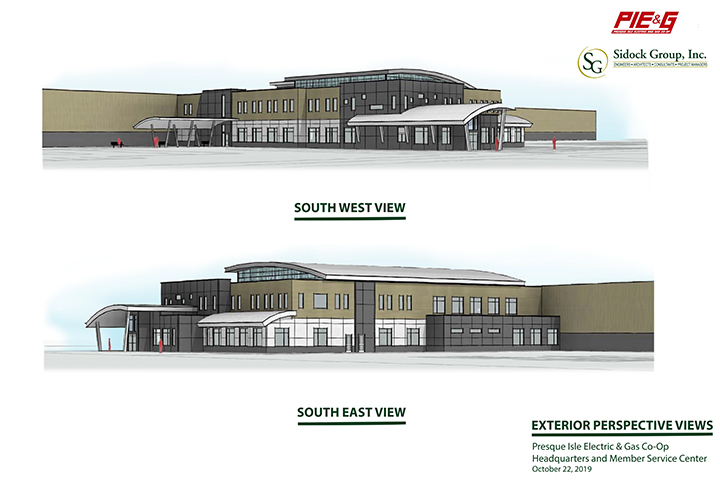 Courtesy Image This artist’s rendering provided by Sidock Group Inc. depicts the proposed design for Presque Isle Electric and Gas Co-op’s headquarters and service center to be built at the former Onaway airport.

ROGERS CITY — An Oakland County man suing Presque Isle County over an allegedly breached contract at the Leo E. Goetz Airport is now also suing the Presque Isle Electric and Gas Co-op, which is now building a new headquarters on the airport property.

Anthony Wyatt is suing the county for more than $25,000, claiming the county violated the terms of his lease for hangar space at the Onaway airport by allowing the property to fall into disrepair and close before his contract expired on Dec. 31, 2020.

The county Board of Commissioners in January gave the airport to PIE&G so a new, $22 million headquarters and service center could be constructed there.

Documents filed in the 53rd Circuit Court on March 2 claim the county ignored Wyatt’s demand for the lease to be honored when the county board sold the property to PIE&G. Wyatt says the utility company will not grant him access to his airplane hanger. It wasn’t immediately clear whether Wyatt had any property in the hangar.

“My client would like to get this matter resolved one way or the other,” Wyatt’s attorney, Jay Schwartz, said.

Attorney Michael Ekdahl, who is representing PIE&G in the lawsuit, asked in a court filing for Judge Eric Stone to dismiss Wyatt’s complaint and order Wyatt to cover the cost of the attorney fees the utility incurred to defend itself.

“We do not believe the lawsuit will impact the building project, since it appears the plaintiff is only seeking money,” Ekdahl said in an email.

“Ultimately, if the parties cannot resolve their differences, there will be a jury trial,” he said.

Calls to county attorney Joe Kwiatkowski were not immediately returned.