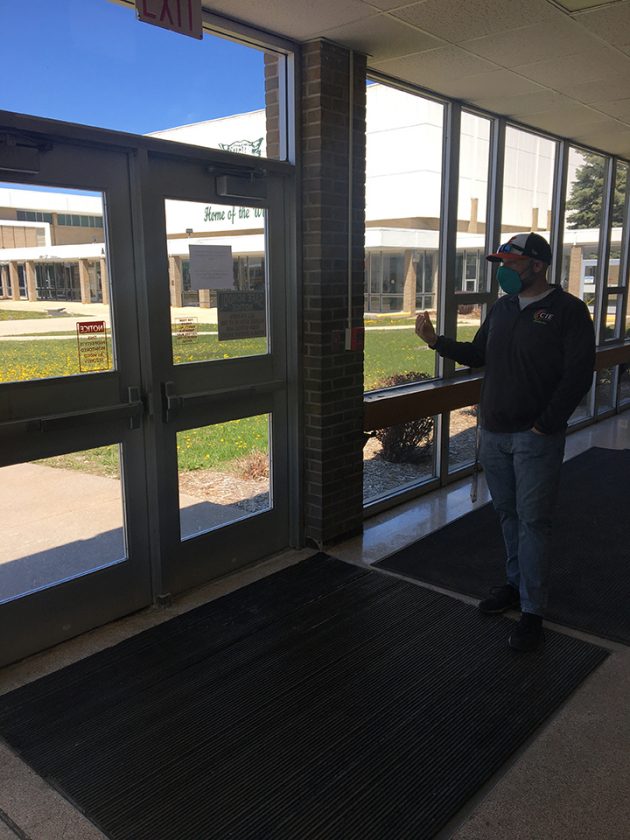 Alpena High has 85 exterior doors, Berriman said, making access easier than it should be for visitors who shouldn’t be there.

Currently, students enter through the front, where the Wildcats logo can be seen from 3rd Avenue, while visitors enter from the back, off of Garden Street. During the school day, the two entrances are open for students and visitors to come and go, Berriman said.

“The goal is to create one secure entrance, where we have one entrance during the day that everybody comes in and out of,” Berriman said. “Right now, we have to have our security guards posted at a corner where they can see both entrances, as well as monitoring the glass entrances into the auditorium area, which are notorious for not shutting behind people.”

Such shortcomings are among the reasons the district asked voters in March to approve the sale of $33.9 million in bonds to fund school building upgrades. Property owners will repay the bonds over the next 25 years through about 1.8 mills in property tax, or about $90 a year for the owner of a $100,000 house. Taxes are not expected to increase because existing bond debt is about to be paid off.

Along with new roofs and new boilers for a majority of the schools in the district, bond money will be used to improve security infrastructure, such as new secured school entrances and cameras.

The entrance at Lincoln Elementary School, for example, will be upgraded for security and visibility and locked doors will be added to isolate the Wildcat Clinic, a full-service community health center housed at the school. At Alpena High and Thunder Bay Junior High schools, renovations include a secure entry and card access system to doors.

John VanWagoner, APS superintendent, said the high school needs an entrance where people come in through the office to get cleared. He said he hopes to have a screening system in place at all APS elementary buildings, the junior high, and the high school that can check driver’s licenses to identify any registered sex offenders.

The screening system would help deter people who shouldn’t be on campus, while alerting police of a threat, if necessary.

“If someone walks through the front door, we have nothing that keeps them from walking into a classroom,” VanWagoner said. “This would act as a barrier that would not let you into the rest of the building without going through the office and getting checked.”

The primary focus of the work is to control access into the facilities, Phil Niemi, associate structural engineer at Integrated Designs Inc., the district’s architect on the bond project, said in an email to The News.

“Design of the secure vestibules will be a collaborative process with APS and law enforcement,” said Luke Gerhart, senior project manager at Wolgast Corp., the district’s construction manager. “Designing the spaces with proper hardware and sight lines will allow APS staff vastly improve the security of all students and staff in the district.”

Niemi said security-related improvements at APS buildings will be implemented in the next four to five years. Early projects, such as the installation of cameras and replacing the key-code scanners at all the buildings will happen this year. Construction for bigger projects will start in 2021, at the earliest. Gerhart said additional projects should be completed each year through 2025.

School security has been a growing concern nationwide as school violence has increased in recent years.

About 38.5 million U.S. public school students (78%) were enrolled in a school where a violent incident occurred, the National Center for Educational Statistics said in its latest data released in March.

In 2019, eight people were killed and 43 were injured in 25 shooting incidents on school grounds or during school-sponsored events, according to Education Week. Seven of the 25 shootings took place inside the building and during school hours. There were no school shootings in Michigan that year.

According to the Michigan Department of Education, there were seven victims of violence in the 2018-19 school year at Alpena High. At Sanborn Elementary School, there was one victim of a violent crime. There were no victims at other APS schools that year.

VanWagoner said cameras would most likely be placed outside entrances and hallways, not in classrooms. A lot of the cameras located at the high school and junior high do not function right now, and none of the elementaries have security cameras.

The security upgrades will definitely offer more of a safety net for the kids at the high school, said Molly Dickinson, who graduates this year and was a member of the student leadership group at the high school.

“At Thunder Bay Junior High, they have a buzzer where you have to ring the doorbell and the door will unlock,” Dickinson said. “I think that would be a great idea if we could get that at the high school, just because we have so many kids going in and out for Early College. It just makes the building seem more safer and secure, and especially since the building is so spread out.”

Kristin Barden, Ella White Elementary School Parent-Teacher Organization president, is a mother of three, two of whom attended Ella White. She recalled the time students were on lockdown in March 2018 because a person allegedly tried to enter the school with a gun. Police never found anyone, and no arrests were made.

Barden said the buzzer system at Ella White has helped greatly in monitoring the flow of visitors entering and leaving the building. Teachers and staff have been proactive in making sure kids are safe, but Barden said upgrading security will act as an extra step for everyone’s safety.

“You never want to be the school that it happens to,” Barden said. “With these measures in place, I absolutely do think, if something were to ever happen, that these are the measures needed to save and protect any of the children in the schools. I think we’re pretty lucky with where we live and the chances of something bad happening are pretty low, but you just never know.”

Check out Monday’s edition of The News to see how people, not just infrastructure, play a role in keeping kids safe.