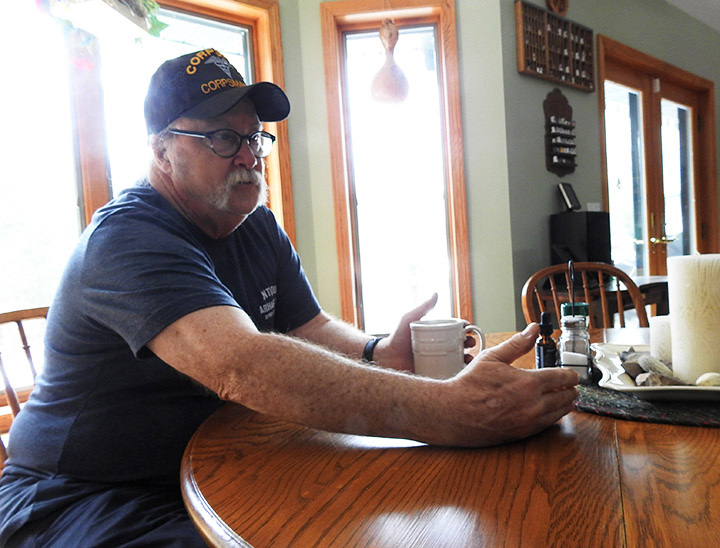 News Photo by Julie Riddle Lincoln resident Greg Oke describes the social distancing he and his wife, Ellen, are practicing after returning from a shortened winter in Florida.

ALPENA — “I think we got back just in time,” Greg Oke said, back at his kitchen table in Lincoln after a several months’ stay in Florida.

One of the many Up North snowbirds who spend the winter months in southern sunshine, Oke cut his visit to Florida short this year, cancelling a planned meandering trip home in April, because of the nationwide spread of the coronavirus.

Indeed, the virus is spreading across the nation just as many snowbirds would normally be returning from the South, Southwest, or West, the pandemic scrambling plans for many of them. Some are staying put, while others, like the Okes, cut their time away short.

Meanwhile, many Up North residents are hoping snowbirds and downstate folks with summer cottages in northern Michigan will stay put.

“We are recommending that everyone follow the governor’s orders: Do not travel unless it is for legitimate life-supporting reasons for you or your family,” Mary Beth Stutzman, president and CEO of the Alpena Area Convention and Visitors Bureau, told The News. “Now is not a good time to take a trip to your cabin six counties away. The purpose of these guidelines are to slow and contain the spread of the virus. Hopping in a car and driving up north is not slowing the spread, it is speeding up the spread.”

While domestic travel has not been restricted, the Transportation Security Administration and U.S. Centers for Disease Control and Prevention are performing more health screenings at airport security checkpoints — and allowing larger bottles of hand sanitizer into carryon bags.

As of Wednesday, there remained no confirmed cases of the virus in Alpena, Presque Isle, Montmorency, and Alcona counties.

And there was some good news

To help small businesses affected by the coronavirus closures, Target Alpena and the Otsego County Economic Alliance each have $200,000 to grant to small businesses in Alpena, Alcona, Presque Isle, Cheboygan, Iosco, Montmorency, Ogema, Oscoda, Otsego, Crawford, and Roscommon counties. Visit alpenachamber.com for information and to apply by 5 p.m. April 3.

At their subdivision in Tampa, panic hadn’t set in when Oke and his wife, Ellen, pulled out early last week, Oke said. Stores had supplies and people were still getting together for barbecues and dart games, albeit outdoors.

Numbers of positive tests and deaths were rising nationally, though, and rumors were beginning to fly.

It was time to go home, the couple decided.

Home — to the Okes, a spacious house in a woodsy Lincoln neighborhood — has pantries full of food to last a long time, a back yard to wander, and guns at hand.

“When people run out of things, they go looking for things,” Oke said, noting a feeling of panic he’s sensed in some northern Michiganders since arriving home to find businesses short on toilet paper and other staples.

A former firefighter and Navy corpsman, Oke instinctively envisions the worst that could happen.

Family members fretted about the couple when they were onboard a cruise to the Caribbean Islands, which docked shortly before a cruise ship carrying coronavirus-infected passengers was stalled for days off the coast of California.

Nobody on their ship was sick, Oke said.

The drive home was quiet, Oke said, with significantly more truckers on the road than usual, and fewer cars — most of them headed home to northern states, judging by the license plates. Restaurants were open — although, the couple said, their neighbor who just arrived home from Las Vegas refused to stop at them, eating cold pizza the whole way, instead.

Now home and feeling more secure, Oke said he has washed his hands more in the last week than in the past 20 years. They don’t plan to go anywhere for a good while, relying on their supply of food that, he said, should be enough to last them for a year, if necessary.

The couple’s grandchildren, plans of a spring trip to Myrtle Beach thwarted, mourned their loss and asked what they were going to do with their extra time.

“I told them, do what everyone else is doing. Sleep,” Ellen Oke said. “It’ll be over soon.”

Gary and Paula Pietsch, who summer in Rogers City and winter in Florida, are staying put in the southern sunshine, at least for now.

Everything has shut down in their gated community, Gary Pietsch said, from golf to pickleball to the annual Goodby Snowbirds dance. Residents are doing a lot of walking and biking, Pietsch said — “and staying inside.”

Stores are offering early-morning shopping hours for seniors, but their shelves are depleted, he reported.

When their community, where COVID-19 has not yet been diagnosed, closed down the pool, the golf course, and all activities, many seasonal residents headed for their summer homes. Canadian residents, ordered by a mandate from their country, all left, he said.

Michiganders travel south because they want to live actively over the winter, Pietsch said. Now, though, he said, the only thing keeping them south is the weather.

Feeling as safe in Florida as they would be in Michigan, the couple is waiting it out, at least until the end of month, when they will reassess and decide whether to stay for another week or more.

By then, much may have changed, Gary Pietsch said.

“Time is our best friend,” he said.

Restaurants had removed half their tables. A beach was closed, cordoned off and stationed with police officers, Macomber said.

At the grocery store, shoppers were metered, only a few able to go inside at one time.

“I was beginning to worry about simply getting home,” Macomber said.

With 20-some hours between Florida and northern Michigan, Macomber and his wife, Jane, listened to national news every day as the rooms of their hotel gradually emptied of vacationers.

“They just wanted to get home,” Macomber said.

The couple’s drive north, earlier than planned and with an eye to their own health issues, was complicated by the drive-through-only status of restaurants along the way — which meant no easy access to bathrooms.

They had to wait until they reached a rest stop, Macomber said — some of which were closed, while others were packed with travellers. Their vehicle got a good wipe-down after every stop, he said.

Since they’ve arrived at home, the couple has self-quarantined, Jane Macomber wearing a mask and gloves when she has to go to the store and dropping groceries on her mother’s doorstep instead of going inside.

At the store, a friend stopped Jane Macomber, in her gloves and mask, to ask about her mom and have a friendly chat.

“And Jane said, ‘Wait a minute, I’m just back from Florida,'” Macomber relayed, “‘And I think I’d prefer to keep my distance.'”

News staff writer Crystal Nelson contributed to this report. Julie Riddle can be reached at 989-358-5693, jriddle@thealpenanews.com or on Twitter @jriddleX.