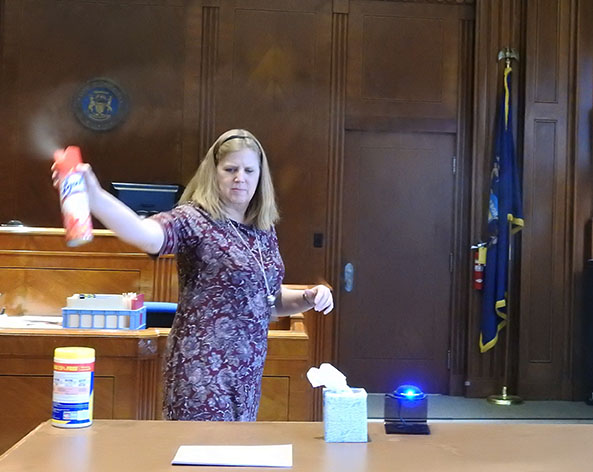 News Photo by Julie Riddle Alpena County Clerk Bonnie Friedrichs sprays disinfectant in the 26th Circuit Court courtroom on Monday. Court proceedings will be limited in the coming weeks to help prevent the spread of the coronavirus.

ALPENA — Courtrooms will be less crowded, at least temporarily, after changes suggested by the Michigan Supreme Court and implemented in Alpena.

An order released Sunday by the state Supreme Court authorized local courts to limit the number of people in courtrooms, postpone as many court-related activities as possible, and use technology to keep people from being in the same space.

The 26th Circuit Court, covering Alpena and Montmorency counties, will delay all trials, with the possible exception of those in which the defendant is waiting behind bars, court officials announced in a press release Monday.

Payments of traffic tickets and other business in the 88th District Court could still happen at the courthouse of Monday afternoon.

Some court hearings will proceed, but defendants won’t be required to be present for most hearings. Where possible, parties will be allowed to appear remotely, using teleconferencing equipment, the release said.

Parties in cases can also request that hearings be adjourned for 30 days because of the virus.

All face-to-face visits in the juvenile division, including home visits, are cancelled.

Delaying the court process “hits pause on a victim’s ability to have closure,” said Alpena County Prosecutor Cynthia Muszynski, though she’s confident courts will do everything they can to keep cases moving along while maintaining safety.

The court changes don’t make much difference for people who are free on bond, Alpena defense attorney Bill Pfeifer said — the delay may even be welcomeds by them.

People in jail, with a constitutional right to a speedy trial, however, may need to be offered another alternative, he said.

Attorneys are still permitted to meet with clients at the Alpena County Jail, but not privately, because of precautions in place to protect the jail population. They are required to use a phone system, which is usually recorded, although jail officials said they will suspend recordings for attorney calls, Pfeifer said.

Monday’s decision in Alpena may be updated within the next day or two, Chief Judge Benjamin Bolser said.

Presque Isle and Alcona counties, on Monday afternoon, both announced that their courthouses are closed to the public beginning Tuesday.